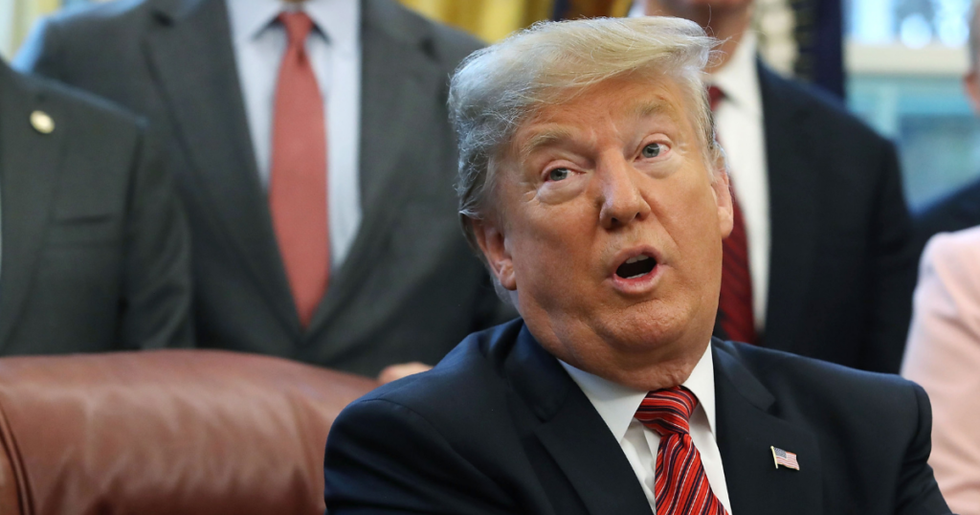 WASHINGTON, DC - JANUARY 09: U.S. President Donald Trump speaks to the media after signing Anti-Human Trafficking Legislation in the Oval Office on January 9, 2019 in Washington, DC. President Trump also spoke about the stalemate between congressional leaders to come to a bipartisan solution for more money to build a wall along the U.S.-Mexico border. (Photo by Mark Wilson/Getty Images)

President Donald Trump on Wednesday made a bizarre claim about how asylum-seeking refugees are crossing the southern border, and the internet is completely dumbfounded.

As the federal government remains shut down for the 19th day, Trump's latest and perhaps his weirdest push for a border wall went as follows:

Speaking with reporters in the Oval Office while signing an anti-human trafficking bill, Trump said migrants trying to cross into the United States possess fleets of vehicles superior to those used by Immigration and Customs Enforcement.

"The fact is if we don't have barriers, walls, call it what you want, but if we don't have very strong barriers where people can not any longer drive right across, they have unbelievable vehicles," Trump claimed without offering any evidence or specifics. "They make a lot of money."

"They have the best vehicles you can buy. They have stronger, bigger, and faster vehicles than our police have, than ICE has, than Border Patrol has."

WATCH: Trump argues that we need a border wall to stop migrants just driving right across in their "unbelievable ve… https://t.co/nqrwAp4bby
— The Daily Beast (@The Daily Beast) 1547056865.0

Trump's made-believe stampede of migrants "are very good at that," the president said, again not specifying who is "good" at what.

"They have areas they go to... it's like a highway," he added, "and we have to close 'em up. If we don't close 'em up, you're all kidding yourselves."

The Twitterverse shared some of the possible vehicles Trump has convinced himself are marauding through desert highways.

Imperial walkers are a likely culprit; too bad our Snow Speeder units are furloughed.

Could it be Tripods?

There were plenty of other guesses too.

They pretty much speak for themselves.

Would a wall stop these vehicles?

@thedailybeast A wall to stop vehicles? The vehicles come through ports of entry, numbnuts! We don’t need a wall!!… https://t.co/ARIKbPbTb1
— themocollins (@themocollins) 1547057785.0

This is your daily reminder that none of this is normal.