It Sure Looks Like the Trump Campaign Illegally Coordinated With the NRA During the 2016 Campaign, and People Are Crying Foul 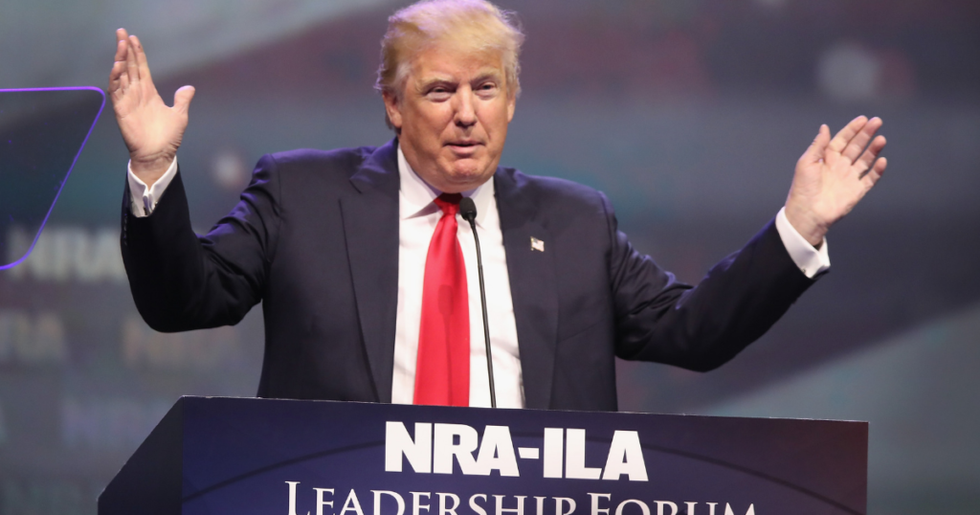 LOUISVILLE, KY - MAY 20: Republican presidential candidate Donald Trump speaks at the National Rifle Association's NRA-ILA Leadership Forum during the NRA Convention at the Kentucky Exposition Center on May 20, 2016 in Louisville, Kentucky. The NRA endorsed Trump at the convention. The convention runs May 22. (Photo by Scott Olson/Getty Images)

Donald Trump's 2016 presidential campaign may have illegally coordinated with the National Rifle Association, according to an extensive new investigative report by Mother Jones and The Trace.

The NRA outspent every other conservative group, feeding $30 million into Trump's bid for the White House. Recent filings show that media ad buys by Trump's campaign and a right-wing strategy firm called Red Eagle Media may have broken the law.

"The ads targeted adults aged 35 to 64, and aired on local news programs and syndicated shows like Jeopardy! and Wheel of Fortune. In paperwork filed with the Federal Communications Commission, Red Eagle described them as 'anti-Hillary' and 'pro-Trump.'"

Documents obtained by Mother Jones show that AMAG and RMG are both connected to a third right-wing media company, National Media Research, Planning and Placement.

This resulted in the ads for Trump's campaign and the NRA getting the green light from the same person: National Media’s chief financial officer, Jon Ferrell.

“This is very strong evidence, if not proof, of illegal coordination,” said Larry Noble, a former general counsel for the Federal Election Commission. “This is the heat of the general election, and the same person is acting as an agent for the NRA and the Trump campaign.”

The Trace's investigation found that the NRA and Trump's campaign had nearly identical strategies and some of the same people executing those plans.

"The investigation, which involved a review of more than 1,000 pages of Federal Communications Commission and Federal Election Commission documents, found multiple instances in which National Media, through its affiliates Red Eagle and AMAG, executed ad buys for Trump and the NRA that seemed coordinated to enhance each other."

Ann Ravel, a former chair of the Federal Election Commission said this was brazenly illegal.

“I don’t think I’ve ever seen a situation where illegal coordination seems more obvious," Ravel explained. "It is so blatant that it doesn’t even seem sloppy. Everyone involved probably just thinks there aren’t going to be any consequences.”

Few are surprised at the depths of corruption surrounding Trump and the NRA.

@DavidCornDC @MotherJones Didn’t Russia infiltrated the NRA and didn’t the NRA spend an unprecedented amount on the… https://t.co/ev3kRcGUiB
— Brody (@Brody) 1544126218.0

important @markfollman @MotherJones. I have been pointing out that campaign finance is the third big front in the D… https://t.co/3JkYSKsoDS
— Norm Eisen (@Norm Eisen) 1544125239.0

FEC filings show that the Trump campaign paid AMAG "more than $74 million for 'placed media' in September and October of 2016," Mother Jones found.

Because the NRA and the Trump campaign appear to have coordinated, different rules should have applied.

"Under federal election law" Mother Jones explained, "if an independent group and a campaign share election-related information, then the group’s expenditures no longer qualify as independent and are instead treated as in-kind donations, subject to a $5,000 limit."

Preventing information sharing between mutual vendors is known as a "firewall," that "functions as a pledge not to coordinate and an acknowledgment that there are civil and criminal penalties for doing so."

The public wants the truth.

The coordinated effort is evident through the amount of money spent by the Trump campaign and the NRA.

"During the last week of October, for instance, Red Eagle bought $36,250 worth of ads on the ABC affiliate in Cleveland, Ohio, on behalf of the NRA. A form the NRA filed with the station described spots mentioning the Second Amendment, Hillary Clinton, Donald Trump, and the 2016 presidential election."

"At the same time, AMAG spent almost the exact same amount—$36,150—on a series of Trump campaign ads on the same Cleveland station during the same week. Both the NRA ads and the Trump ads aired during many of the same programs, including local newscasts, Good Morning America, and NCAA football."

The lack of firewall has experts crying foul.

“It is impossible for these consultants to have established firewalls in their brains,” Brendan Fischer, the Director of the Federal Reform Program at the Campaign Legal Center, said. “We have not previously seen this level of evidence undermining any claim of a firewall.”

One Republican strategist Rick Wilson said campaign coordination with outside groups is meant to get the best bang for their advertising buck.

"Modern campaigns are driven by data,” he said. “Pollsters and analytics people will give you a set of targets, and you want to address those targets as best you can, in as many markets as you can.”

On September 15, 2016, the NRA purchased ads during ACC college football games, followed by the Trump campaign mirroring the same buys a week later.

Records from Raycom Sports Network, through which the NRA bought the ads, show exactly how similar the two entities' purchases were.

“Sometimes you want to maximize the lowest unit rate on the campaign side,” Wilson added. “But you still need more fire on the target. This is why the FEC says coordination is illegal.”