Donald Trump Is Trying to Discredit Bob Woodward After Brutal Excerpts of His New Book Were Released, But People Aren't Buying It 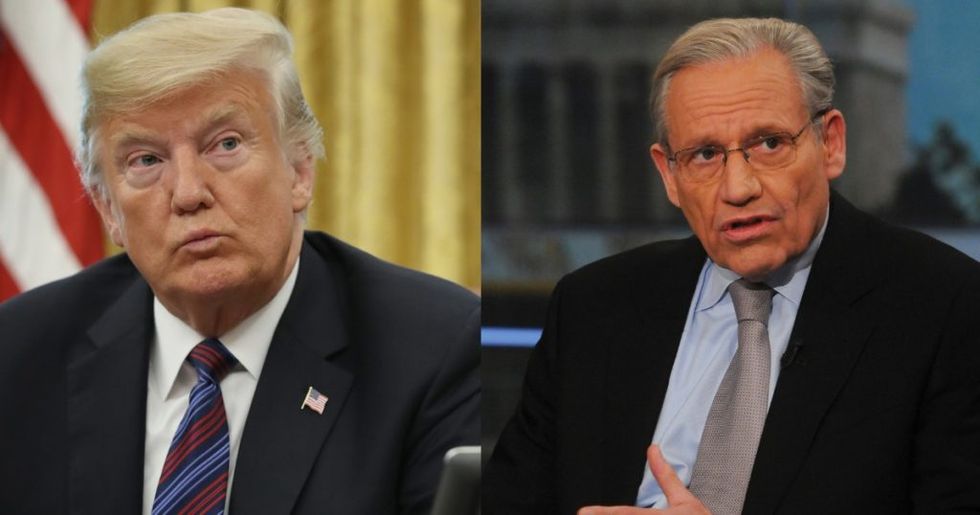 President Donald Trump is reeling over the release of Bob Woodward's new book, Fear: Trump in the White House, as evidenced in an interview he gave with the Daily Caller on Tuesday.

The book, which is scheduled for release on September 11, reveals turmoil and drama inside the West Wing as told by current and former administration officials.

"It’s just another bad book," Trump said of Fear. Trump added that Woodward, whose investigative reporting prowess was established during Watergate, "has had a lot of credibility problems."

Trump suggested that Woodward was out to get him and only wanted to make him look bad.

"I probably would have preferred to speak to him, but maybe not," Trump lamented. "I think it probably wouldn’t have made a difference in the book. He wanted to write the book a certain way."

Trump then referred to the book as "nasty stuff."

It’s just nasty stuff. I never spoke to him. Maybe I wasn’t given messages that he called. I probably would have spoken to him if he’d called, if he’d gotten through. For some reason I didn’t get messages on it.

Trump also doubted the book's veracity, saying that many of the claims could have come from "disgruntled employees or just made up."

"It could be just made up by the author," the president said.

The Washington Post released excerpts of Fear on Tuesday, several of which were particularly bothersome to Trump.

"It’s just made up” he griped. "There was nobody taking anything from me."

Which Woodward himself noted:

Others were not buying Trump's attacks on Woodward.

Trump decides that The Daily Caller is the outlet to which he will accuse Bob Woodward of having “credibility probl… https://t.co/xYvTPUT6VS
— Daniel Dale (@Daniel Dale) 1536093310.0

@ddale8 @washingtonpost was smart to release the audio of Bob Woodward calling Trump to explain that he had tried u… https://t.co/N9PRTbENDu
— Geneviève (@Geneviève) 1536093907.0

Indeed, this is true; Trump and Woodward spoke on August 14 and the transcript of the call was released by the Washington Post on Tuesday.

Woodward explained to Trump that he had amassed "hundreds of hours" of recordings with various senior staffers who spoke on condition of anonymity.

Trump told Woodward that he is "doing a great job for the country" and that he is the best president ever.

Well, accurate is that nobody’s ever done a better job than I’m doing as president. That I can tell you.

Trump has actually defended Woodward in the past - when it was beneficial to Trump.

A week later, Trump said: "only the Obama WH can get away with attacking Bob Woodward."

And last year, Trump thanked Woodward for saying he was "right to be angry" over the release of the Steele dossier.

Of Trump or Woodward, who has more credibility?