Donald Trump Tried to Claim That 35,000 People Attended His Rally in El Paso, but Local Law Enforcement Had the Receipts 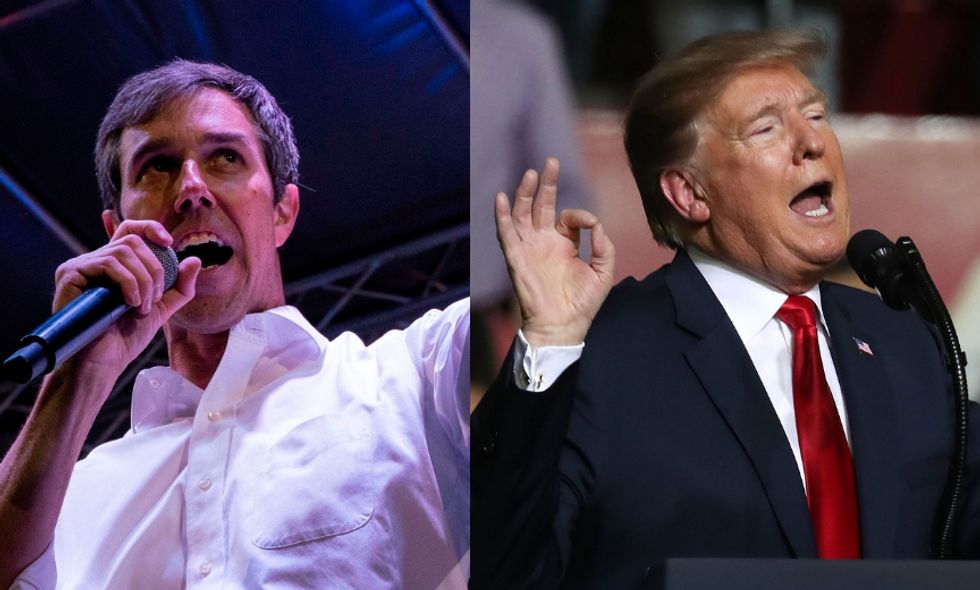 President Donald Trump and former Democratic Congressman Beto O'Rourke held dueling rallies in El Paso, Texas Monday night, and Trump was once again busted for lying about the size of his crowd.

Before arriving in Dallas, Trump had already set the stage for another showdown over how many people were attending his event.

"We have a line that is very long already. I mean, you see what’s going on," Trump said at a White House event with sheriffs. "And I understand our competition’s got a line, too, but it’s a tiny, little line."

Trump also incorrectly boasted right before the rally started that “69,000 signed up to be here," adding that "the arena holds about 8,000."

When Trump took the stage, the distortions continued.

"Beto trying to counter-program @realdonaldtrump in his hometown and only drawing a few hundred people to Trump’s 35,000 is a really bad look," Junior tweeted. "Partial pic of the Trump overflow crowd below! #AnyQuestions"

According to figures provided by local law enforcement, however, the Trumps were lying. Zahira Torres of the El Paso Times reported that only 6,500 people were allowed inside the El Paso County Coliseum because that is the building's maximum capacity.

@DonaldJTrumpJr @realDonaldTrump Why are we still worried about crowd size? You should be worried about being indicted
— C (@C) 1549943571.0

Meanwhile, The Texas Tribune pegged O'Rourke's crowd at more than 7,000, although Bloomberg's Jennifer Epstein noted it was somewhere between 10,000 and 15,000 - nearly double that of Trump's.

We have the receipts for it, too.

@BetoORourke Thank you @BetoORourke for your thoughtfulness to do this rally. For every Trump rally, there should… https://t.co/WUYdVlgP0x
— eyeswideopen (@eyeswideopen) 1549943029.0

Size matters and so does the truth.