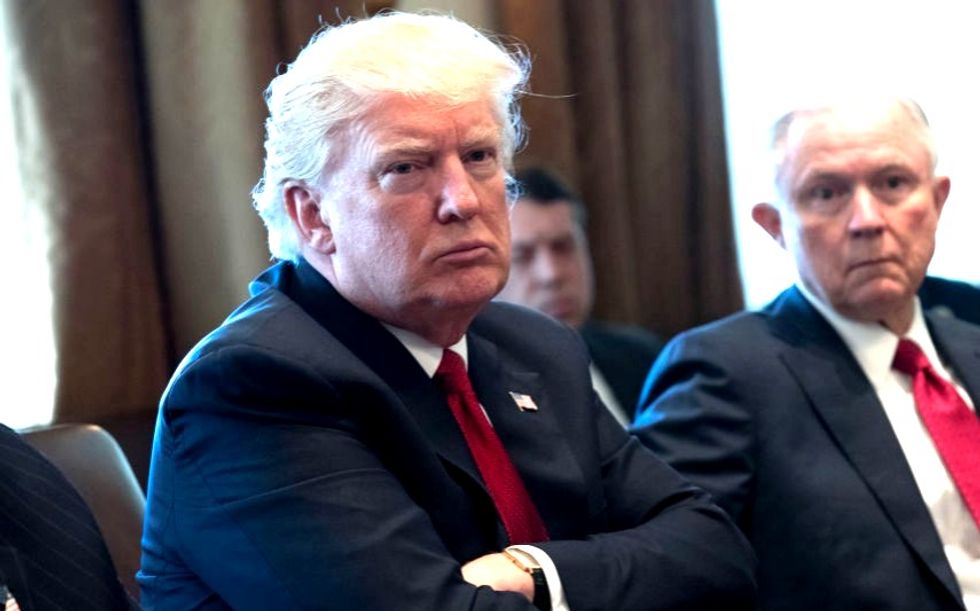 President Donald Trump received criticism on more than one occasion while on the campaign trail about repeating the conspiracy theories he hears on his preferred media outlets: Fox & Friends, Alex Jones' Info Wars, Gateway Pundit and Steve Bannon's (formerly) Breitbart.

Once he became president, Trump still repeats false claims even after they are easily disproven. Especially when they can be used to deflect from his own very real legal woes and legitimate administration scandals.

Rarely does anyone from his own administration correct his misinformation. But the Attorney General Jeff Sessions led Department of Justice (DoJ) just did.

Back in April, Trump posted a tweet about an ongoing DoJ case, trying to deflect from the information coming out after the FBI raided his longtime lawyer, Michael Cohen's, home and office. The raid was part of an open investigation into potential illegal activity by the New York federal prosecutor's office,  a division of Trump's DoJ.

Trump, after his claim that the raid proved due process was dead, tried to shift focus from himself to the Democratic Party and the prosecution of DNC staffer Imran Awan, who is a "Pakistani mystery man" according to the president.

In a rambling tweet, Trump threw accusations at a host of characters: "Obstructionist Democrats", Debbie Wasserman Schultz, the "DNC Server", "Clinton Emails" and "Documents held by the Pakistani mystery man."

Just heard the Campaign was sued by the Obstructionist Democrats. This can be good news in that we will now counter… https://t.co/77ChXaPzvm
— Donald J. Trump (@Donald J. Trump) 1524266391.0

Then again in June, Trump brought up Imran Awan again, by name. At the time, Trump was dealing with the fallout from a trade war he started, the off-again/on-again North Korean summit and continued revelations from the Mueller Russia investigation.

The president cried foul to the idea of a DNC staffer receiving a plea agreement from the DoJ. This was after several of Trump's own campaign and administration members reached plea agreements during the Mueller investigation into Russian interference in the 2016 presidential election and ties to the Trump campaign.

Tuesday, the Justice Department finally responded with a special note in their plea deal with Awan. It states:

Particularly, the Government has found no evidence that your client illegally removed House data from the House network or from House Members’ offices, stole the House Democratic Caucus Server, stole or destroyed House information technology equipment, or improperly accessed or transferred government information, including classified or sensitive information."

The federal prosecutors note addresses all of the claims in several conspiracy theories about Awan and the DNC. Theories the president repeated.

The note has no bearing on the plea deal and is unrelated to any charges brought against Awan. Their only purpose appears to be to get the truth out there and refute any lies still being told.

So the DoJ took the opportunity to publicly set the record straight on at least one of their cases.

The intended target of the DoJ note was not missed by social media.

@NatashaBertrand I hope Awan sues the shit out of @TuckerCarlson @FoxNews and Trump for defamation and slander.
— The Duchess (@The Duchess) 1530638191.0

@NatashaBertrand No missing server no smashed cel phones. Fox and Trump persecuted Mr Awan tried to use him as a sc… https://t.co/cRqmNYxBP0
— jmbler (@jmbler) 1530638842.0

@NatashaBertrand I'm sure they're all updating their badly made memes in MS Paint to reflect the updates in this investigation.
— Funkasaurus (@Funkasaurus) 1530644757.0

@NatashaBertrand So all he was found guilty of was making a false statement on a bank loan? Wll the right wingers… https://t.co/AVlQ3bRer6
— Jane Moore (@Jane Moore) 1530637887.0

Will this lead to a new era of Trump administration officials telling the truth even if their boss doesn't? Probably not. But it does show some folks in the trenches have decided to speak up.