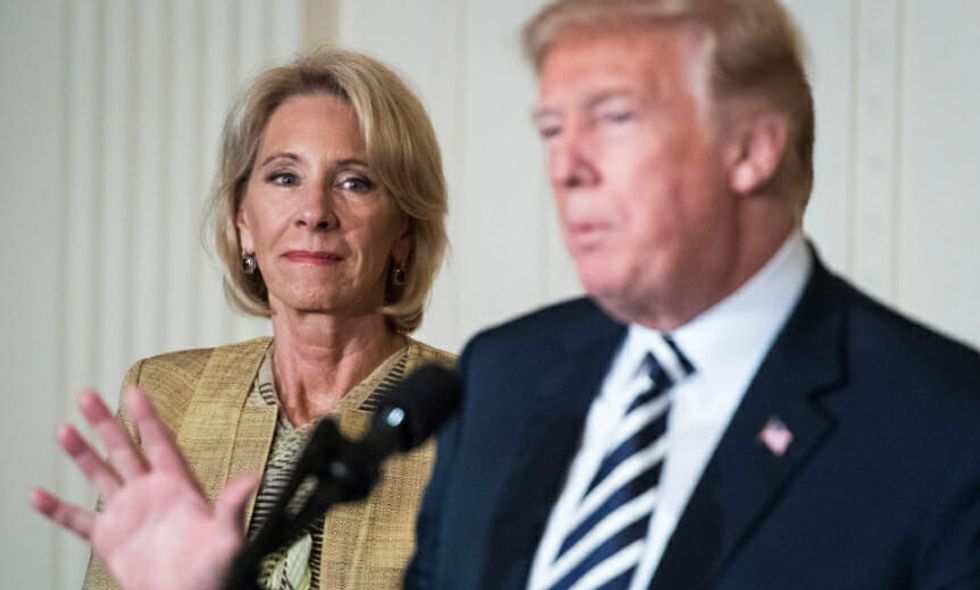 WASHINGTON, DC - MAY 2: Secretary of Education Betsy DeVos listens as President Donald J. Trump gives remarks at the National Teacher of the Year reception in the East Room of the White House on Wednesday, May 02, 2018 in Washington, DC. (Photo by Jabin Botsford/The Washington Post via Getty Images)

Even if the unthinkable happens and Trump is elected for a second presidential term, Education Secretary Betsy DeVos won't commit to retaining her position for another four years.

During a Q&A session at the Education Writers Association national seminar in Baltimore, DeVos was asked whether she would serve another term as Education Secretary, and she wouldn't commit.

With an empowered "I’m not sure my husband would be okay with that," DeVos declined to say whether she would continue to serve if Trump wins in 2020.

DeVos is one of Trump's longest-serving cabinet members, and has acted as the figurehead for Trump's proposed budget to cut $7.1 billion from Education Department funding. DeVos advocates for what she calls the "school choice" project, which would divert funding away from public education and instead use tax cuts to provide scholarships and vouchers for students to attend private school. She recently came under fire for cutting funding for the Special Olympics.

DeVos has faced derision for her anti-public education stance, especially at a time when teachers are struggling to secure enough funding to run their classrooms.

"Mobilizing behind a scheme to further starve public schools and nine in 10 American students of the resources they need is not only unresponsive but insulting, and it reflects this administration’s persistent disdain for public education," said JoAnn Bartoletti, the executive director of the National Association of Secondary School Principals.

DeVos' reluctance to commit to another term, even if Trump wins the 2020 election, elicits no tears from Twitter - unless you count tears of joy.

With DeVos in charge of the budget, her school choice program would offer 100% tax cuts to individuals and corporations "for contributions to state-sanctioned scholarship funds." It would also cut funding for public education, and eliminate subsidized loans for college students.

One can only hope.