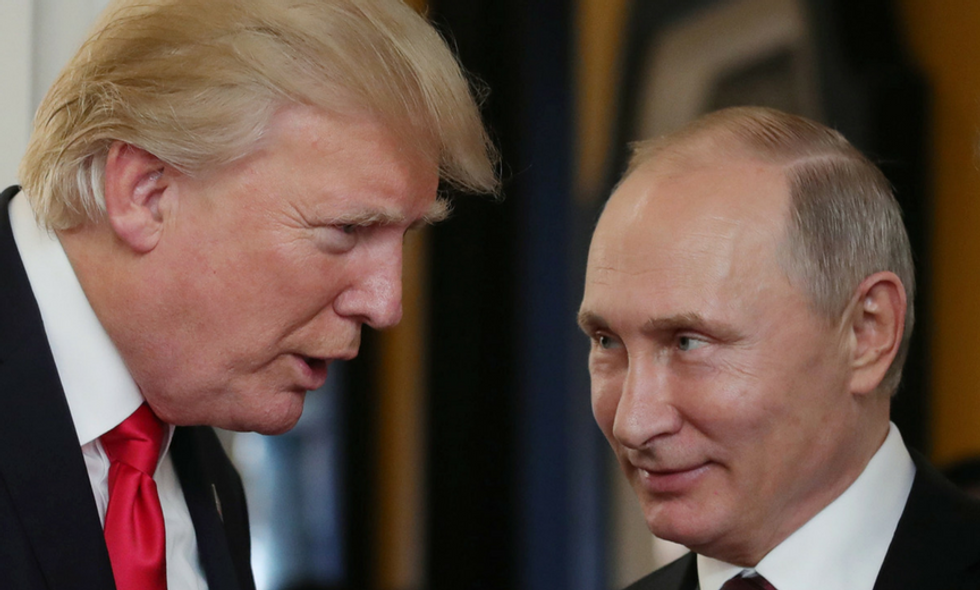 The Daily News is no stranger to visually arresting covers, nor is it shy in its criticism of President Donald Trump. Its latest cover invokes both.

It depicts Trump holding hands with Russian President Vladimir Putin on Fifth Avenue as the President of the United States shoots Uncle Sam in the head.

If Trump shooting someone on Fifth Avenue sounds familiar, it should, it's a call back to Trump's own words during the 2016 campaign:

"I could stand in the middle of 5th Avenue and shoot somebody and I wouldn't lose voters."

The Daily News has resurrected the Fifth Avenue quote one day after Trump and Putin's calamitous joint press conference in Helsinki. When Trump was asked if he would denounce Putin and warn him never to order an attack on American democracy again, Trump sided with Putin against his own intelligence agencies, saying he didn't "see why it would be" Russia who committed the attacks.

Users on social media felt the parallel between Trump's quote and the disastrous press conference was on point:

Just stunning to watch Fox tonight, as hosts and guests trash Trump and Putin. This could be the turning point we'v… https://t.co/MFTkLH4lKU
— Tony Schwartz (@Tony Schwartz) 1531783490.0

What was that Trump said about shooting someone in he middle of Fifth Avenue? #TreasonSummitt https://t.co/XmMbNoGPrE
— Chris Wall (@Chris Wall) 1531784057.0

The image of the president shooting Uncle Sam is particularly stunning for another reason.

Many are accusing the president of treason, and not just Democrats either.

One of those accusing Trump is self-described nonpartisan former CIA Director John Brennan, who said in a tweet that the president was "wholly in the pocket of Putin."

On July 16, the day Trump betrayed America to President Putin of the Russian Federation at the Summit in Helsinki,… https://t.co/bjLa8hbC4T
— Laurence Tribe (@Laurence Tribe) 1531830347.0

The symbol of Trump shooting Uncle Sam is also cutting when considering the actions of the Russian president with whom Trump sided.

Vladimir Putin has routinely sought to disrupt and erode Western democracies, and sharply increasing his efforts with the invasion of Ukraine and the annexation of Crimea, both in 2014. Putin and his cronies consistently sow hatred of LGBTQ people, painting queerness as a Western evil. The portrayal helps destabilize democracies and reap anti-LGBTQ violence.

Putin was instrumental in electing Ukraine's fourth president Viktor Yanukovych, who ordered the killing of pro-Western protestors wanting to join the European Union. Yanukovych was later removed from office. One of Yanukovych's top advisors was Paul Manafort, Trump's disgraced former campaign chairman who currently sits in jail for witness tampering.

That the President would stand on the world stage and publicly side with a leader who orchestrated these atrocities and launched a full scale cyber attack on United States election is "disgusting" even to Fox News hosts. To many patriots, it's nothing short of shooting Uncle Sam.