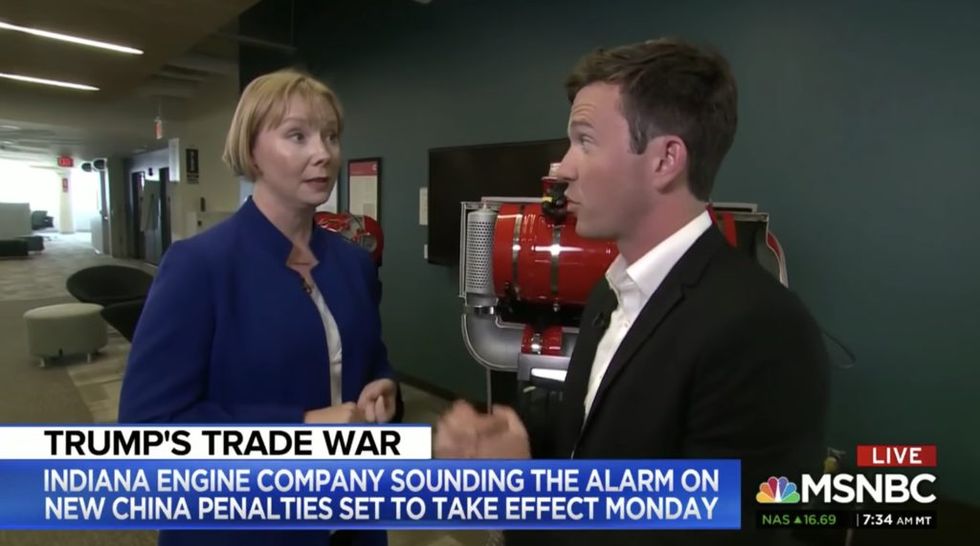 President Donald Trump's tariffs on Chinese imports is hurting an iconic American company based in Columbus, Indiana, which is the hometown of Vice President Mike Pence. A representative of Cummins Manufacturing went on MSNBC to raise the alarm of how much the president's trade war is costing their business.

Speaking with MSNBC's Vaughn Hillyard on Friday, Tracy Embree, president of Cummins' components division said Trump's tariffs on steel and aluminum have had a "pretty significant impact on us with some of our engines, specifically a piece called blocks and head."

Cummins, the world's largest producer of diesel engines, has "no source in the U.S. for those parts," Embree explained. "Right now capacity is not available, with the exception of suppliers in China."

The total financial impact on the company so far in 2018 is $100 million, which adds up to "$200 million annually," according to Embree.

Embree said Cummins is "aligned with the goals of the administration on the creation of strong trade agreements that are fair," but that "tariffs are not the right answer to accomplish that."

Following her interview, Embree tweeted that international trade "has been the single biggest contributor to growth" for Cummins "for more than a decade."

Spent part of the afternoon with @VaughnHillyard from @NBCNews talking about int’l trade and how it’s been the sing… https://t.co/IFaixWsTdU
— Tracy Embree (@Tracy Embree) 1537473218.0

As governor of Indiana, Pence cut taxes and set up trade deals with China specifically to benefit Cummins, which has grown into a $20 billion company.

Since Trump and Pence took office, however, Cummins has expressed concern over the administration's trade policies.

In July, Cummins CEO Tom Linebarger told The Washington Post that he was "very worried" about potential job losses due to the company's dependence on Chinese exports.

"We will do everything we can to mitigate . . . the impact to jobs," Linebarger said. "It’s very clear, though, that we’re not going to be able to mitigate everything."

The Brookings Institution found in 2017 that the Columbus, Indiana region, also the hometown of Pence, is the most export-reliant area in the United States.

"Over half of the economy in Columbus, IN is driven by exports, largely due to its machinery manufacturing cluster," Brookings said in a report released shortly after Trump's inauguration.

WaPo explained just how much is at stake in Columbus:

"Pence’s hometown oozes internationalism: 40 foreign companies have a presence, more than half of them Japanese engines and auto-parts plants, employing almost 10,000 people. The area’s schools collectively speak 51 languages. The city ranks second in the nation in the per capita percentage of H-1B visas for foreign workers."

In a July op-ed in the New York Times, Linebarger explained: "International trade has been the single most important contributor to growth and hiring at Cummins for nearly two decades."

"Let’s be clear: a tariff is a tax, plain and simple."

On China, @Cummins CEO Tom Linebarger says, "unilateral and escalating #tariffs are not the answer," as he urges a… https://t.co/WPjZQrwN4J
— Trade For America (@Trade For America) 1532541616.0

"Half of our business is outside the United States," he said, "and more than 20 percent of the 25,000 Cummins jobs in America are directly tied to international business."

One engine in particular produced by Cummins "was developed in the United States but is manufactured in China for the Chinese market." Approximately 5,000 of these engines are exported from China to the United States every year.

Due to Trump's tariffs, Linebarger said: "This product — developed by American engineers and sold by an American company — faces a 25 percent tariff here at home and must compete against products from European and other Asian engine manufacturers that are not subject to the tariffs."

Linebarger added that Trump's tariffs "put us in a worse position now than when we started these negotiations, and we are concerned there is no end in sight," and that he sees "no upside in the implementation of tariffs."

"The mere threat of tariffs results in significant costs for Cummins that cannot be recovered."

In January, Linebarger met with Trump at the White House to try to dissuade him from imposing tariffs on imported steel and aluminum, but to no avail.

"Our advice was not to do tariffs . . . but obviously, it did not persuade," Linebarger told the Post. "Their view of what’s eventually good for our company differs to mine."