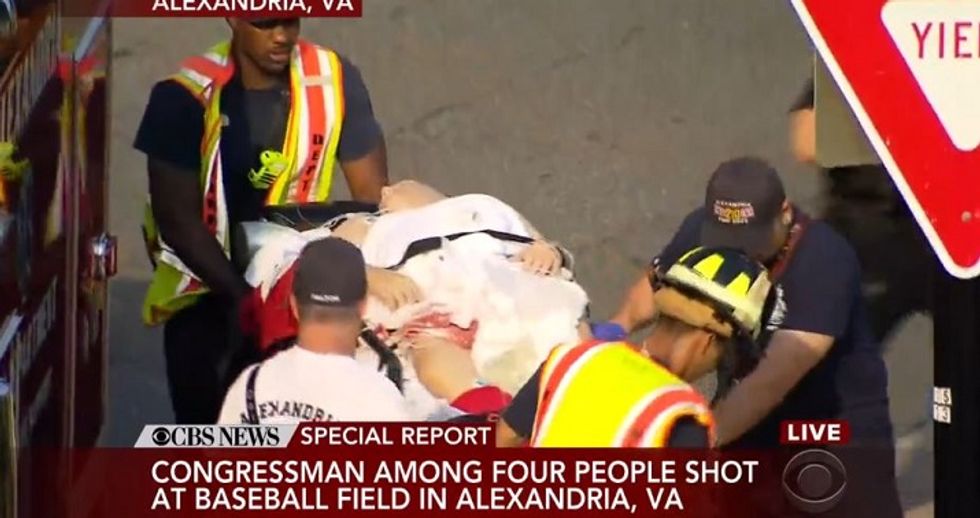 UPDATE: Authorities have identified the gunman as James T. Hodgkinson, 66, from Belleville, Illinois. Hodgkinson died from injuries sustained in a gunfight.

A gunman opened fire on members of Congress practicing for a charity baseball game this morning at Simpson Field in Alexandria, Virginia. Representative Steve Scalise (R-LA), the House Majority Whip, was injured during what appeared to be a "deliberate" attack, according to Representative Mo Brooks (R-AL), who was on deck at the time of the shooting. At least five other people, including Congressional aides, were also wounded.

Brooks described hearing a loud bam, seeing a rifle, and then hearing another bam before hearing Scalise scream.

“He [the shooter] continues to fire at different people, you can imagine all the people on the field scatter," Brooks said. "I run around to the first base side on the batting cage … and hide behind the plastic. … Gunfire continues. Heard a break in the gunfire and decided to take a chance.”

“There must have been 50 to 100 shots fired,” Brooks continued, noting that the shooter started circling around third base after shooting at the Congressman's security detail. “My understanding it that’s where our security detail….still defending us, took him down. Once we got the all clear that the shooter was down, we went out to the outfield for Steve Scalise, he had crawled out in the outfield leaving a trail of blood.”

Representative Ron DeSantis (R-FL), who left the field shortly before the shooting occurred, told reporters that he spoke to a man––who sources described as a white male––who stopped him as he walked to his car. The man asked DeSantis if Republicans or Democrats were practicing on the field. The shooting began three minutes later, around 7:15 AM, DeSantis said.

The White House said in a statement that President Donald Trump is monitoring the situation. The Department of Homeland Security is also looking into the incident. The suspect is reportedly in custody.

Both @POTUS & @VP are aware of the developing situation in Virginia. Our thoughts and prayers are with all affected.
— Stephanie Grisham (@Stephanie Grisham) 1497441686.0

"The Vice President and I are aware of the shooting incident in Virginia and are monitoring developments closely," Trump said in a statement. "We are deeply saddened by this tragedy. Our thoughts and prayers are with the members of Congress, their staffs, Capitol Police, first responders, and all others affected."

Scalise is the first member of Congress to be shot since former Arizona Representative Gabrielle Giffords survived an assassination attempt in January 2011. Giffords was shot in the head by Jared Lee Loughner during an event outside a Tuscon grocery store. Six others were killed and an additional 12 were injured during the attack.