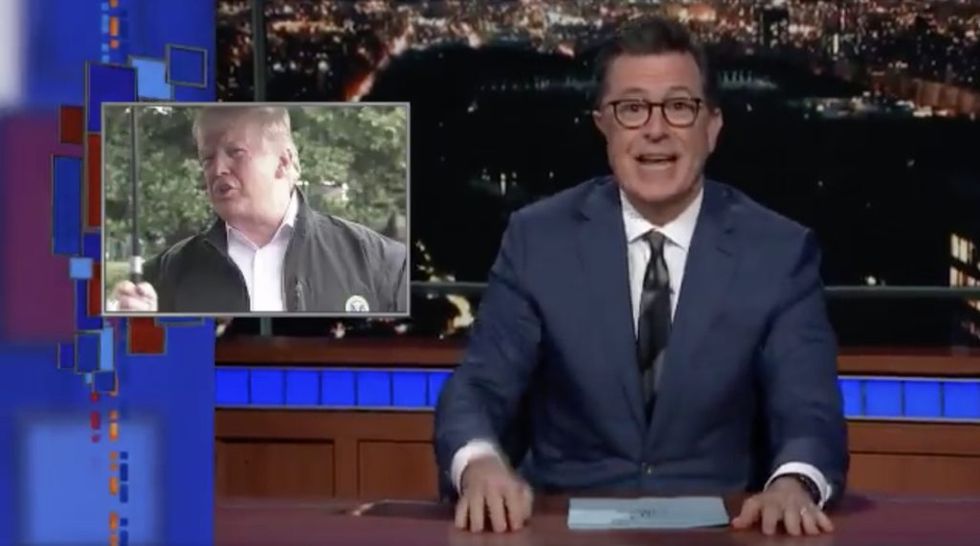 Stephen Colbert addressed the latest development in the feud between Senator Elizabeth Warren (D-MA) and President Donald Trump after she released a DNA test that provides “strong evidence’’ she has some Native American ancestry. Warren's claims to Native American blood had repeatedly been mocked by the president, who nicknamed her "Pocahontas."

"Well, after years of mocking Elizabeth Warren, clearly the president must have had a lot to say about these test results,” Colbert said, who noted that the president responded, "Who cares?" to the news.

“You care!” Colbert told the president, recalling the president's boast that he would donate $1 million to charity if Warren took a DNA test. “You’re literally the only person who cares."

Colbert also commented on Trump's denial that he had offered to donate to charity if Warren could prove her ancestry. "You better read it again," Trump told reporters.

“Oh, we don’t have to read it,” Colbert said. “Luckily enough, we’re going to have somebody read it for us.”

He then played the clip of Trump making that promise last summer.

I’m going to get one of those little kits and in the middle of the debate, when she proclaims she’s of Indian heritage — because her mother said she has high cheekbones, that’s her only evidence,” Trump said at the time. “We will take that little kit, but we have to do it gently, because we’re in the ‘me too’ generation, so we have to be very gentle.”

"I have a feeling she will say no," Trump said after making his initial offer.

“Well, Mr. President, she didn’t say no, she said yes,” Colbert commented. “But rumor has it, you don’t know the difference."

Colbert is far from the only one to criticize Trump for walking back his $1 million offer.

Will you pay the $1 Million to Elizabeth Warren’s charity of choice now after your racist attacks? trump: I NEVER… https://t.co/TIFoY5atqj
— Ricky Davila (@Ricky Davila) 1539633973.0

Trump has regularly revived his “Pocahontas” nickname for Warren and challenged her to submit to a DNA test to prove her Native American heritage.

The president––and many of Warren’s critics––have claimed that Warren used false claims of Native American heritage to gain an edge over other candidates for a faculty position at Harvard University. However, a simple fact check indicates that these claims don’t hold under scrutiny.

As Snopes notes, “specific evidence that she gained her position at Harvard (at least in part) through her claims to Native American heritage is lacking.” Moreover, several people with whom Warren worked at Harvard, including David Bernstein, who is the former chairman of the American Association of Law Schools, have said that her ancestral background did not factor into the professional opportunities she received while employed at Harvard.

After Trump made his initial $1 million offer, Warren hit back, taking the Trump administration to task for the humanitarian crisis they’ve created––and exacerbated––along the U.S.-Mexico border.

Hey, @realDonaldTrump: While you obsess over my genes, your Admin is conducting DNA tests on little kids because yo… https://t.co/2Mkx0hywOY
— Elizabeth Warren (@Elizabeth Warren) 1530834774.0

Warren’s response was a reference to reports that the U.S. government is performing DNA tests on children and parents in an attempt to reunite migrant families separated at the border as a result of the Trump administration’s “zero tolerance” family separations policy.

The Department of Health and Human Services had announced it would conduct DNA tests by taking a cheek swab of every child before matching him or her with a parent. The move came after a federal judge in the Southern District of California ordered that the government must reunite parents separated from children younger than 5 by July 10 and children ages 5-17 by July 26. The goverment is now well past deadline.