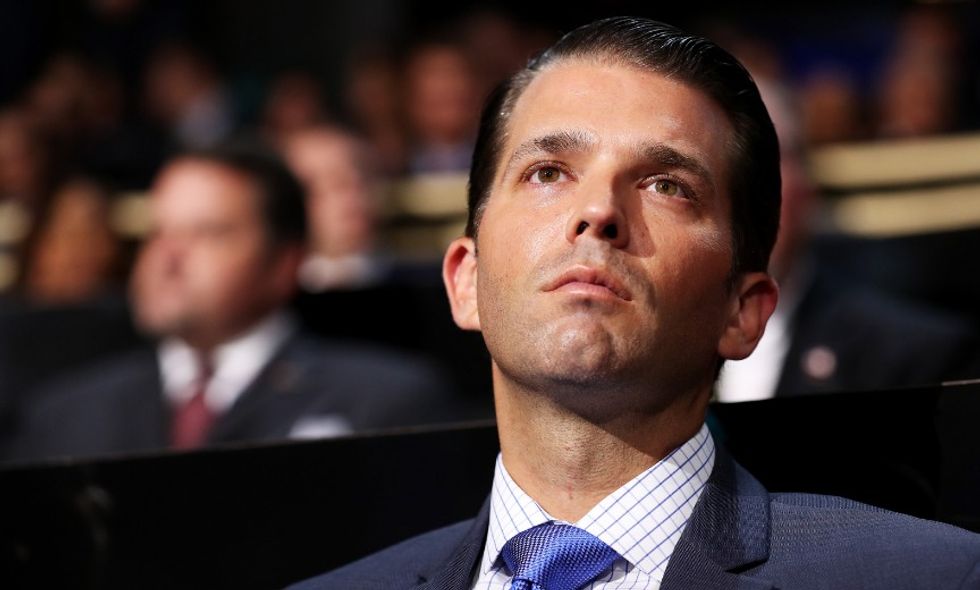 CLEVELAND, OH - JULY 18: Donald Trump Jr. listens to a speech on the first day of the Republican National Convention on July 18, 2016 at the Quicken Loans Arena in Cleveland, Ohio. An estimated 50,000 people are expected in Cleveland, including hundreds of protesters and members of the media. The four-day Republican National Convention kicks off on July 18. (Photo by John Moore/Getty Images)

Last week, Donald Trump unveiled a provocative new web ad that accuses Democrats of allowing an illegal immigrant, who later went on to kill a police officer, into the country.

Turns out that accusation isn't true, of course, but that hasn't stopped Trump and his boosters from sharing and promoting the ad, which has widely been derided as "racist."

On Saturday, Donald Trump Jr. took to Twitter to excoriate CNN for not airing a shorter TV-ready version of the ad, saying "I guess they only run fake news."

CNN was not going to let that slide without comment, and even got a little snarky with the president's son:

@DonaldJTrumpJr CNN has made it abundantly clear in its editorial coverage that this ad is racist. When presented w… https://t.co/Ui29o3TaMW
— CNN Communications (@CNN Communications) 1541257105.0

People could not get enough of CNN's clap back:

@CNNPR @DonaldJTrumpJr Keep up the resistance against lies and demagoguery. I wish the other network news that trum… https://t.co/Upc6aYQpAg
— Luapers (@Luapers) 1541257763.0

And went after Jr.

@CNNPR @joshscampbell @DonaldJTrumpJr Because the ad is a complete lie as far as the circumstances of this criminal… https://t.co/uTFqPD0cpx
— Karen (@Karen) 1541263285.0

But some felt CNN was being hypocritical.

@CNNPR @DonaldJTrumpJr Wait...CNN refused to be paid to air this ad but did tweet it out to the masses via their of… https://t.co/7WcwjbNNJF
— Patrick Artrip (@Patrick Artrip) 1541333194.0

And some didn't find the ad -- this version at least -- racist.

But there were also those who found CNN worthy of praise for not accepting ad money to air the ad in rotation on its network:

@CNNPR @DonaldJTrumpJr Thank you @CNN, for critically thinking about it (and not just the revenue). We need more of that, everywhere.
— Danny Paskin (@Danny Paskin) 1541260034.0