Kavanaugh Ally Accused Christine Blasey Ford of Confusing Kavanaugh With Another Guy, and Ford Just Shut Him Down 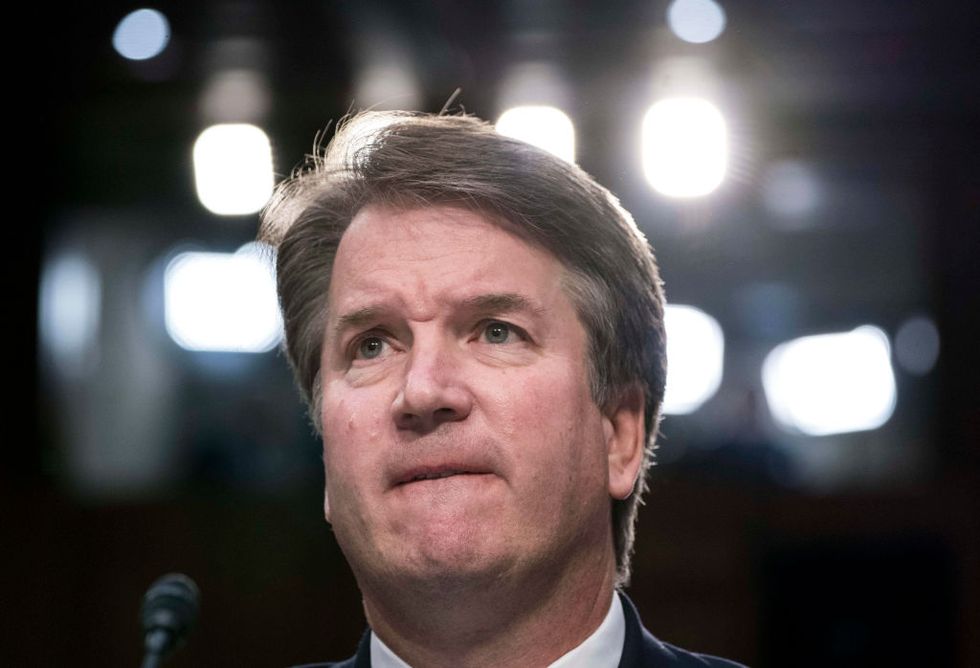 Christine Blasey Ford, the California professor accusing Brett Kavanaugh of attempting to rape her at a high school party in the 1980's, shut down a right-wing conspiracy claiming she mixed up Kavanaugh with a similar-looking classmate.

On Wednesday, Ed Whelan, a former clerk to Justice Antonin Scalia and friend of Kavanaugh, shared an op-ed in the Washington Post which asked if there could have been a "Kavanaugh-ish-looking teen at the house that night, who might have attacked Ford?"

Kavanaugh also claimed he may be the victim of mistaken identity.

In a series of tweets which have since been deleted, Whelan said Ford might be remembering the wrong man.

"Dr. Ford may well have been the victim of a severe sexual assault by someone 36 years ago," Whelan wrote. "Her allegations are so vague as to such basic matters as when and where that it is impossible for Judge Kavanaugh to *prove* his innocence."

Whelan then posted maps, images, and floor plans of the house in which Ford's assault supposedly took place, adding that "there are compelling reasons to believe his [Kavanaugh's] categorical denial."

Whelen admitted however that he "no idea what, if anything did or did not happen" despite sharing pictures of Kavanaugh and the classmate who looked like him, noting that many people "have commented on how much they resembled each other in appearance."

"I knew them both, and socialized with" Kavanaugh's doppelganger, Ford said in a statement. She said she even visited him in the hospital.

"There is zero chance that I would confuse them," Ford said.

On Friday morning, Whelan apologized on Twitter to the man he wrongfully tried to claim may have been Ford's attacker.

I made an appalling and inexcusable mistake of judgment in posting the tweet thread in a way that identified Kavana… https://t.co/h6Cvw0Ejpg
— Ed Whelan (@Ed Whelan) 1537533520.0

Twitter wants to know when Whelan is going to apologize to Ford.

@EdWhelanEPPC I see you’re not apologizing for the concept of accusing Ford of a false allegation, only for posting… https://t.co/b4VMzuKQWB
— Jessica Nichols (@Jessica Nichols) 1537536488.0

Whelan faced significant blowback on social media from people across the political spectrum.

Some people are calling for Kavanaugh's classmate to sue Whelan for libel and questions over whether Whelan's strategy was part of a Republican plan to discredit Ford.

@EdWhelanEPPC Did you discuss your theory or plans to publicly cast doubt on Ford’s allegations with any Senators o… https://t.co/FLZctBan79
— Alex Howard (@Alex Howard) 1537536491.0

@EdWhelanEPPC Still defamation, even if you apologize, especially because your accusation will get much more public… https://t.co/ymz19KwJ13
— Pé Resists (@Pé Resists) 1537538489.0

@EdWhelanEPPC You should be sued for libel and character defamation and permanently banned from the pages of @WashingtonPost and @NYT
— Sharon Gelman 🌊🌊🌊 (@Sharon Gelman 🌊🌊🌊) 1537533744.0

Ed Whelan teased that he had information that would debunk Christine Blasey Ford on Tuesday and tweeted it out Thur… https://t.co/I8B9gnroIa
— Matthew Gertz (@Matthew Gertz) 1537539528.0

Whelan is also facing calls to resign from the Policy and Ethics Center, a conservative thinktank, of which he is the president.

"You knew damn well what you were doing," one angry user fired back at Whelan.

The trouble for Whelan is that the internet is forever.