A Democratic Senator Just Announced He'll Oppose Donald Trump's SCOTUS Nominee Whoever It Is, and He Makes a Fair Point 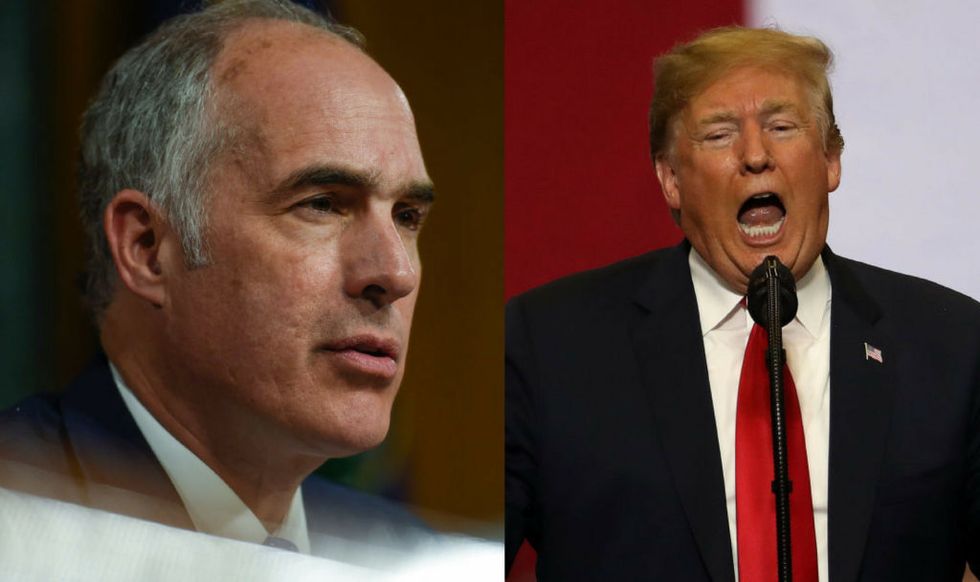 Citing Abraham Lincoln, Senator Casey insisted in a Twitter thread that Trump's list of twenty-five possible picks was recommended by the Heritage Foundation, a Republican think tank, and would be representative of far-Right interests instead of the American people.

I will oppose the nomination the President will make tonight because it represents a corrupt bargain with the far R… https://t.co/ptqL9aXfzr
— Senator Bob Casey (@Senator Bob Casey) 1531151426.0

Casey was widely praised on social media for his line in the sand.

@SenBobCasey Thank you for representing the citizens of Pennsylvania with our best interests in mind
— Coccopuff 🌊 (@Coccopuff 🌊) 1531154541.0

@SenBobCasey I haven't lived in PA for almost 4 years now but rest assured that I always appreciated the work you d… https://t.co/j52HyosZCZ
— Patrick McBride (@Patrick McBride) 1531157365.0

Casey elaborated on his decision in a statement:

In a nation with over 700 sitting federal judges, many of whom were appointed by Republican presidents, it is outrageous that President Trump will nominate from a list of just 25 dictated to him by the Heritage Foundation. This list is the bidding of corporate special interests hell-bent on handing health care over to insurance companies, crushing unions that represent working men and women, and promoting policies that will leave the middle-class further behind. Any judge on this list is fruit of a corrupt process straight from the D.C. swamp.

The Heritage Foundation describes itself as "A research and educational institution whose mission is to build and promote conservative public policies." They've been lauded by Fox News host Sean Hannity as the best "supplier of innovative, conservative ideas grounded in founding principles." By the end of Trump's first year in office, the Trump administration had embraced a majority of Heritage Foundation positions. The foundation has routinely praised not just Donald Trump's Supreme Court picks, and, by its own admission, has maintained heavy influence on the president's choices to occupy the seat.

Fortunately, Senator Casey isn't the only one standing up to Trump.

House Minority Leader Nancy Pelosi (D-CA) sent out an email to supporters promising to "avenge Barack Obama if it's the last thing I do," especially when it comes to Trump's nominee. In the email, Pelosi assures that she and the Democrats have a plan to hold off the confirmation.

There's just one catch: Pelosi, being a member of the House of Representatives, doesn't have a vote in the confirmation process. That prerogative belongs to Senators.

In addition to Casey, Senator Chuck Schumer (D-NY) is rallying against Trump's pick as well. The Senate Minority Leader has warned Trump against nominating a judge willing to overturn Roe v. Wade or dismantle Obamacare, as well as insisting. Schumer even reportedly asked Trump to nominate Merrick Garland, President Obama's original choice to replace the late Justice Antonin Scalia in 2016. Republicans in the Senate refused to consider Garland and the seat eventually went to Neil Gorsuch after Trump's inauguration. The senator said it would be the "height of hypocrisy" for the Senate to not uphold the standard Republicans set in 2016 by confirming a nominee before the midterms in November.

Republicans across social media are admonishing Senate Democrats for preemptively standing against Trump's nominee despite not knowing his pick.

Easy for a Illinois Democrat to say. Oppose @realDonaldTrump nominee at all costs even though we don’t even know wh… https://t.co/EIjuiknT9o
— Sheriff Paul Babeu (@Sheriff Paul Babeu) 1531146039.0

Ironically enough, Republicans faced little opposition from within their party when they set the same precedent Democrats are abiding by now. Some are pointing that out.

@ScottforFlorida Isn't the same thing Republicans did when it was a vacancy in SCOTUS. Obama was the President and… https://t.co/Qj5ktRB8y9
— Loida Salicrup (@Loida Salicrup) 1530926720.0

The United States is gripped with uncertainty as to whom Trump will submit to the Senate tonight and whether or not there will be enough opposition in the Senate to withhold confirmation until after the midterms. The only certainty is that both parties are ready to put up a fight.