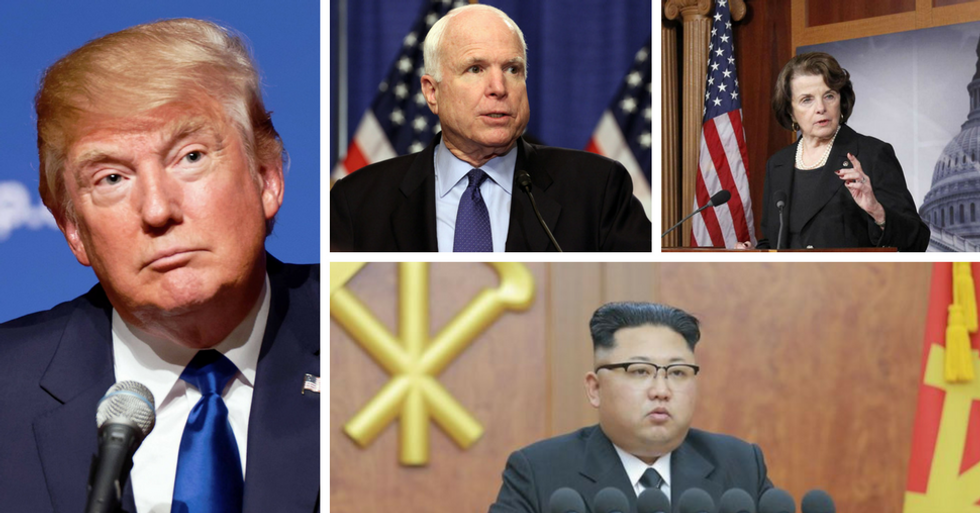 Senator John McCain (R-AZ) has joined a slew of lawmakers from both sides of the aisle who've criticized President Donald Trump after he warned there will be "fire" and "fury" if North Korea keeps threatening the United States. Trump issued his warning after a new U.S. intelligence assessment concluded that North Korea has built a nuclear warhead small enough to fit on top of a ballistic missile.

"North Korea best not make any more threats to the United States. They will be met with fire and fury like the world has never seen... he has been very threatening beyond a normal state. They will be met with fire, fury and frankly power the likes of which this world has never seen before," Trump said yesterday during a photo op at the Trump National Golf Club in Bedminster, New Jersey.

Trump's statement was not vetted through State Department channels, according to one official.

Although the president did not specify what would cross the line, hours later North Korea announced it's considering an attack on the U.S. territory of Guam, which is home to the American military's most strategic base in the Pacific. Earlier this morning, the rogue nation said it was looking beyond Guam and would hit the US mainland with preemptive strikes.

"The US should [remember], however, that once there observed a sign of action for 'preventive war' from the US, the army of the DPRK will turn the US mainland into the theater of a nuclear war before the inviolable land of the DPRK turns into the one," the country said in a KCNA report.

Senator McCain voiced his concerns in a statement to KTAR Radio:

I take exception to the President's comments because you gotta be able to do what you say you're gonna do... In other words, the old walk softly but carry a big stick, Teddy Roosevelt's saying, which I think is something that should've applied because all it's going to do is bring us closer to a serious confrontation. I think this is very, very, very serious… The great leaders I've seen don't threaten unless they're ready to act and I'm not sure President Trump is ready to act... It's the classic Trump in that he overstates things.

Senator Dan Sullivan (R-AK) asserted that the president needs Congress to approve a preemptive strike against the Hermit Kingdom.

"[I]f one of the military options that the administration is looking at is a preemptive war on the Korean peninsula launched by the United States, that would require the authorization of Congress," Sullivan said on Fox News's "The Story," adding, "Article I of the U.S. Constitution is very clear about that."

Sullivan noted that Trump would have more leeway to respond if North Korea attacks first.

"Obviously, as the commander in chief, the president can react to attacks on the country in a way that he has broader authority on that. I was mentioning the discussions of a preemptive war on the peninsula, that clearly goes in the realm of the authorization of Congress," he said.

Representative Kathleen Rice (D-NY) said that the president's remark sounded more like a statement from "the 'Supreme Leader' of North Korea than from the President of the United States."

This sounds more like a statement from the "Supreme Leader" of North Korea than from the President of the United St… https://t.co/Ot0IfGMR6z
— Kathleen Rice (@Kathleen Rice) 1502221453.0

Senator Diane Feinstein (D-CA), who previously served as a top member of the Senate Intelligence Committee, cautioned that "diplomacy is the only path forward."

Those who've played a role in crafting North Korea policy also expressed their concerns, saying that the president risks miscalculating the country's intentions.

“What I think the risk is is that the tit-for-tat rhetoric will escalate, and a small incident could explode and build into a larger conflict,” said Kelsey Davenport, director of nonproliferation policy at the Arms Control Association. “That increases the chance of war or even a nuclear exchange in the region.”

They might think he means we would strike first. That could escalate out of control. Publicly he should say very little other than we will protect and defend ourselves and our allies. In just that calm a way. Privately we should tell North Korea directly that their weapons are unusable and any attack in us or our allies will bring about the end of the North Korean state. Their only option is to not use these weapons and return to negotiations.

"President Trump's comments sound as if they were penned by Pyongyang," he said. "His statement is unhelpful and will affirm growing perceptions that the U.S. is considering a preventative military attack against North Korea."

In a joint press release, the offices of Guam Homeland Security and Civil Defense said they are working with military officials to “continue to monitor the recent events surrounding North Korean and their threatening actions.”

“As of this morning, we have not changed our stance in confidence that the U.S. Department of Defense is monitoring this situation very closely and is maintaining a condition of readiness, daily,” said George Charfauros, a Homeland Security adviser. “We will continue to keep the public updated on any changes or requests for action. For now, we advise the community to remain calm, remember that there are defenses in place for threats such as North Korea and to continue to remain prepared for all hazards.”

"My Homeland Security Advisor who is in communications with Homeland Security and Department of Defense notes that there is no change in threat level resulting from North Korea events," Calvo said. "Additionally, I have reached out to the White House this morning. An attack or threat to Guam is a threat or attack on the United States. They have said that America will be defended."