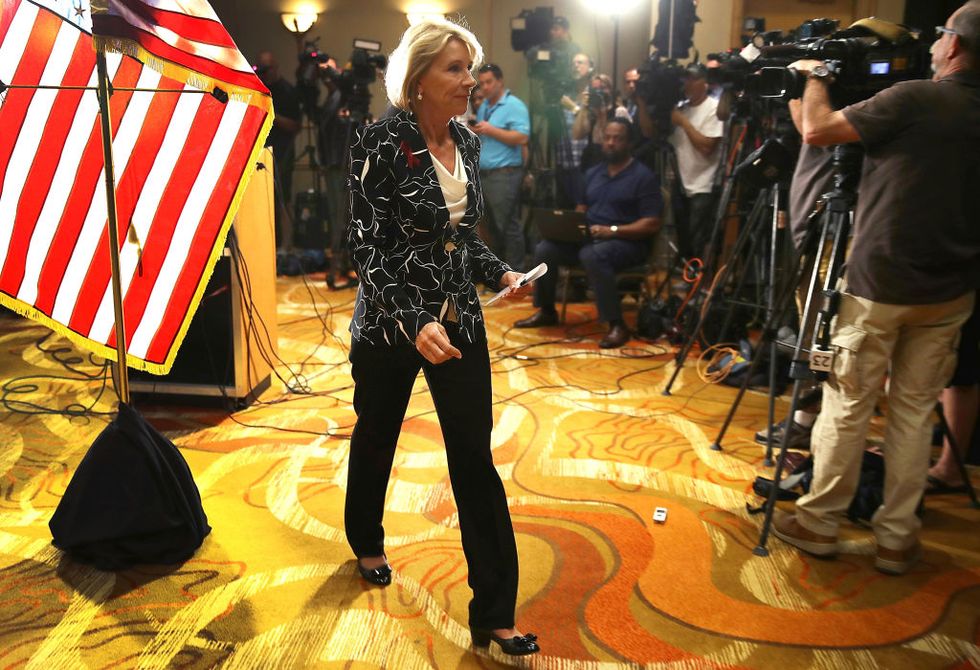 CORAL SPRINGS, FL - MARCH 07: U.S. Education Secretary Betsy DeVos exits after speaking to the news during a press conference held at the Heron Bay Marriott about her visit to Marjory Stoneman Douglas High School in Parkland on March 7, 2018 in Coral Springs, Florida. DeVos was visiting the high school following the February 14 shooting that killed 17 people. (Photo by Joe Raedle/Getty Images)

Education Secretary Betsy DeVos made an appearance earlier today at Marjory Stoneman Douglas High School, where former student Nikolas Cruz gunned down 17 students and teachers on Valentine’s Day. Survivors of the massacre criticized her defense of President Donald Trump's proposal to arm teachers. Her visit was so contentious, in fact, that she abruptly walked out of her own press conference.

"I think to say 'arming teachers' is the oversimplification and a mischaracterization really," DeVos said during the conference, which took place shortly after the visit. "I think that the concept is to, for those schools and those communities that opt to do this ... to have people who are expert in being able to defend and having lots and lots of training to do so."

When asked further questions about the president's call to arm educators, DeVos walked away from her podium and ended the press conference. DeVos had answered only a few short questions before the conference came to its abrupt conclusion.

But it's her visit to the high school itself, coming on the heels of her announcement that the Department of Education will award a $1 million grant to Broward County Public Schools as part of Project School Emergency Response to Violence, or Project SERV, which sparked protest from survivors of the shooting.

The visit was closed to the press. A high school newspaper reporter, broadcasting student, and yearbook photographer accompanied DeVos, who, along with school principal Ty Thompson. laid a wreath outside the fence of the building where the shooting occurred. The visit, according to DeVos, was designed to pose as minimal a disturbance as possible for the students on their first full day back at school since the murders.

"I was just there to be there, to be with them," DeVos said, noting that several students' "faces lit up in an amazing way" when she asked about the comfort dogs around the school.

However, history teacher Greg Pittman, who worked as Republican congressional aide in the 1980s, said DeVos didn't visit any specific classes, only meeting with a small group in the school's media center.

He continued: "Is she bringing us any other things that we need help with in education, or is it just a photo-op to send her down, appear in front of some cameras, take some pictures that she was here, pretend they care and then fly back off to Washington?"

WATCH: Greg Pittman, a teacher at #MarjoryStonemanDouglas, explains why he thinks Trump's idea to arm teachers is a… https://t.co/UdlumqRmpr
— CAP Action (@CAP Action) 1519405594.0

She didn’t come to answer questions. I feel like a lot of people have used what happened for their own personal agenda and that sort of felt like that. I’m not really sure what the purpose of her visit was because she didn’t meet formally with any teachers or students. Her being here, I don’t think is going to result in any help or change.

The student survivors also chimed in.

Alyson Sheehy, a student journalist on the newspaper staff, quoted the following DeVos tweet, in which DeVos encourages students to "Be different. Be bold. Try something unexpected. Do something new."

DeVos, she challenged, is not living up to that mantra in her capacity as Secretary of Education.

"Do something unexpected: answer our questions," she said. "You came to our school just for publicity and avoided our questions for the 90 minutes you were actually here. How about you actually do your job?"

"It was a publicity stunt, really. There was no point to it,” said Sheehy afterward. “I kind of expected that to happen, but it’s still frustrating that she made the trip out here and made it a big deal but didn’t do anything.”

She added that DeVos “didn’t meet specifically with anyone” during her visit.

“She was kind of just walking around the school and not talking to anybody,” the high school senior said. “We just kind of followed her around.”

Carly Novell, a student reporter who did not join the press pool, expressed similar sentiments.

"I thought she would at least give us her 'thoughts and prayers,' but she refused to even meet/speak with students," she wrote. "I don't understand the point of her being here."

Sarah Chadwick said "no one asked" for DeVos to visit.

I did, actually. @BetsyDeVosED @BetsyDeVos is an American patriot and is the Sec. of EDUCATION which means she is a… https://t.co/qYmHwuxdDr
— Kyle Kashuv (@Kyle Kashuv) 1520404649.0

A review of messages sent out by other students indicates he is in the minority, however.

Emma Gonzalez, who shot to international attention for calling "BS" during a spirited speech in which she slammed legislators for their failure to pass meaningful gun control measures, responded to news of DeVos's visit with, "Good thing I was already planning on sleeping in tomorrow."

"Betsy Devos came to my school, talked to three people, and pet a dog. This is incase [sic] the press tires to say something else later," tweeted one student named Alanna.

Another student named Kyra said DeVos "did not properly answer my only question."

Secretary of education Betsy Devos spoke to me and only a hand full of students. She did not properly answer my onl… https://t.co/O2KEl5Z1um
— Kyra Parrow (@Kyra Parrow) 1520452153.0

Even Andrew Gillum, the mayor of Tallahassee, where students rallied last month, weighed in on the controversial visit.

"Next time she should try actually listening to our students," he said.

Next time she should try actually listening to our students. https://t.co/qoorPBgEu3
— Andrew Gillum (@Andrew Gillum) 1520443150.0

In a statement, U.S. Department of Education spokeswoman Liz Hill said DeVos’ visit was “designed to lend support to the community during a difficult time, but also to minimize disruption on students’ first full day back at school.”

The Secretary has said the students of MSD have shown tremendous strength and that their voice are extremely important as we work to find solutions to keep students safe. She had some conversations with students today, but wants to sit down with more students from MSD in the near future.

They’re obviously very, very interested in seeing what adults are going to do about this whole situation and what we’re going to do to find common ground and common solutions to carry forward. I told them that I am very interested in hearing from them... I told the student newspaper reporters that I would love to come back sometime, in an appropriate amount of time, and just sit down and talk to them. We are committed not only to listening but to action."

To those particular statements, Alyson Sheehy responded: “We would welcome it, but if she pulls the same thing she did today, we’re not going to take it.”