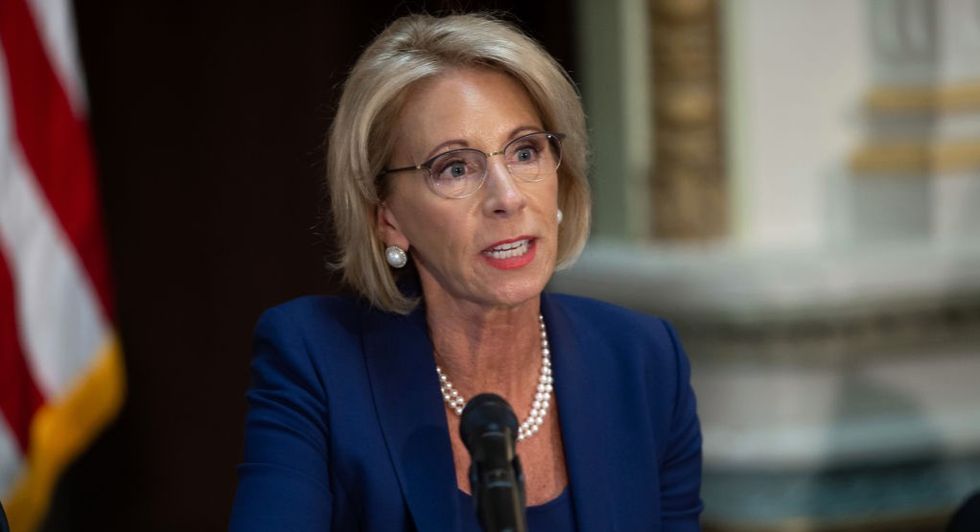 US Secretary of Education Betsy DeVos speaks during the fifth meeting of the Federal Commission on School Safety in the Eisenhower Executive Office Building, adjacent to the White House in Washington, DC, August 16, 2018. (Photo by SAUL LOEB/AFP/Getty Images)

Education Secretary Betsy DeVos got taken to task by a U.S. Magistrate Judge for violating a court order imposed by the same judge in a 2018 ruling.

It turns out DeVos and the Education Department violated that order no fewer than 16,000 times, according to a briefing filed by the Department.

Judge Kim wasn't at all happy about it:

"At best it is gross negligence, at worst it's an intentional flouting of my order..."I'm not sure if this is contempt or sanctions. I'm not sending anyone to jail yet but it's good to know I have that ability."

Corinthian Colleges went defunct toward the end of the Obama administration after numerous lawsuits and accusations of fraud and deceit. At the time, the federal government sided with the shuttered colleges' students, ruling that hundreds of thousands of them were entitled to loan forgiveness.

But in President Donald Trump's inaugural year of 2017, DeVos's Education Department began ignoring hundreds of thousands of loan forgiveness applications from Corinthian Colleges, resulting in a class-action lawsuit against the department.

Not only was the department still going after loan payments, but only 10 loans out of the 300,000 eligible for forgiveness had actually been forgiven.

As a result, many people felt Judge Kim should "lock her up."

People were shocked at the greed.

Remember how billionaire Betsy DeVos chose to go through a grueling public humiliation just for the opportunity to… https://t.co/NrqTqEcmn9
— Andrea Junker (@Andrea Junker) 1570545338.0

@washingtonpost Is there anyone in this administration who abides by the law for a change?
— Hassan (@Hassan) 1570215762.0

The DeVos family is worth about $5.4 billion.