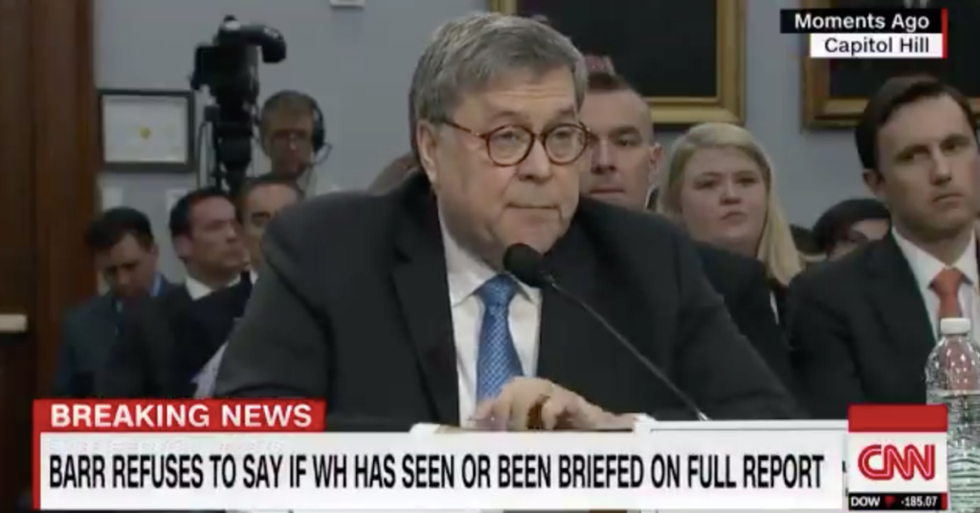 Attorney General William Barr confirmed today in a Congressional hearing that he will deliver the Mueller report to Congress and the public within a week, reiterating his earlier promise to release the report by mid-April. But he declined to say whether he'd shown the White House the report.

“I’ve said what I’m going to say about the report today,” he said. “I’ve issued three letters about it..." he said. "But I’ve already laid out the process that is going forward to release these reports hopefully within a week. I’m not going to say anything more about it until the report is out and everyone has a chance to look at it.”

Attorney General William Barr declines to answer whether the White House has seen or been briefed on the Mueller re… https://t.co/JvIHHdXb8Z
— CNN (@CNN) 1554820440.0

People think they know why.

Does Barr refusal to answer whether he briefed White House on the Mueller report mean that... he did? No is a prett… https://t.co/za0Hvzoiti
— Susan Glasser (@Susan Glasser) 1554818781.0

Barr won't comment if White House has seen the full report, which means it has and explains why Trump is attackin' Mueller's team again.
— Tea Pain (@Tea Pain) 1554819140.0

Other Democrats on the House Appropriations Committee eagerly pressed Barr about the report.

“The American people have been left with many unanswered questions; serious concerns about the process by which you formulated your letter; and uncertainty about when we can expect to see the full report,” said Representative Jose Serrano (NY).

“I think it would strike a serious blow to our system and yes to our democracy if that report is not fully seen,” he added.

Speaking to reporters afterward, Representative Lowey said it's "very hard" to believe Barr did not show the Mueller report to the White House––and make any changes or additions based on their recommendations.

“This is what drives the public crazy, when they see something like this,” Case said. “This is what we have to try to avoid.”

“I appreciate the importance of releasing as much of the information in the report as I can consistent with the law," Barr replied.

Barr did respond to questions about his limited summary of the Mueller report when asked about the reported frustrations from members of the special counsel's team.

"I suspect that they probably wanted more put out. But, in my view I was not interested in putting out summaries or trying to summarize because I think any summary, regardless of who prepares it, not only runs the risk of being under inclusive or over inclusive but also would trigger a lot of discussion and analysis that really should wait everything coming out at once."

President Trump has continued to assail Democrats as they wait for the report's release, saying that they'll "never be satisfied, no matter what they get, how much they get, or how many pages they get."

The president's actions are a stark about-face from comments he made the day after the special counsel’s conclusions were released. Asked about Mueller's report then, Trump said Mueller had acted honorably.