New Congresswoman Got Reprimanded for Savaging Donald Trump From the Floor of the House, But She Has No F***s to Give 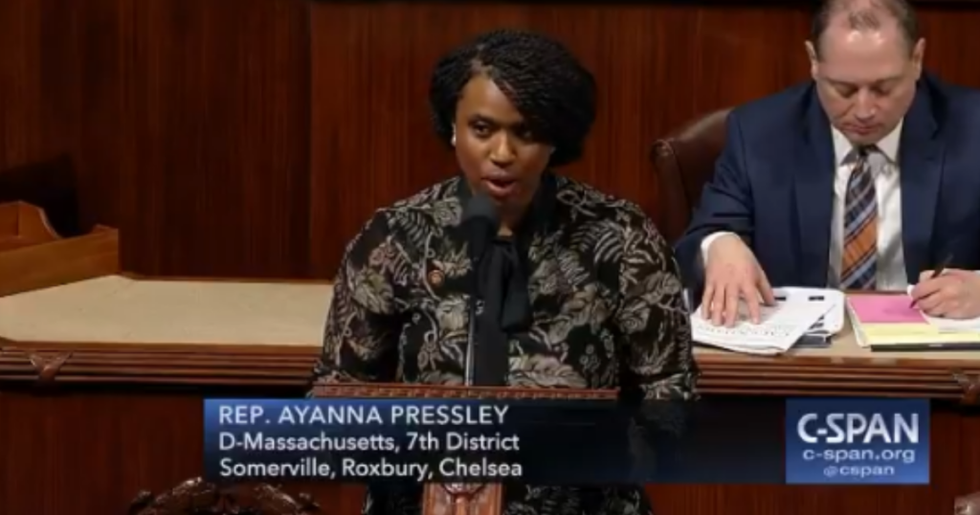 Freshman Congresswoman Ayanna Pressley (D-MA) on Tuesday tore into President Donald Trump's reckless disregard for human well-being in a fiery speech on the floor of the House of Representatives.

"I rise today in opposition to the occupant of the White House," Pressley said. "Mr. Trump, you took an oath just as I did five days ago to protect and defend the Constitution and the American people."

Pressley drove a stake through Trump:

"You devalue the life of the immigrant, the worker, and the survivor. I see right through you and so do the American people."

Pressley then assailed the president over the ongoing government shutdown - the third of his presidency - now on its 20th day with no end in sight.

"This has nothing to do with border security. Your shutdown, another Trump-generated crisis, brought a tsunami of hurt to the American people. So today I rise to lift the voices of the unheard. I rise today on behalf of the families concerned about feeding their children because their WIC benefits will run dry. I rise today in solidarity with the thousands of workers with calloused hands and broken spirits working for no pay. I rise today in support of the survivor fleeing violent hands, seeking safety only to find the shelter door locked because of your shutdown. I rise today in support of the American people who believe in the promise of this nation and ask for honest pay for an honest day's work. Today I rise as one and I stand as thousands."

Upon finishing her speech, Pressley was "reminded" that members are to "refrain from engaging in personalities toward the president."

Undeterred, Pressley turned to Twitter to trumpet her opposition to Trump and his holding the government and the American people hostage.

"Mr. Trump," wrote Pressley, "I see right through you and so do the American people."

@AyannaPressley 40% of American people don't see the truth about @RealDonaldTrump. WAKE UP PEOPLE!!! 🚨BAD LEADERSHIP CAN NOT BE IGNORED!!!🚨
— Demetrius Gibson (@Demetrius Gibson) 1547004309.0

Backing down is not an option.

@purduewilly @cspan @RepPressley Ridding the planet of the Trump presidency is the number one thing they can do to help the American people.
— Jae Gregory (@Jae Gregory) 1547007715.0

Welcome to The Resistance, Donald.