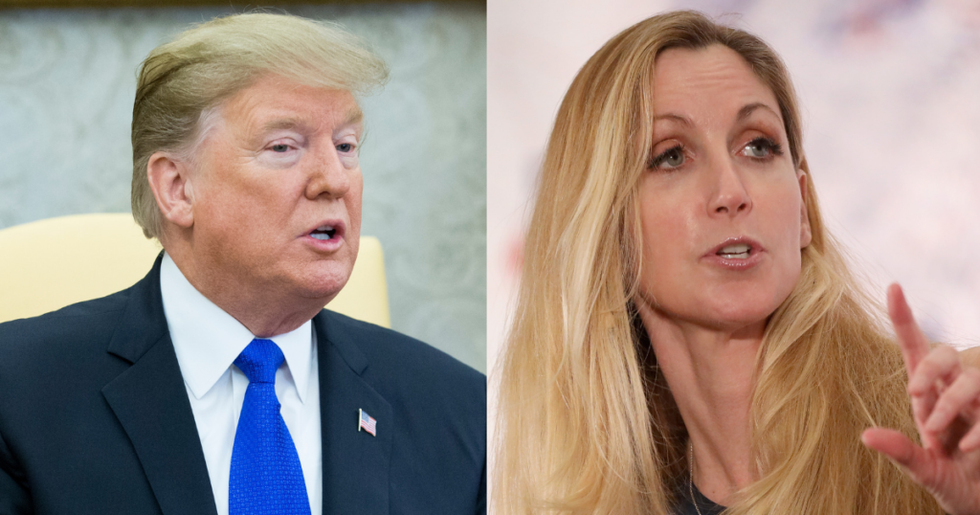 Senate Majority Leader Mitch McConnell (R-KY) announced on Thursday that President Donald Trump will sign a bipartisan spending bill to prevent another shutdown while also declaring a national emergency in a last-ditch effort to erect a wall at the southern border.

McConnell reportedly urged the president not to invoke his emergency powers but is standing by him anyway.

“President Trump will sign the government funding bill, and as he has stated before, he will also take other executive action - including a national emergency - to ensure we stop the national security and humanitarian crisis at the border,” the statement read. "The president is once again delivering on his promise to build the wall, protect the border, and secure our great country."

When the news of Trump's plans reached right-wing pundit Ann Coulter, she took to Twitter to express her frustration, assailing her fellow Republicans for "selling out our constituents."

"GOP motto: NEXT TIME!," Coulter thrashed on Twitter. "We're selling out our constituents this time -- but we'll get to our promises NEXT TIME. We thought Trump was different."

"NATIONAL EMERGENCY WON'T HELP," Coulter exclaimed a few minutes later. "IT'S OVER IF HE SIGNS THIS BILL!"

Coulter flushed her loyalty to Trump late last year over his failure to fulfill his campaign promise of building a Mexico-funded border wall.

Ironically though, Coulter may be onto something, as Democrats in the Senate have vowed to challenge the emergency declaration.

"There is word the president will declare a national emergency. I hope he won't. That would be a very wrong thing to do," Schumer said, adding that he and House Speaker Nancy Pelosi (D-CA) will give a formal response "in short order."

Pelosi said Democrats are “reviewing our options” and knocked Trump for "doing an end run around Congress."

Pelosi added that if Trump were serious about national emergencies, he would tackle gun violence instead of a fabricated immigration crisis.

The White House is preparing for a fight.

"We're very prepared, but there shouldn't be" any hiccups, Sanders told reporters. "The president's doing his job. Congress should do theirs."

The 1,159-page omnibus spending package will fund the government through September and contains seven provisions for $1.375 billion in funding for 55 miles of border barriers, a far cry from the $5.7 billion Trump has demanded. The Senate passed the measure 83-16 and the House is expected to pass it as well.

The rest of the funding, White House Chief of Staff Mick Mulvaney has said, will be obtained using Trump's transfer authority.

"We'll take as much money as you can give us and then we'll go off and find the money someplace else, legally, in order to secure that Southern [border] but this is going to get built with or without Congress," Mulvaney said Sunday on Fox News Sunday. "The whole pot is well north of $5.7 billion," he added.

The emergency declaration must survive a resolution of disapproval in both the House and Senate, similar to when Representative Steve King (R-IA) was condemned for racist rhetoric last month.

A two-thirds majority in the House is required for such a measure to pass. Senate Majority Leader Chuck Schumer (D-NY) can bring the measure to a vote anytime, however, McConnell believes he can whip the 34 votes necessary in the Senate to sustain a presidential veto, which would uphold the emergency declaration.

"I think there are different opinions about it, and if he goes that route, we'll just hash it out," McConnell said last week. "The president could win anyway by vetoing the bill and then trying to get enough votes to sustain it, so [he] may ultimately be able to prevail on the national emergency alternative."