Roger Stone Literally Begged for Mercy at His Court Hearing Today, and the Judge Just Made Her Ruling 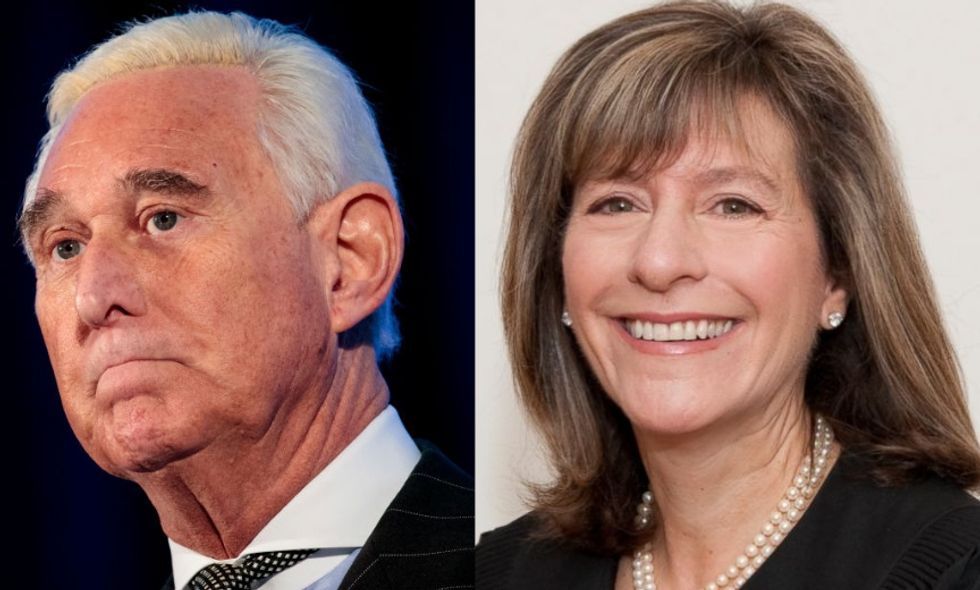 After Trump associate Roger Stone was indicted for witness tampering and multiple counts of making false statements as a result of Special Counsel Robert Mueller's investigation, he furiously proclaimed his innocence in multiple media appearances, decrying the investigation and the Judge presiding over his case: Judge Amy Berman Jackson.

Stone set the internet ablaze earlier this week, when he posted an Instagram picture of Berman Jackson next to gun crosshairs. He continued his attempts to discredit the Judge in his caption:

“Through legal trickery Deep State hitman Robert Mueller has guaranteed that my upcoming show trial is before Judge Amy Berman Jackson , an Obama appointed Judge who dismissed the Benghazi charges again Hillary Clinton and incarcerated Paul Manafort prior to his conviction for any crime .”

Berman Jackson responded by ordering Stone to court to explain the photo and defend himself against the possibility of the case's partial gag order being expanded. It didn't go well.

Stone, known for being irreverent and unapologetic, was completely submissive. When pressed by Berman Jackson on his reasons for posting the photo, he reiterated multiple times that it was an "egregious, stupid mistake."

By the end, he was begging her for lenience:

“I’ve been treated for emotional stress. I can only beseech you to give me a second chance. Forgive me the trespass.”

Stone also assured that he was "kicking [him]self over [his] own stupidity."

But Berman Jackson wasn't having it—no matter how many times Stone apologized.

"Thank you, but the apology rings quite hollow."

She expanded Stone's gag order to forbid him from publicly discussing the case and those involved with it. He's also forbidden from instructing other figures to discuss it publicly. The initial gag order only forbade Stone from discussing the case in the vicinity of the D.C. courthouse. Now, he will only be able to ask for help funding his defense and assure of his innocence.

While some were hoping the Judge would revoke Stone's bail, sending him to prison until his trial later this year, hearing Stone beg did not disappoint.

I wonder how all the alt right tough guys are handling watching an alpha like Roger Stone beg for forgiveness and declare his own stupidity.
— Adam Parkhomenko (@Adam Parkhomenko) 1550780715.0

@realDonaldTrump @JussieSmollett I HOPE & PRAY you are listening to your bestie Roger Stone BEG for his freedom rig… https://t.co/Zaxug05qrM
— PuffPuff (@PuffPuff) 1550779699.0

But the begging was only one part of a hearing that was nothing short of absolutely bonkers.

Berman Jackson noted the changes in Stone's story. He went from claiming that a staffer likely posted the photo to saying that he didn't recognize the crosshairs, insisting he believed them to be a "Celtic symbol."

When you're explaining to a federal judge why you used a Celtic occult symbol, rather than crosshairs, in you Insta… https://t.co/brDm0LhHR9
— Blake News (@Blake News) 1550779390.0

Stone said he did not recognize the image at first and when he examined it later and researched it he said it was a… https://t.co/SRdMLTswF5
— Shimon Prokupecz (@Shimon Prokupecz) 1550778999.0

What's more, Stone's assertion that he didn't know what the crosshairs meant was disproven before the hearing was even over.

To Roger Stone's claim that he did not recognize the image and believed it to be a Celtic symbol, here is another i… https://t.co/SwUNHvUWNp
— Kyle Griffin (@Kyle Griffin) 1550781016.0

While he may have escaped detainment today, many think the vocal Stone doesn't stand a chance at keeping quiet.

Berman Jackson was clear that a breach of the gag order would result in his detainment:

"Today, I gave you a second chance. This is not baseball, you don't get a third chance."

Only time will tell if Stone's freedom means more to him than his well-documented propensity for pot-stirring.