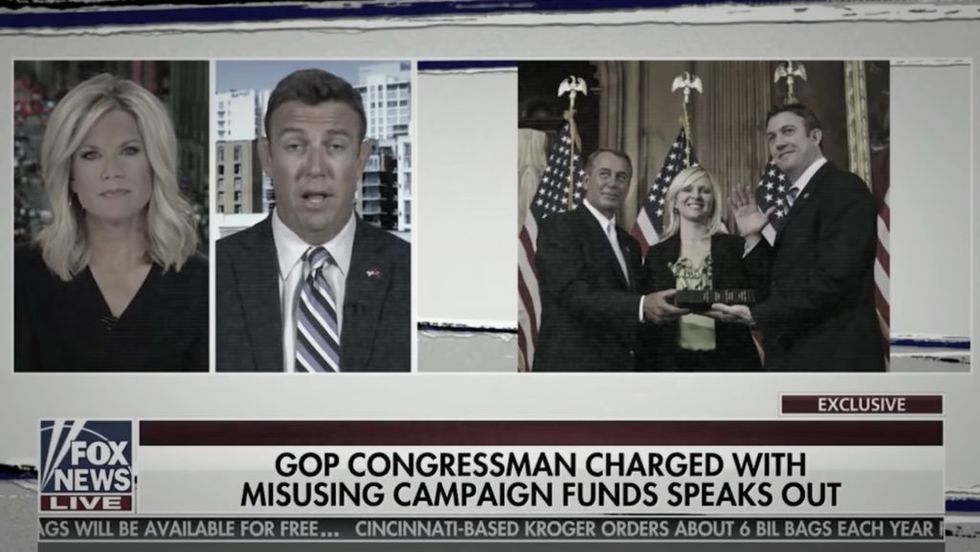 "Now is the time to put country over party and give someone new a chance," the ad says.

Campa-Najjar's ad is a 30-second spliced-together clip of Fox News hosts blasting Hunter for his defense of the charges, specifically when he blamed his wife. Hunter scapegoated her by saying "she handled the finances" and that whatever wrongdoing occurred, she is equally responsible.

“Indicted Congressman Duncan Hunter is paying for ads to what should be his base—Fox News—to defend his embarrassing, criminal actions,” Campa-Najjar tweeted on Thursday. “So we’re airing this ad on Fox News & letting their anchors do the talking for us.”

Indicted congressman Duncan Hunter is paying for ads to what should be his base - @FoxNews - to defend his embarras… https://t.co/OUVMQhfRIw
— Ammar Campa-Najjar (@Ammar Campa-Najjar) 1537455399.0

Campa-Najjar's supporters love the ad. It's simple, effective, and uses Hunter's own words against him.

Campa-Najjar doubled down on his strategy by pointing out the disciplinary actions Hunter has faced in Congress resulting from the criminal charges.

"We intend to run a campaign that is fair, honest and transparent," Najjar said in a statement. "I think it speaks volumes that Speaker Ryan stripped Hunter of his committee assignments and I have faith that the voters in my district want a lawmaker, not a lawbreaker as their representative. Integrity and responsibility isn't a Republican issue or Democratic issue - it's an American issue and I am ready to put country over party."

Hunter was removed from his position on U.S. House committees and is facing calls for resignation from House Minority Leader Nancy Pelosi (D-CA), who said Hunter represents a “rampant culture of corruption” inside Republican circles. Hunter should resign to “affirm that no one is above the law,” Pelosi said.

A representative for Campa-Najjar's campaign said the ad is specifically targeting San Diego, the heart of California's 50th Congressional district, which Hunter has represented since 2013.

"A spokesperson for the campaign told The Daily Beast that the ad will run for two weeks exclusively on Fox News in the San Diego designated market area," The Daily Beast wrote on Friday.

The Campa-Najjar campaign released another ad on Friday with a "betrayal" theme, again focusing on Hunter's willingness to let his wife take the fall for crimes they are both accused of committing.

The conservative California congressman and his wife stand accused of using more than $250,000 worth of campaign funds for personal purposes between 2009 and 2016.

The 47-page indictment includes counts of conspiracy, wire fraud, falsification of records, prohibited use of campaign funds, and aiding and abetting.

The Hunters “had less than $1,000 in reportable assets for each of the years 2009-2016,” the indictment says, offering a possible motivator for their illegal activity.

“The funds were allegedly used for family vacations to locations such as Hawaii and Italy, as well as more mundane expenses such as dental work and school tuition,” CBS reported in August. “The Justice Department also alleges that the Hunters used tens of thousands of dollars for smaller expenses such as fast food and video games.”