Healthcare Coverage Could Be Eliminated for Millions--Except Congress 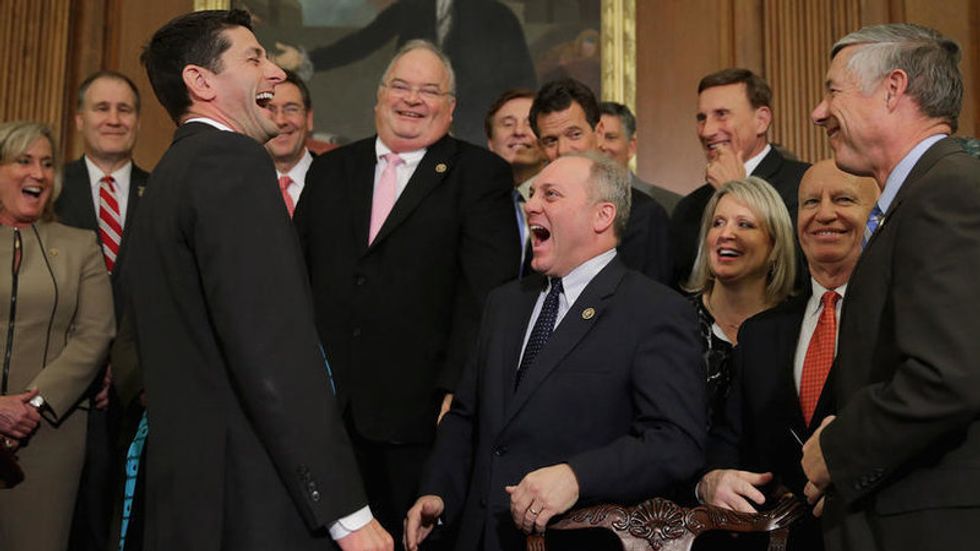 Trumpcare has returned, and now has the backing of the House Freedom Caucus thanks to a new amendment to the bill. That amendment includes language that would allow members of Congress and their staff to keep benefits that the American Health Care Act will eliminate for ordinary citizens.

The amendment was designed to allow states to create plans that do not include popular coverage for items such as preexisting conditions, maternity care, prescription drugs, and mental health. If states apply for a waiver it is automatically granted, making it easier to change benefits.

However, any waivers that are applied to state coverage would not apply to Congress. Under Obamacare, members of Congress and their staff generally purchase health insurance through the exchanges established in the Affordable Care Act.

The amendment was proposed by Congressman Tom MacArthur after negotiations with the Freedom Caucus. After Vox broke the story about the congressional exemption, MacArthur issued a statement declaring his intent to close the loophole.

Congressman MacArthur does not believe Members of Congress or their staff should receive special treatment and is working with House Leadership to make absolutely clear that Members of Congress and staff are subject to the same rules, provisions, and protections as all other Americans.

of the Senate Budget Committee. Senate Republicans disagree. “We did not write it, did not draft it, and did not add it,” an aide who works for the committee told Vox.

House Minority Leader Nancy Pelosi had harsh words for the exemption: "The monstrous immorality of Trumpcare is perfectly encapsulated in House Republicans’ plan to exempt their own health coverage from the damage it will do to everyone else."

Once again, Republicans are pushing to pass the bill quickly. This time, the White House wants the bill passed by Saturday, President Donald Trump's 100th day in office. Even with Freedom Caucus on board, they may have trouble summoning the necessary votes. Polls show that Americans do not support a continued focus on healthcare and are generally opposed to the new GOP plan.

Moderate Republicans may not sign on, especially with the possibility of people losing coverage. “I have always campaigned on making sure that no one is denied coverage based on pre-existing condition,” Representative Leonard Lance told The Washington Post when explaining his opposition to the bill.

That also makes it less likely that the bill would pass the Senate. “It will be harder for the Senate to get 51 Republicans,” Republican Senator Roy Blunt told Bloomburg.