America benefits from China’s economic free-fall – until it doesn’t. Then it gets ugly. 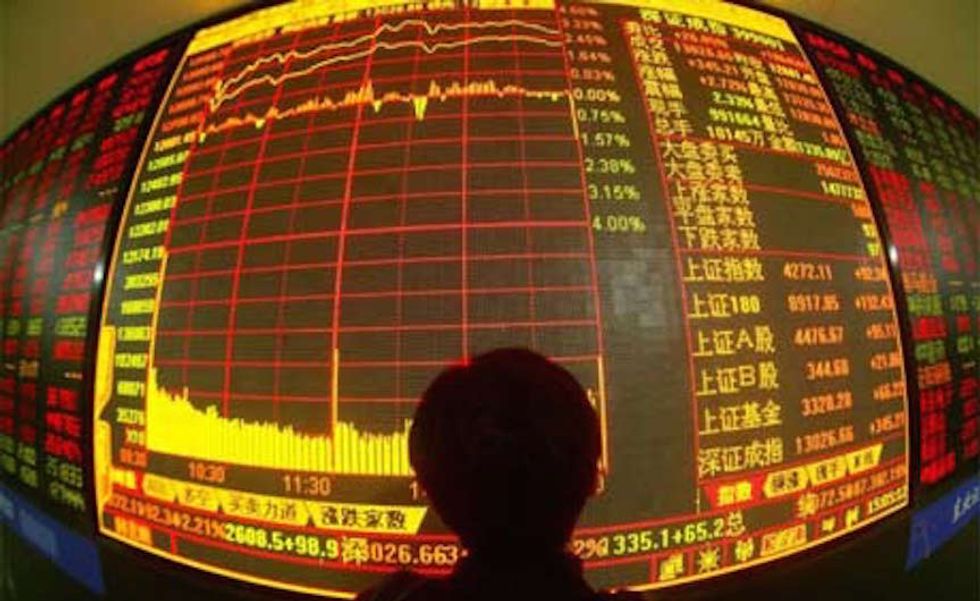 How bad is China’s economy? If only we knew.

The closed and secretive nature of the Chinese government, and its tight control over markets, makes diagnosing the Chinese economy a lot like diagnosing a friend’s medical condition using Wikipedia. Bloomberg News recently threw up its hands and declared that, in the absence of clear and dependable measures, there are six different ways you can look at China’s economy, so take your pick.

But while exact details may be fuzzy, the big picture is clear: in each of those six approaches, China is underperforming even recently downgraded economic forecasts, but the news may not be all that bad for the U.S.

China is bleeding money. More than $500 billion vanished from its economy in the first two quarters of 2015 – the equivalent of the economies of entire small nations just disappearing off the world’s stage.

China’s economy is stumbling – sometimes perilously so – and for all that the Chinese government insists to the contrary, global markets are feeling the pressure as the depths of China’s problems become apparent.

When one of the world’s two largest economies stumbles, what happens to the other? As China falters, markets look to the U.S. to see whether we prosper, or if China will pull us down, too.

China’s economic slowdown will most impact those nations where it has heavily invested – and that means much of the developed world. China has substantial investments in Africa, the Pacific Rim and South America, and those have already taken a hit. In the first half of the year, Chinese investment in Africa plunged an astonishing 84%. Skittish markets in the

developing world typically lead investors to seek security in the U.S. dollar, keeping foreign investment in U.S. Treasury bills and dollar-backed assets strong. USA Today reports that the world is now in “an investor stampede” out of developing markets and into dollar-backed assets. China’s pullback could be the cause.

There’s even reason to believe direct Chinese investment in U.S. assets is on the rise. China may be the world’s largest economy by some measures, but the world still considers America’s the most secure. When China’s economy gets sick, the world – including China – pays America to play nurse.

This, of course, also strengthens the American dollar, and a strong dollar means cheaper imports and consumer goods. Everything from Mexican produce to – yes – Chinese manufactured computer parts may be affected.

Too Much of a Good Thing

As the dollar gets stronger and direct investment in the U.S. increases, China’s slowdown also has a third, even more significant benefit for the United States.  Much of China’s trade with the developing world is in raw materials – oil, gas, copper, iron ore, and the like – prices for which have seen a significant boost in recent years as a result of demand from

China. The more Chinese activity slows down, the less demand there is for the raw materials that are vital to American activity: low gas prices, for example, leave more money in everybody’s pockets.

Many of these factors reinforce each other: cheaper commodities combined with a strong dollar together mean even cheaper imports, while investment in America continues as a result of the dollar’s strength against foreign currencies weakened by China’s slide.

The problem with these reinforcing trends is that if they go on too long, these easy tradewinds could grow into a typhoon taking everybody down.

The U.S. and China are locked in a perpetual currency game, each insisting that the other allow its currency to strengthen in the global marketplace. China is desperate for the U.S. not to raise interest rates, which would reduce its easy access to dollars, but the U.S. is equally insistent that China let its currency rise – even if this weakens U.S. purchasing power and thus raises inflation for goods made in China.

Both countries are ultimately more concerned with jobs than with purchasing power. Sure, it’s great to have cheap consumer goods, but not at the cost of the jobs we need to buy them. A significant drop in the value of China’s currency gives Chinese manufacturers a

serious competitive advantage precisely because their goods are so cheap. That means more jobs for Chinese workers rather than American.

A slightly deflated Chinese currency could be absorbed by the advantages of enhanced foreign investing and reduced commodity prices, but a significant currency drop, which China has every motive to allow, would potentially cost American workers plenty.

A Chinese currency free-fall would be even worse. Remember all those other countries enjoying the benefits of China’s investment? If China’s economy collapses, so do theirs. At that point America’s economy is threatened, because America’s customers are gone, and the rest of the world’s labor force becomes willing to do the work for far less.

The good news is that China is even more eager than anyone to keep all this from happening. While the average American worker might suffer from a downturn in China’s economy, this poses no existential threat to the American government. But the Chinese Communist Party can’t take such chances. As an unelected government, its legitimacy rests on providing prosperity for its people. No prosperity means the threat of another Chinese revolution.

That’s why the Chinese government has taken unprecedented steps to prop up its economy against its own weakness in the short term – cutting benchmark interest rates, pumping government money into the stock market (while often forbidding ordinary citizens to sell) and selling hundreds of billions in its foreign reserves. China has even reversed

its long-standing “one child policy,” allowing most couples to now have two children, which China hopes will boost consumer spending in the short term and provide lower labor costs in the long run.

China has even set up a plan – albeit a vague one – to double the size of its economy by 2020. This is great news if they can do it, but the details are scarce and, so far, the markets aren’t buying it. But a lot can happen in five years.

“A lot” includes the Trans-Pacific Partnership (TPP), a proposed trade agreement between 12 Pacific Rim countries - including the United States but not China. If approved, it would be the largest trade agreement in 20 years. The trillion dollar question right now is: would the TPP insulate the U.S. from China, or would it make us even more interdependent?

The answer to both questions answer is “Yes.”

Greater economic connection with Pacific countries will make the U.S. more sensitive to conditions in China. Strengthening economic ties with those countries, however, will make them less vulnerable to China’s influences. This doesn’t mean the world’s economy could withstand a catastrophic Chinese meltdown, but it does make such a meltdown less likely.

Just as importantly, it could lead partner countries to economic reforms. Some analyses suggest that the big winner in the TPP will be America’s relationship with Japan – China’s main competitor for influence in Asia. The TPP will not only enhance trade between the U.S. and Japan, it makes the prospects of economic reforms within Japan more likely, thus spurring greater economic dynamism, while providing an additional firewall against a Chinese meltdown.

If China wants in on the TPP, it needs to commit to significant economic reforms of its own. Perhaps the biggest question is whether it has the capacity to do that. China’s economy is ultimately driven by politics and not laws--the result of rampant corruption in its government and the source of the weakness now gripping its economic output. China is now the world’s largest market, but outsiders are loath to invest in a rigged system– and for that matter, so are insiders. There’s a reason that even Chinese officials are eager to put their money in the U.S. when crisis strikes.

China’s economy will continue to wobble so long as it is governed by political necessity rather than law. While the U.S. is likely the most resilient country in the world against a Chinese economic contagion--and might even benefit in the short term--it is now clear the two countries share a common economic heartbeat.