National Wreaths Across America Day: The History of the Holiday 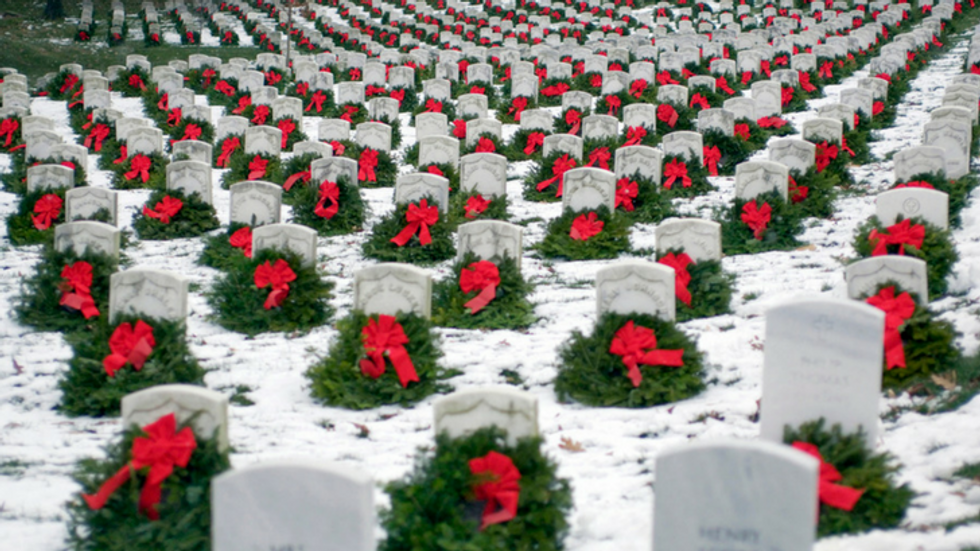 On the third Saturday of every December, Wreaths Across America bands together with volunteers to lay wreaths on the graves of United States’ veterans across the nation. The organization’s aim is to promote the remembrance of the fallen, the honor of those that currently serve, and the education of the cost of freedom.

Wreaths Across America wasn’t always a widespread effort, however. Though hundreds of volunteers participate in the wreath laying at Arlington Cemetery in Virginia today, its beginnings were much humbler and started with a man named Morrill Worcester.

According to Wreaths Across America's official website, the roots of the holiday began when 12-year-old Morrill Worcester, future owner of Worcester Wreath Company, visited Arlington National Cemetery. The experience stuck with him, “reminding him that his good fortune was [due to] the values of [the] nation and the veterans who made the ultimate sacrifice for their country.”

After founding the Worcester Wreath Company, Morrill found himself with a surplus of wreaths during the 1992 holiday season. With the memory of Arlington still with him, Morrill, with the assistance of Maine Senator Olympia Snowe, planned to turn his extra 5,000 wreaths into arrangements to be placed on the graves in an older section of Arlington.

As word of Worcester’s plan reached the ears of local businesses, volunteers from the local American Legion, VFW Posts, and the Maine State Society of Washington, D.C. started to get involved.

A Tradition is Born

For 13 years, Worcester kept the tribute going without much recognition. Every year, he and a band of volunteers adorned Arlington’s stones with wreaths. In 2005, a picture of Worcester’s efforts circulated the internet, garnering national attention. Before long, requests were filtering in from cities across the U.S. wanting to mirror the wreath-laying at Arlington.

Though he couldn’t fulfill the thousands of requests to donate wreaths to every state, Worcester started providing seven to each state for each branch of the military and the POW/MIAs. The following year, 150 wreath-laying ceremonies were held to honor veterans and members of the Armed Forces. Within the following year, Worcester and those that helped lay wreaths at Arlington formed the Wreaths Across America non-profit.

In 2008, as participation in the tradition grew to more than 300 cemeteries across the nation, Congress voted Dec. 13, 2008 as the first “Wreaths Across America Day.” For the 2017 commemoration, Wreaths Across America chose the theme “I’m an American. Yes, I am,” based on a song written by Maine singer-songwriter Rick Charette.

To find a ceremony in a specific city, use the website’s “Search Locations” option. Donations to Wreaths Across America are divided where $0.86 of every dollar goes toward sponsoring and shipping wreaths across the country.