This Week Just Got a Lot Worse for Kellyanne Conway 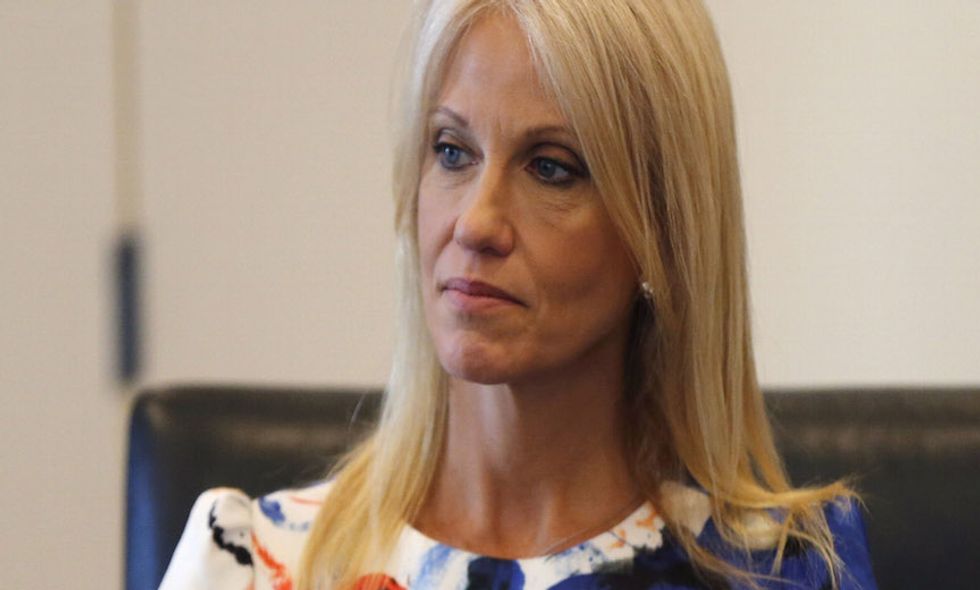 Things aren't going well for Trump's inner circle this week. The latest problems are for senior adviser Kellyanne Conway. The Office of Government Ethics has called for a White House investigation and disciplinary action arising out of her public comments that appeared to commercially endorse Ivanka Trump's clothing line. And to add to her woes, Conway is now under fire for sharing Valentine's greetings from a white supremacist's Twitter account.

Last week, Conway went on national television to encourage Americans to buy Ivanka Trump's product lines after they were pulled from Nordstrom. A regulation from the Office of Government Ethics bans federal employees from endorsing products or companies and prohibits the use of public office for the personal gain of oneself or friends and relatives.

Lawyers for the White House and OGE apparently spoke on Feb. 9 — the day of Conway’s interview — and that the Republican and Democratic leaders of the House Oversight Committee asked the Office of Government Ethics to follow up.

The Office of Government Ethics has no Congressional authority, however, to conduct investigations. In response to a letter from the Democrats on the House Committee on Oversight and Government Reform, the OGE outlined their planned response to Conway's actions:

"When OGE has reason to believe that an employee may have violated the Standards of Ethical Conduct for Employees of the Executive Branch (Standards of Conduct), the law authorizes OGE to make only an informal recommendation that the employing agency investigate the matter and consider taking disciplinary action against the employee."

The OGE deals with a number of ethics inquiries each year. Their most recent records, from 2015, detailed 1584 violations of the Standards of Conduct. Promoting products and services for the benefit of themselves, family or friends, as Conway did,  was the most common violation. Most of those violations resulted in a warning or suspension, particularly for first offenses.

White House spokesman Sean Spicer said last week that Conway has been ‘‘counseled,’’ but the OGE said it has yet to receive any guidance on what if anything happened as a corrective action. The OGE is requesting that White House lawyers tell them in writing by Feb. 28 what they’ve done about the matter.

Conway’s “counseling” could be considered a sufficient disciplinary response, due to the vague nature of the rules. Since the Standards of Conduct are rules and not law, there is no requirement for the Trump administration to take further action.

Twitter Woes
Adding to her objectively disastrous week is a furor over Conway's messages and retweets of a Twitter account run by White Nationalists.  Conway gave a Valentine’s Day shout out to a  Twitter user "Lib Hypocrisy" which on Tuesday had commented favorably on one of Conway tweets.
Conway had appeared on NBC’s “Today” show earlier answering questions about the resignation of  Michael Flynn. After host Matt Lauer told her she was making “no sense", Conway later went on twitter to proclaim that “serves at the pleasure” of President Donald Trump and that “his message is my message.”

Lib Hypocrisy, in reply, praised Conway for her “strength & resiliency in face of vile hatred, bigotry, & sexism of the unhinged Left.” “Love you!” Lib Hypocrisy wrote, to which Conway wrote, “Love you back,” retweeting the Lib Hypocrisy tweet while wishing her “hapless haters” a happy Valentine’s Day.

When it was later pointed out that the account was run by White Nationalists, (Lib Hypocrisy’s handle features the infamous green icon Pepe the Frog, a symbol of the white nationalist movement, and the account bio features hashtags #WhiteIdentity, #Nationalist), Conway promptly deleted the message.
But Conway later added further controversy, implying that she herself had not sent the message and now claims she does not know who had access to her account.

“Everybody makes mistakes,” she said.