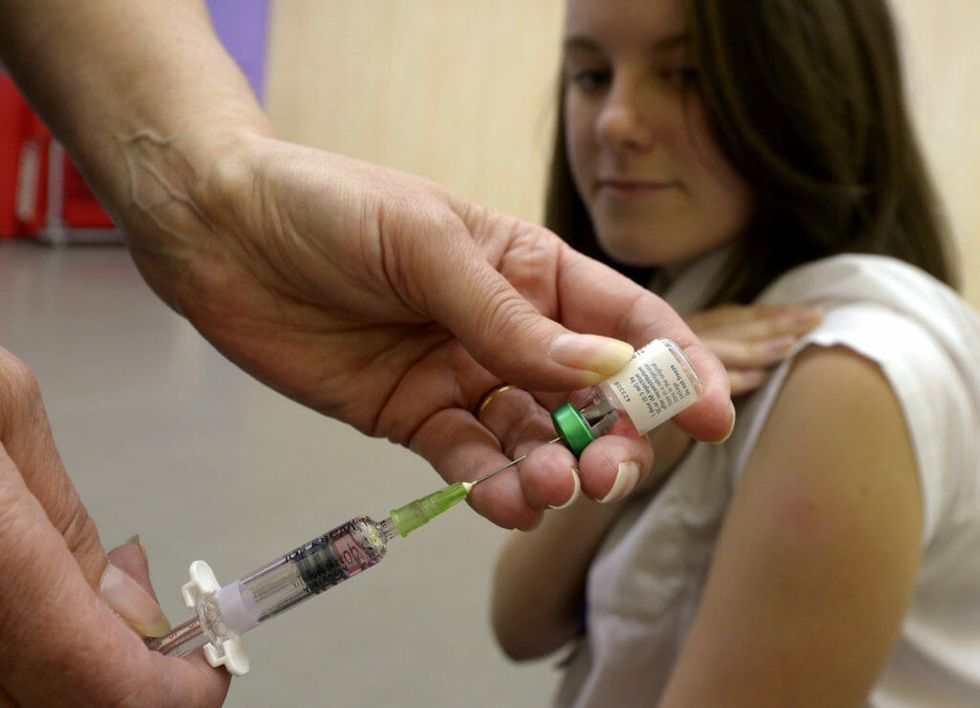 Lucy Butler,15, getting ready to have her measles jab at All Saints School in Ingleby Barwick, Teesside as a national vaccination catch-up campaign has been launched to curb a rise in measles cases in England. (Photo by Owen Humphreys/PA Images via Getty Images)

Anew study has identified many metropolitan and rural areas across the United States that are now in greater danger of preventable disease outbreaks due to low vaccination rates in children.

Eighteen states allow parents to opt out of vaccines and immunizations for “religious or philosophical” reasons (non-medical exemptions, or NMEs), and every state allows exemptions for children who have compromised immune systems. The new study confirms that large segments of parents are exercising their exemptions, resulting in a growing population of citizens unprotected from childhood diseases that were once virtually eradicated.

The affected metropolitan areas include Seattle and Spokane, WA; Phoenix, AZ; Salt Lake City and Provo, UT; Houston, Austin, Fort Worth and Plano, TX; Troy, Warren and Detroit, MI; Portland, OR; and Pittsburgh, PA. Much of Idaho and Wisconsin are also affected.

In particular, the study identified 14 counties where more than 400 kindergarteners were enrolled in public schools without a full complement of recommended vaccinations.

"These NMEs are in fact harming the public health in those 18 states," said Peter J. Hotez, dean of the National School of Tropical Medicine at the Baylor College of Medicine in Houston, and one of the authors of the study. "Once you start dipping below that you're always at risk, and that's what happened in California, in Minnesota.”

California’s 2014 measles outbreak started at Disneyland and ultimately infected 159 people across 18 states. At the time, the measles vaccination rate in Anaheim was 50 to 86 percent. California subsequently eliminated NMEs for school vaccines. Minnesota’s 2017 outbreak infected 78 people, most of whom were not vaccinated.

The anti-vaccine movement has not lost much momentum, even in the wake of the gastroenterologist who originated themodern MMR vaccine controversy, Andrew Wakefield, being disgraced and struck from the UK medical register for his faulty research methodology and conclusions.

Despite thousands of studies that disprove Wakefield’s conclusion that the MMR vaccine was linked to an increase in Autism diagnoses, many parents feel comfortablerelying on herd immunity to keep their own children safe. Others may be swayed by the pseudoscience presented in such documentaries asVaxxed: from Cover-Up to Catastrophe.

Hotez says the risks are clear. "This is a self-inflicted wound," said Hotez. "We can do something about this by closing NMEs.”

While most unvaccinated people who contract measles survive, for people with compromised immune systems and pregnant women, the outcomes can be far worse. Other once common illnesses rendered obsolete by vaccination, from diphtheria to polio, would have more devastating impacts on the greater population.

The new study is just one more reason for state legislatures to re-examine the NME issue, as California has.