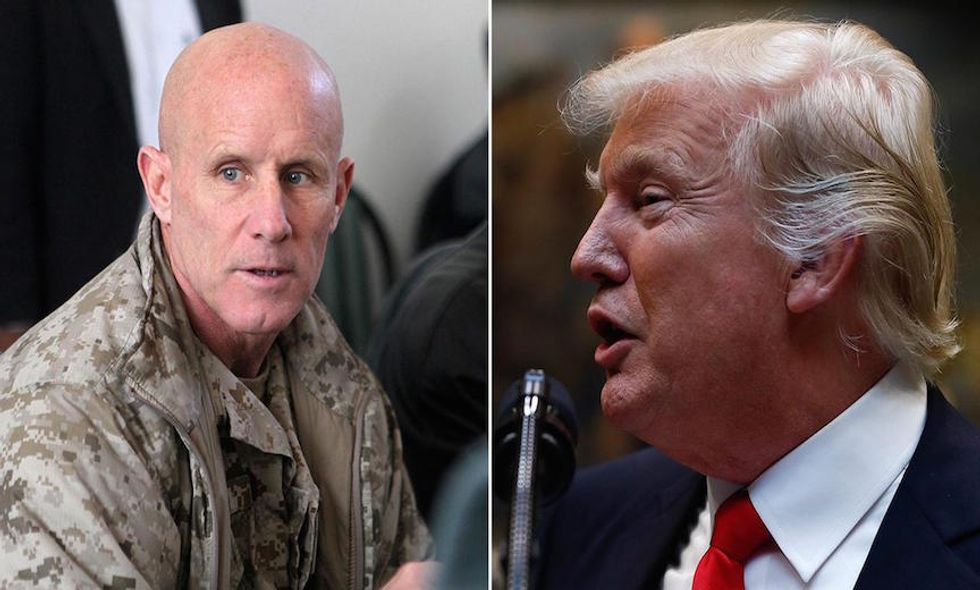 Retired Vice Admiral Robert Harward disappointed President Donald Trump yesterday when he turned down the job of National Security Advisor. Trump had offered Harward the job on Monday and was surprised when Harward asked for more time to consider the offer.

Harward has given different explanations for his reasons. To the AP, Harward said, "It's purely a personal issue. I'm in a unique position finally after being in the military for 40 years to enjoy some personal time." To at least one friend, however, he was far blunter:

The White House officials and Obama and Bush officials have said that they were hoping Harward would take the job to add stability to the Trump administration. Harward spent almost 40 years in the navy, and worked closely with General James Mattis, Trump's Secretary of Defense, as deputy commander of U.S. Central Command. Harward would have replaced Michael Flynn, who resigned as NSA after lying to Vice President Mike Pence about his contacts with the Russians before Trump took office.

Reports say that Harward particularly objected to keeping Deputy National Security Adviser K.T. McFarland in her role. McFarland has not worked in the government for more than thirty years but in recent years appeared frequently on Fox News as a pundit.

Kori Schake, a member of the National Security Council under President George W. Bush, told  Foreign Policy “that the president prefers a national security process with disparate power centers so that he’s not overly reliant on anyone, gets divergent views, has political calculations central to his national security policies, and sustains a high level of unpredictability about what he’ll decide... [Trump] continues to rely most heavily on his political advisers for national security counsel.”

Democrats are criticizing the latest crisis in the Trump administration.

Robert Harward’s decision to not take over General Flynn’s old job is the latest evidence that the Trump WH is falling into utter disarray.
— Nancy Pelosi (@Nancy Pelosi) 1487288517.0

It seems likely that Trump will look more closely at the other two candidates considered for National Security Advisor: acting NSA Keith Kellogg, a retired lieutenant general in the Army, and former CIA director David Petraeus.

Petraeus brings additional controversy. He was forced to resign and convicted of mishandling classified material after sharing classified information with Paula Broadwell. The two were having an affair.  The conservative National Review editorialized against the choice this week, saying "Integrity and truth ultimately do matter, and if Trump wants to be a successful president, he’s going to have to appoint people to high office who won’t violate the public’s trust."