Galactic Gas: What a Belching Black Hole Can Tell Us About Our Galaxy 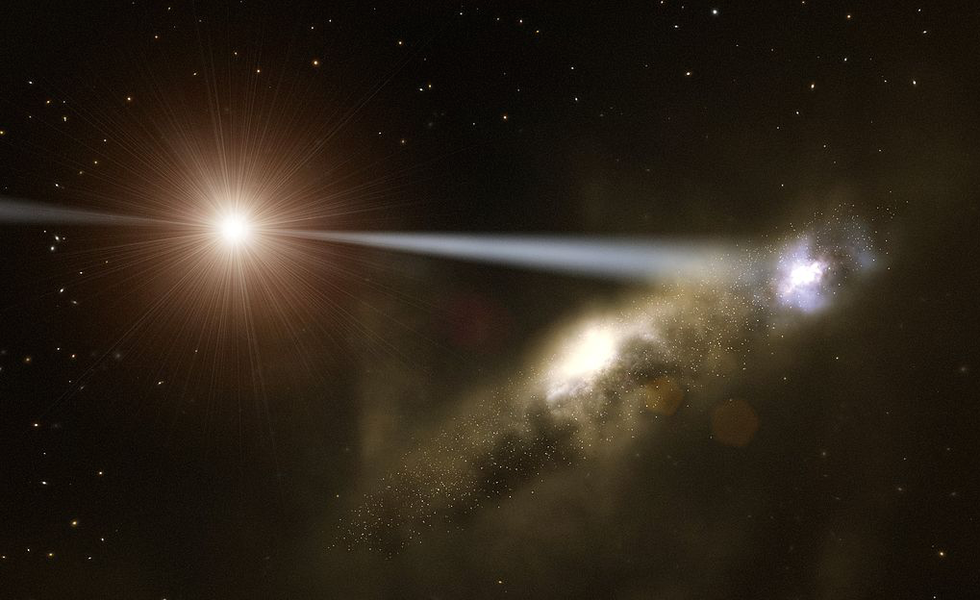 Astronomers at NASA's Chandra X-ray Observatory witnessed this “burping” phenomenon when a supermassive black hole in a nearby galaxy expelled two arcs of X-ray emissions. The study, led by Eric Schlegel of The University of Texas in San Antonio, is significant because it shows that “this behavior would likely happen very often in the early universe, altering the evolution of galaxies.” Schlegel also notes that, while it is common for black holes to expel gas outward, it is rare to have such a close look at these events as they take place.

The playing field for this intergalactic exhibition was the Messier 51 galaxy system, a mere 26 million light-years from Earth. According to NASA, it is currently in the process of merging with a larger one named “The Whirlpool.” A similar occurrence was documented little more than two months ago, in November. The black hole in that particular study guzzled stars and other matter before burping out some of what it had just eaten—all from a startling 300 million light-years away.

Black holes are not picky. They will readily consume anything that comes past their event horizon. This is a point of no return where nothing is seen and nothing can escape. The velocity required to exit would have to be faster than the speed of light, but the theory of relativity tells us that this is impossible.

every galaxy has a black hole at its center. Drawing upon that research, a WISE survey concluded that the number of actively feeding supermassive black holes is well over 2.5 million.

When supermassive black holes swallow hot gases, they sweep cooler hydrogen gas forward, a process which Eric Schlegel and his team liken to a snowplow. When this new gas is released from the black hole, it affects the universe in a process known as feedback. Once this material is unleashed, it has the potential to birth new stars. These new additions to the galaxy might be the remains of a meal that was eaten anywhere between one million and six million years ago; the merger between Messier 51 and The Whirlpool may be responsible. The interaction between this smaller galaxy and a much larger one could result in gas being fed to the black hole. Even a black hole can't gorge itself without an outburst.

The team of scientists estimate that it may have taken one to three million years for the first of the emissions, or the inner arc, to reach its current position, with the outer arc estimated to have traveled between three to six million years before it could be expelled. These findings are significant due to the location of the activity. The outflow from this black hole is well outside the zone where active supermassive black holes have been previously observed in other galaxies. Instead, these arcs are observed within pockets of gas that are present around many galaxies much larger than our own. This means that these findings could be the earliest recorded stage in the feedback process.

Feedback could also have a direct result on the size of a black hole. “We think,” says Marie Machacek of the Harvard-Smithsonian Center for Astrophysics, “that feedback keeps galaxies from becoming too large.” Indeed, a black hole that keeps consuming at whim, says Schlegel, "could become large enough to consume a galaxy.” The Milky Way—and consequently Planet Earth—would be no exception.

In other words, black holes act as siphons, regulating the amount of gas in the galaxy that can be used for star formation. The larger the black hole, the greater its influence on the evolution and individual formation of galaxies. To conceive of that much power is staggering. But these are complex regions of spacetime that have been known to trigger star formation by torpedoing neighboring galaxies. That they could possibly unravel more mysteries about our past—and introduce new theories—might not be so farfetched. There is still so much we do not know.