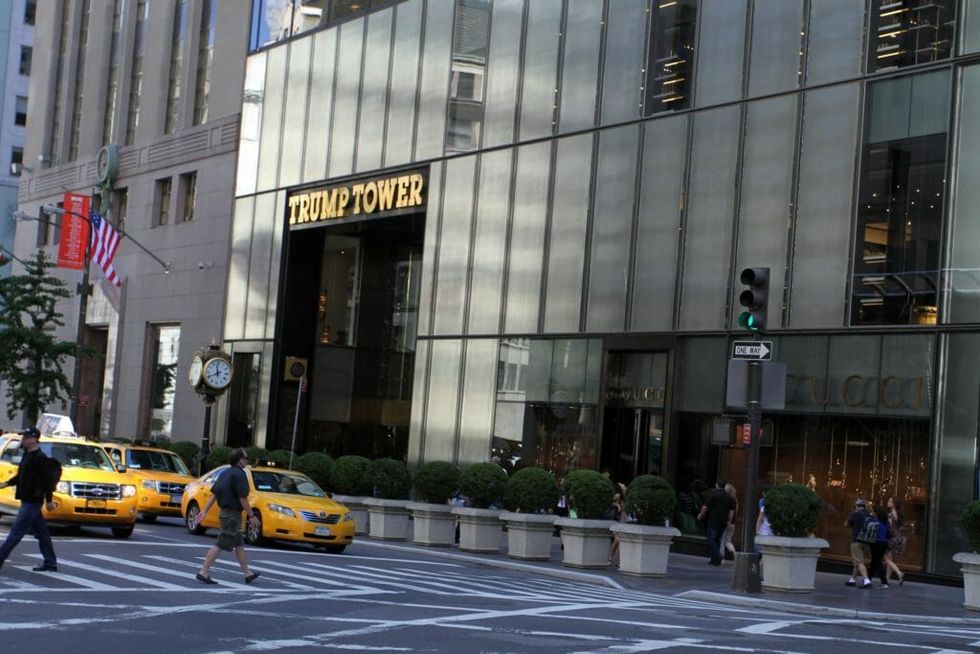 Since the 2016 election, President Donald J. Trump’s critics have complained that his businesses are illegally profiting as a result of his presidency. While it’s true that some Trump-owned or branded properties have seen their fortunes rise, for others the Trump name has become a liability.

The Trump name is emblazoned on at least 50 hotel, condo, and commercial properties worldwide. In addition, the golf-loving president’s name adorns 19 courses from Los Angeles to Indonesia, “representing world-class luxury and excellence synonymous with the Trump brand,” according to the Trump Golf web site. Not all of the properties that bear the Trump name, often presented in shiny gold capital letters, are owned by Trump. Many simply license his name, seeking to literally cash in on the glitz and cachet of the Trump name.

Trump is well known for touting the magnificence of his properties around the world and his purported wizardry in real estate and the art of the deal. From his website: “The Trump Organization is the world’s only global luxury real estate super-brand, and is responsible for many of the world’s most recognized developments.  Trump is renowned for its leadership in real estate development, sales and marketing, and property management representing the highest level of excellence and luxury in residential, office, and retail properties.”

Some of the gilt on his properties, however, has begun to tarnish.

Almost immediately after Trump’s election in November 2016, residents of the 140, 160 and 180 Trump Place apartment buildings on the Upper West Side of Manhattan, which he developed in the 1990s, began clamoring to have the Trump name removed from the buildings. Hundreds of residents signed a “Dump the Trump Name” petition, citing Trump’s “appalling treatment of women, his history of racism, his attacks on immigrants, his mockery of the disabled, his tax avoidance [and] his outright lying.”

Juliet Herman, who has lived in one of the buildings for nine years, was “thrilled” at the news. “I couldn’t be happier,” Herman told The Guardian. “Because honestly I believe in treating people equally, so to me I’d say to feel that my building is no longer a part of the political atmosphere makes me feel good.”

Equity Residential, which owns the buildings, had this to say about the removal of Trump’s name: “We are in the process of rebranding the buildings using their street addresses as the property names,” said Marty McKenna, a spokesman for Equity Residential. “The goal is to assume a more neutral building identity that will appeal to all current and future renters.”

In the past 14 months, luxury hotels in New York, Rio de Janeiro, and Toronto, along with three apartment buildings in New York, have removed the Trump name as condo owners and disgruntled partners seek to distance themselves from the polarizing president.

Residents, hotel guests, and investors say the main cause for their newly developed Trump edifice complex is simple: money.  As the president moves further into his term, the Trump name itself increasingly seems to be depressing property values.

“Our homes are worth more without the Trump name,” Laurence Weiss, a condo owner at New York’s Trump Palace high-rise, wrote to his neighbors last spring. Weiss had listed his penthouse apartment for $15.5 million but found no takers. According to research firm and broker CityRealty, sale prices of Manhattan luxury condo prices are dropping, but homes in the 11 Trump-branded buildings began falling even faster last year. Weiss ended up getting $7.4 million, half of what he had been asking.

But it’s not just about property values. One potential buyer of Weiss’s condo told him that his teenage daughter refused to live in a building with the Trump name on it.

Len Captan, who resides in Trump Tower in White Plains, N.Y., told the Washington Post: “Take it off. Why? Because this man is a danger. I don’t want to be associated with a name like that.”

In Toronto, the owners of a 65-story hotel/condo complex reached a buyout deal with Trump hotels in June 2017 to remove Trump’s name from the property and rename it St. Regis Toronto. Investors had filed a slew of lawsuits against the previous owner, claiming that they lost money on their investments in residential units in the Trump-branded building. That building also has been the site of numerous protests by groups denouncing Trump’s policies as president and his general demeanor. City Councillor Josh Matlow actually has been advocating for a name change since 2015, telling the Toronto Starthat Trump is a “fascist” and his name has no place in a “diverse and respectful” Toronto.

The problem with the president’s name on the Trump International Hotel in Panama City is somewhat more complex. Not only are the owners seeking to get out of the name licensing agreement, they also want to remove Trump’s company from the management of the property. A waterfront, 70-floor building, Trump’s first international hotel venture includes apartments and a casino. But as the Associated Press reported in October 2017, the Miami-based owners of the property moved to remove the Trump Organization’s directors from the hotel board and began terminating Trump’s connection to the property, alleging mismanagement. The Trump Organization has refuted the allegation.

In November 2017, Trump’s Panama City complex was in the news for another reason: a joint Reuters/NBC News investigation found that many of its apartments had been purchased through a Colombian money launderer and two criminals from the former Soviet Union.

The Trump Organization, despite earning between $30 million and $50 million since its opening, issued a statement that sought to distance the company from the project. “The Trump Organization was not the owner, developer or seller of the Trump Ocean Club Panama project,” the statement said. “Because of its limited role, the company was not responsible for the financing of the project and had no involvement in the sale of units or the retention of any real estate brokers.”

Still, today, the Trump name continues to adorn the property.

The president’s real estate empire bowed to pressure in his hometown of New York in November 2017, when it agreed to remove the Trump name from its hotel in lower Manhattan. Trump SoHo, once a favorite New York hotel among visiting professional sports teams, began seeing that client base shrivel up during his divisive campaign as corporate meeting and banquet events went elsewhere.

By 2017, however, the luster was gone. At least 11 of the 12 NBA teams that previously had preferred Trump SoHo now seek other accommodations. Some said they could not stay at a hotel with Trump’s name on it.

“The president has seemingly made a point of dividing us as best he can,” Golden State Warriors coach Steve Kerr told The Washington Post in an interview. His team stopped using Trump SoHo in 2016. “He continually offends people, and so people don’t want to stay at his hotel,” Kerr said. “It’s pretty simple.”

Renamed the Dominick Hotel in late December 2017, the hotel already has experienced a return of some of its previous guests. “People who had stopped staying with us for a while are now interested in coming back,” said Nicole Murano, a spokeswoman for the Dominick.

It’s not all bad news for the Trump real estate empire. At least one property — the Trump International Hotel just a few blocks from the White House in Washington, DC — seems to be thriving. The opulent hotel, which Trump developed after securing a 60-year lease for the Old Post Office building from the federal government, earned Trump’s company $19.7 million in just its first four months of operation according to Trump’s financial disclosure forms. Members of Trump’s cabinet have stayed and even lived there and it has become a magnet for diplomats, lobbyists and conservative groups willing to spend big bucks to hold dinners and other events there.

Government ethics experts and watchdog groups take issue with the president so boldly profiting from his namesake hotel just steps from the White House. They cite the U.S. Constitution’s emoluments clause, which specifically prohibits the president from accepting anything of value from foreign entities. Rep. Peter A. DeFazio (D-Ore.) calls it a “highly unethical arrangement.”

“What makes all of this particularly galling is that we now have the unprecedented situation where the President of the United States is both the landlord and tenant of a federal building,” he said in a July statement.

Results are a bit more mixed for another of Trump’s properties that has been in the news since his inauguration: Mar-a-Lago. On the plus side for Trump, the Palm Beach, FL, resort doubled its initiation fee to $200,000 following his election. Members both new and old are more than happy to pose for pictures with the president whenever he chooses to drop in on weddings and other events at the club.

Before Trump’s election, Mar-a-Lago was the center of the Palm Beach winter social scene. But last summer — after Trump defended white supremacists who incited the Charlottesville, VA, violence — 19 charities that had events booked at the resort abruptly canceled. The property still hosts weddings and dinners for members, but Palm Beach’s social scene has shifted to The Breakers, another Palm Beach club — one that Trump once mocked for getting his “leftovers.”

As reported by the Washington Post’s David Fahrenthold in November 2017, “People will still put on their dancing shoes, and pay big money for their tickets, and go out for the night. [But] instead of going to Mar-a-Lago, they’ll be going to the Breakers,” said Shannon Donnelly, the society editor for the Palm Beach Daily News.