Republicans in Wisconsin Are Moving Forward With an Aggressive Plan to Limit the Powers of Incoming Democratic Governor, and People Are Crying Foul 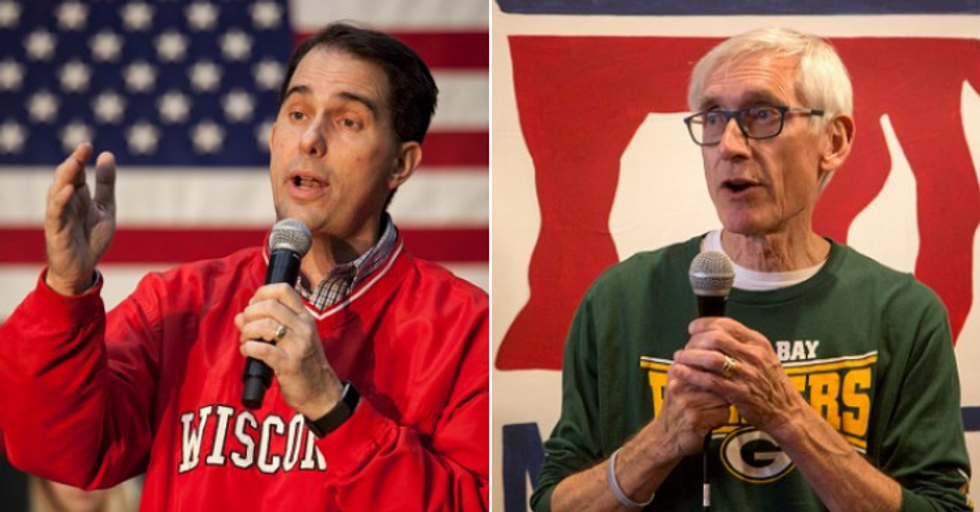 One of the major upsets of the 2018 midterms was the defeat of GOP darling—and President Donald Trump endorsed—Governor Scott Walker of Wisconsin. Even outgoing Speaker of the House Paul Ryan, a fellow Wisconsin Republican, stumped for Walker.

But to no avail. Democratic challenger Tony Evers defeated Walker in a close race.

However the Wisconsin GOP took steps Monday to maintain control of the state, even with Walker losing his reelection bid. In a lame duck session—one that occurs after a general election but before newly elected members are sworn in—Republicans pushed bills to limit the powers of the Governor and move those powers that Walker wielded since he took office in 2011 to the GOP controlled legislature.

The Wisconsin legislature has not held a lame duck session in the past eight years while Republican Scott Walker served as Governor.

"I don’t think it’s outrageous at all. But listen, I’m concerned. I think that Governor-elect Evers is going to bring a liberal agenda to Wisconsin."

Move On founder Ben Wikler broke it down on Twitter.

In Wisconsin, right now, the GOP has total control: the governorship, both chambers of the state legislature, and a… https://t.co/dqybWAPABA
— Ben Wikler (@Ben Wikler) 1543653325.0

Voters in Wisconsin approved Evers "liberal agenda" when electing him, leading protesters at the state capital in Madison to shout:

In addition to drawing public protest, the GOP's actions brought the threat of lawsuits and claims by Democratic Governor-elect Tony Evers and others that their actions effectively invalidate November's election results.

"It goes to the heart of what democracy is all about. I think it’s the wrong message, I think it is an embarrassment for the state and I think we can stop it."

"I view this as a repudiation of the last election. I will take any steps possible to assure the people of Wisconsin that I will not invalidate those votes."

Among the limits the GOP hopes to place on incoming Governor Evers include:

Immediately after the election results were announced in November, the Republican Speaker of the Wisconsin House stated:

"Maybe we made some mistakes giving too much power to Gov. Walker and I'd be open to looking at that to see if there are areas we should change that."

But in no time during the eight years Walker served as Governor did the GOP express the same concern over gubernatorial powers.

People are understandably upset about the move by the Wisconsin GOP.

People pointed out that this is not the first time the GOP has done something like this at the state level.

The Wisconsin and Michigan GOP were called "pathetic" and "sore losers."

It is disgraceful that Republicans in Wisconsin and Michigan, having lost on Nov. 6, are trying to decrease the pow… https://t.co/vQR3QCKwf0
— Bernie Sanders (@Bernie Sanders) 1543867890.0

Whether or not the efforts in Wisconsin and other states prove successful remains to be seen.