In a Tweet Touting U.S. Job Growth, the White House Just Accidentally Told the Truth About the Economy 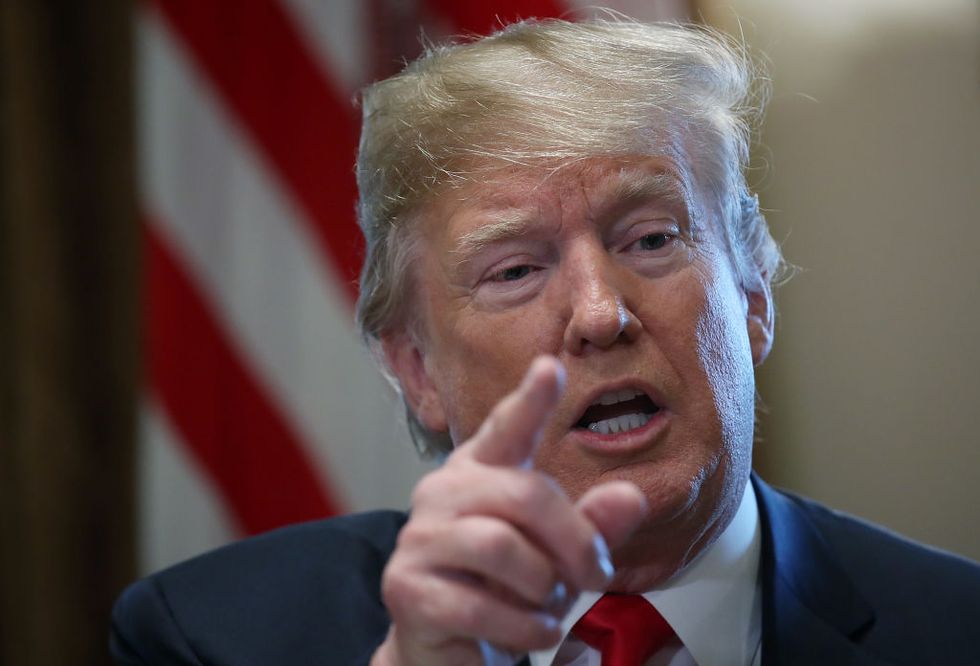 WASHINGTON, DC - JUNE 20: U.S. President Donald Trump speaks on immigration issues while meeting with members of the U.S. Congress in the Cabinet Room of the White House June 20, 2018 in Washington, DC. Trump said he would sign an executive order later today relating to the issue of immigrant children being separated from their parents while being detained. (Photo by Win McNamee/Getty Images)

In a tweet touting U.S. job growth under Trump, the White House today accidentally put the strength of the economy into its proper context by amplifying a graph showing 94 months of consecutive job growth, going back to 2011.

This context is usually conveniently missing from Donald Trump's claims about the economy, of course. And if you click through to the whitehouse.gov article linked in the tweet, they once again do their best to conflate the record number of consecutive months of growth with the presidency of Donald Trump:

The United States economy is continuing its longest streak of consecutive positive monthly job growth at 94 months, with 3.9 million jobs created since President Donald J. Trump was elected in November 2016.

But this contradiction did not escape the eagle eyes on social media, which quickly called out the White House for its attempt to take credit for Barack Obama's economic legacy.

@WhiteHouse @realDonaldTrump How did Trump manage to arrange all those years of job growth while Obama was still president?
— Ben Stephens (@Ben Stephens) 1533665923.0

You can thank Obama for the 94 months of job growth, but here's the report from the White House:

The United States economy is continuing its longest streak of consecutive positive monthly job growth at 94 months, with 3.9 million jobs created since President Donald J. Trump was elected in November 2016.

Although the Bureau of Labor Statistics (BLS) monthly Employment Situation Report shows that nonfarm payroll employment rose by 157,000 jobs in July, falling short of expectations, the average job growth per month is 215,000 for 2018—exceeding average monthly gains in 2016 (195K) and 2017 (182K)—once cumulative positive revisions to May and June are included.

Job growth has been strong across the board during the first 18 months of this Administration, and in July the manufacturing and professional & business services industries experienced significant gains. Since President Trump was elected, goods-producing industries (construction, manufacturing, mining, and logging) have added more than 900,000 jobs.

The report continues, noting that:

The employment-population ratio, which is an important indicator of the share of people who are working, rose by 0.1 p.p. in July to 60.5 percent. This marks its highest point since January 2009 (see figure). Since January 2017, the employment-population ratio has increased by 0.6 p.p., which is a sign that more workers are finding jobs and coming off the sidelines, which is good news for America’s economy.

Given what we know about when Obama was president and when Trump entered office, it stands to reason that the current rate of U.S. job growth does not indicate, as the White House suggests, "that the American labor market is thriving under the Trump Administration’s pro-growth policies."

Over the past few days, President Trump has taken to lauding himself for the nation's economic successes.

In one tweet, for instance, he said his "Presidential Approval numbers are very good - strong economy, military and just about everything else."

In another, he claimed that "Great financial numbers [are] being announced on an almost daily basis" and that the economy "has never been better, jobs at best point in history."

But even that claim is misleading. Economists have warned that U.S. job growth is largely the result of government borrowing, and there will be more borrowing as the federal deficit rises because of the president's tax cuts. This progress, unfortunately, is unlikely to be sustainable after a few quarters. And although the United States is on track to add 2.6 million jobs this year, an Associated Pressinvestigation found that the boom favors Democratic strongholds, not areas which Trump won in 2016.