He's denying he said what we all heard him say. 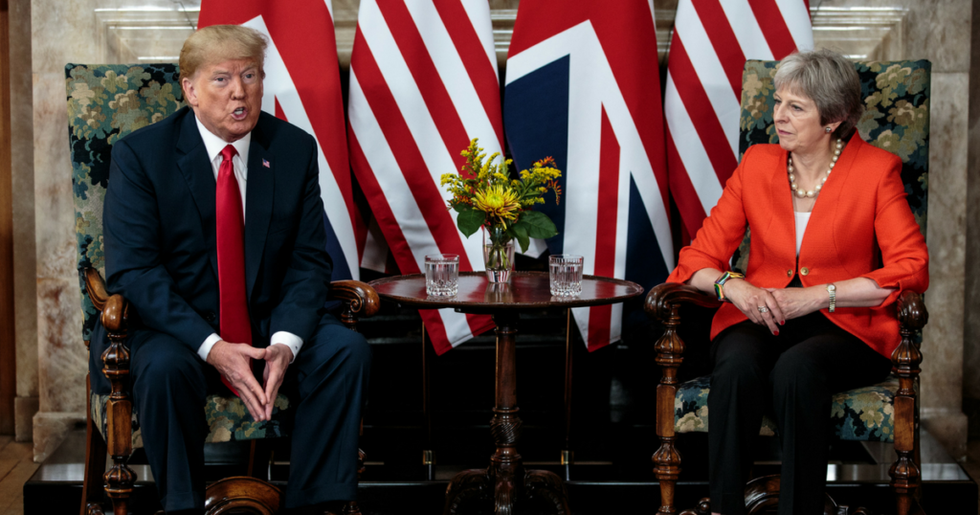 Prior to his Friday visit to the United Kingdom, President Donald Trump gave an exclusive interview to The Sun in which he blasted British Prime Minister Theresa May for her handling of Brexit.

Trump claimed May ignored his advice on how to handle negotiations on Britain's exit from the European Union, which was approved by voter referendum in 2016. The president said May has gone "the opposite way" of what he had suggested and that the results have been "very unfortunate."

But when pressed about the interview on Friday, Trump denied making incendiary claims against May, calling such reports "fake news" even though the interview was recorded.

Yup, @realDonaldTrump just asserted he would be vindicated by a recording as he lied about not having criticized th… https://t.co/LCCPAkUiD8
— Ken Dilanian (@Ken Dilanian) 1531487486.0

"Fortunately, we tend to record stories now," Trump said. "We record when we deal with reporters. It's called 'fake news.'"

Now the president of the United States is accusing @kwelkernbc of "dishonest reporting," because she asked a fact-b… https://t.co/HTbtspSMNR
— Ken Dilanian (@Ken Dilanian) 1531487850.0

Reporters pounced on the president's "gaslighting."

Twitter slammed Trump for calling his own words "fake news."

This walk back of his recorded comments echoes a statement from White House Press Secretary Sarah Huckabee Sanders that seems to have been dictated directly by Trump.

"Where are your manners," Parliament member Sam Gyimah tweeted.

Sarah Wollaston, a conservative member of Parliament, said Trump was “determined to insult” May. “The divisive, dog-whistle rhetoric in his Sun interview is repulsive," she added. "If signing up to the Trumpworldvieww is the price of a deal, it’s not worth paying.”

Ben Bradshaw, who belongs to the Labor Party, wrote: “Our prime minister is so weak she still rolls out the red carpet for a man who does nothing but insult her. Humiliating.”

“The theory that if we are nice to Trump he’ll be nice to us doesn’t seem to be going brilliantly," former Labor Party head Ed Miliband tweeted on Friday.

Others on Twitter joined in the harsh rebukes of Trump's criticism of the British Prime Minister.

"Trump's a racist," one user wrote.

@SamGyimah I agree, but more to the point, why did your party leader invite Trump to the UK in the first place? Tru… https://t.co/wc708xINEn
— Barendina Smedley (@Barendina Smedley) 1531471101.0

Another person said the president's "behavior" is intended to "disrupt" and "destabilize Europe."

@SamGyimah His insults, behaviour are by design to disrupt, destabilise Europe. His manners are in the same place a… https://t.co/UalgnTP3dx
— Rob Smith (@Rob Smith) 1531472296.0

Referring to Trump's "manners," one follower of Gyimah said, "he has none."

"He's a narcissist and dangerous."

@RupertBathMusic @SamGyimah He's a narcissist and dangerous. The GOP and millions are either stupid or evil...eithe… https://t.co/jZxqGGD5fS
— Ginny Alden (@Ginny Alden) 1531487358.0

Others expressed dismay over Trump's invite to the U.K., which one person said was "ill-conceived."

@SamGyimah He has long proved that he considers himself above manners. His words and actions over the last 24 hours… https://t.co/B6SKHSSEyG
— Todd Atticus (@Todd Atticus) 1531474451.0

Lest we forget, a giant baby Trump blimp is drifting over London today as thousands of protesters fill the streets of the British capital. Trump attended a lunch with May in Chequers and had his schedule changed to avoid being exposed to the London protests.

“I guess when they put out blimps to make me feel unwelcome, no reason for me to go to London,” Trump told The Sun. “I used to love London as a city. I haven’t been there in a long time. But when they make you feel unwelcome, why would I stay there?”

The Trump baby blimp is up over Westminster. One of the most surreal images of Westminster Abbey and Parliament in… https://t.co/J4v8Mmubwh
— Brian Klaas (@Brian Klaas) 1531469307.0

In his interview with The Sun, Trump also:

Blamed Khan for spiralling crime in the capital

Denied once branding Theresa May a “bossy schoolteacher”

Demanded Britain and other Nato countries spend more on defence

May has proposed sticking with an EU rulebook that would keep customs borders open for the exchange of goods and agriculture. But Trump said doing so would kill any potential future trade deal with the United States.

Trump continued: "we have enough difficulty with the European Union," adding that the EU hasn't "treated the United States fairly on trading."

No, if they do that I would say that that would probably end a major trade relationship with the United States.

Trump then took a swing at May's future as Prime Minister, telling The Sun that Boris Johnson, Britain's former Foreign Minister who resigned last Monday and May's chief political arch-rival, would “make a great Prime Minister" because "he's been very nice to me."