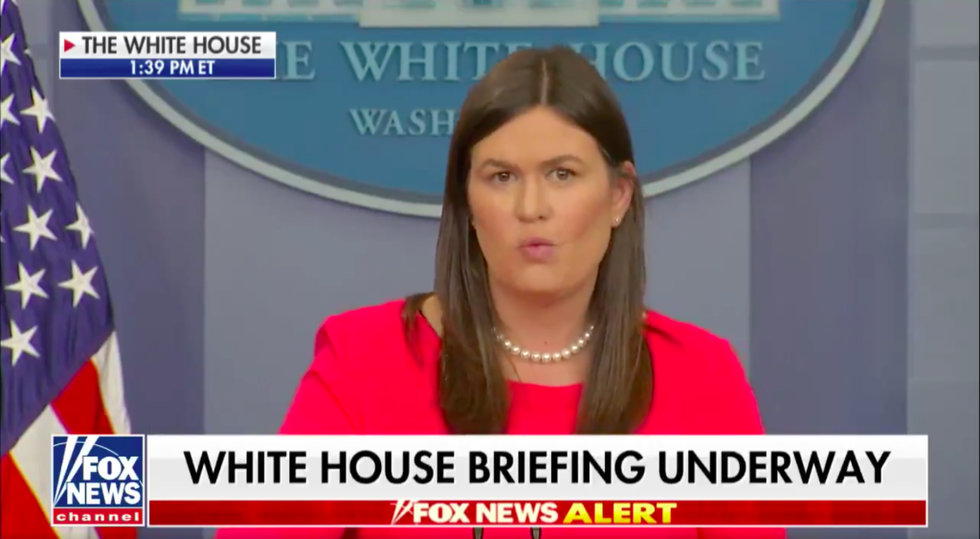 White House Press Secretary Sarah Huckabee Sanders defended President Donald Trump amid reports that he'd referred to immigrants as "animals" and suggested that anyone who took issue with the president's comments is defending MS-13, an international criminal gang with many members who are Central American in origin.

"If the media and liberals want to defend MS-13, they're more than welcome to," White House press secretary Sanders told reporters. "Frankly, I don't think the term the president used is strong enough."

Some of the president's most fervent supporters soon joined Sanders in lambasting the media.

David Clarke, a former law enforcement official who was once temporarily blocked by Twitter for appearing to encourage violence against the media, took umbrage with a New York Times report titled "Trump Calls Some Unauthorized Immigrants 'Animals' in Rant."

“'Unauthorized' immigrants the NY Times calls them? They are ILLEGAL ALIENS and they are trespassers generally," Clarke wrote. "The MS-13 that @realDonaldTrump was specifically referring to ARE ANIMALS. Only the Lying Lib Media is sympathetic to this violent vicious gang."

Diamond and Silk, a pair of conservative vloggers, slammed "the left wing media" for not knowing "the difference between MS-13 Gang members and law abiding citizens."

The two women alleged that members of the media are "trying to score brownie points by showing love to thugs."

Do the left wing media know the difference between MS-13 Gang members and law abiding citizens? They must be trying… https://t.co/y6gVXD4jqq
— Diamond and Silk® (@Diamond and Silk®) 1526578649.0

"The media: These MS-13 gang members are definitely not animals. Their motto of “Kill, Rape, Control” is misunderstood and we should love and accept them," he wrote. "Not the hill I’d die in guys, but you do you."

MSNBC host Chris Hayes soon waded into the mix, observing that this "MS-13 nonsense has precisely the same structure as the racist drug war rhetoric of the crack years."

"Sarah Huckabee Sanders is attempting to portray criticisms of the president's statement as a defense of MS-13, which isn't just dishonest, it's gross AF," wrote Olivia Nuzzi, a Washington correspondent for New York.

Sarah Huckabee Sanders is attempting to portray criticisms of the president's statement as a defense of MS-13, whic… https://t.co/LnBi9u5PbR
— Olivia Nuzzi (@Olivia Nuzzi) 1526579085.0

The uproar over the president's rhetoric on immigration began after analogized illegal immigrants whom he claimed are part of gangs to animals during a meeting with California officials who oppose the state’s position on sanctuary cities.

California’s immigration laws, Trump added, are “the dumbest laws on immigration in the world.”

The president blamed Democrats for passing legislation which forces immigration agents to break up families.

“I know what you’re going through right now with families is very tough. But those are the bad laws the Democrats gave us,” Trump said, referencing a new Department of Homeland Security policy that would potentially result in familial separations at the border, with parents separated from their children as they await their criminal proceedings.

Trump also criticized Oakland Mayor Libby Schaaf’s decision to inform residents of Oakland ahead of an impending ICE raid. The president said Schaaf’s action amounted to “obstruction of justice” because many of those who were targeted fled before immigration agents could arrive:

They all fled, or most of them fled. The whole operation took a long time to put together. You talk about obstruction of justice — I would recommend that you look into obstruction of justice for the mayor of Oakland, California, Jeff [Sessions]. She advises thousand people … ‘Get out of here, the law enforcement’s coming.’ And you worked on that long and hard and you got there and there were very few people there.

Perhaps the Department of Justice can look into that, with respect to the mayor, because it’s a big deal out there, and a lot of people are very angry about what happened.

Schaaf has defended her action, saying she did not break any laws.

“I was sharing information in a way that was legal and was not obstructing justice,” she said a few days after she issued her warning, “and it was an opportunity to ensure that people were aware of their rights.”

The president “is lying on immigration, lying about crime and lying about the laws of CA,” Brown wrote on Twitter. “Flying in a dozen Republican politicians to flatter him and praise his reckless policies changes nothing. We, the citizens of the fifth largest economy in the world, are not impressed.”

🤥 @realDonaldTrump is lying on immigration, lying about crime and lying about the laws of CA. Flying in a dozen Rep… https://t.co/qhTUvohRhg
— Jerry Brown (@Jerry Brown) 1526501657.0

Ahead of the California meeting, Trump, during a visit to Capitol Hill, demanded that Congress expedite legislation approving the construction of the wall along the Mexican border.

“We are calling on Congress to secure our borders, support our border agents, stop sanctuary cities and shut down policies that release violent criminals back into our communities,” Trump said at an event outside the Capitol honoring law enforcement officers who died in the line of duty. “We don’t want it any longer. We’ve had it. Enough is enough.”

The president's rhetoric sparked similar controversy earlier this year after reports surfaced that he had made disparagingly racist remarks about immigrants from Haiti and African nations during a meeting with Congressional leaders.

“Why are we having all these people from shithole countries come here?” the president asked, according to lawmakers who were present at the meeting.

The president then suggested that the United States should instead bring more people from countries such as Norway before singling out Haiti. “Why do we need more Haitians?” he also asked. “Take them out.”