The NRA Wasted No Time Exploiting Kanye West's Oval Office Rant, So Of Course Eric Trump Is Cheering Them On 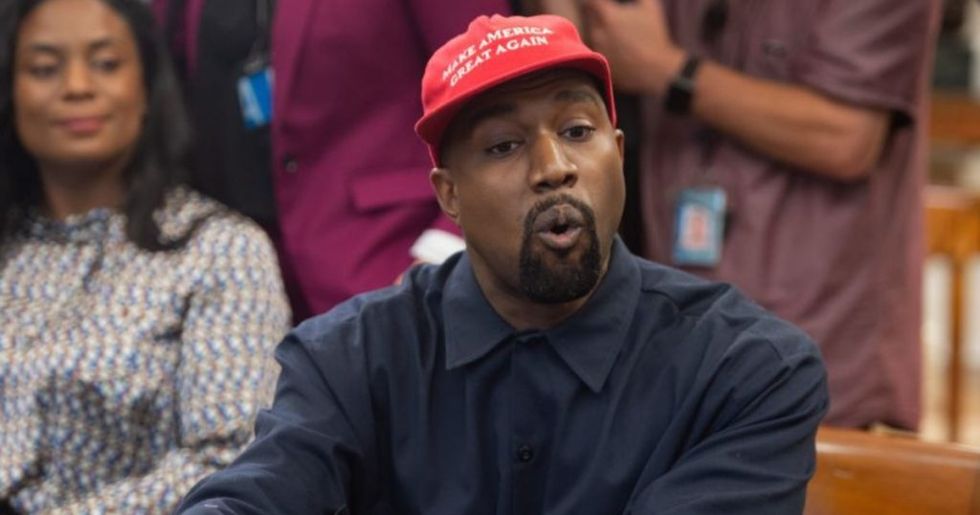 Kanye West meets with US President Donald Trump in the Oval Office of the White House in Washington, DC, October 11, 2018. (Photo by SAUL LOEB / AFP)

Kanye West's rambling meeting with President Donald Trump yesterday––and his off-the-cuff, disjointed statements––left many people scratching their heads, but his comments on the Second Amendment have already received praise from the NRA.

West "couldn't have said it better," the NRA said in a message posted to their official Twitter account, a reference to West's claim that “The problem is illegal guns. Illegal guns is the problem, not legal guns."

West's comments were also lauded by Eric Trump. "Good guys (who register, get licensed and own guns legally) are not the issue — Bad guys and criminals are!" he wrote.

The NRA was criticized, with at least one person pointing out that the organization has not immediately jumped to defend the rights of black citizens to bear arms, most notably when the organization did not immediately defend Philando Castile, who was shot during a traffic stop after telling a police officer he had a firearm he was licensed to carry. The officer shot him as he reached into his pocket for his wallet and identification.

Others pointed out that all of the recent mass shootings in the United States were perpetrated by individuals who had legally registered firearms.

@NRA @realDonaldTrump So many things wrong here, but let’s just START with the fact that all of the recent mass sho… https://t.co/rMZeQefgwq
— Chrissy Hennessey (@Chrissy Hennessey) 1539296298.0

@EricTrump If you gained any insight or knowledge from this pool rambling man you are dumber than I imagined.
— Cynthia Elliott (@Cynthia Elliott) 1539355476.0

Sometimes unlikely figures emerge in American history to play important roles, illuminating important truths. And Kanye West in his own eccentric way, has exposed the intolerance of the left. Their denunciations of his White House appearance were immediate and withering. ...

West is being subjected to the attacks that await any black conservative who dares to break ranks with the Democratic monolith. Liberals treat these entertainers like pawns who are not allowed to deviate from the leftist groupthink at all. God protect any Hispanic, gay or black who  goes his or her own way politically.

"I'm not going to say that rapper Kanye West is Thomas Sewell or Clarence Thomas," she continued. "But I will say that unless he is doing a giant punking of America, he has guts and gusto. Just because he dares to think for himself, to think differently, in his outspoken, over-the-top manner, he is pilloried by the politically correct performers in politics and journalism and of course in the entertainment industry. He represents a danger to the left because of his huge cultural influence. And moments like this, they are absolutely intolerable and frightening to liberals."

West's comment on the Second Amendment was just the tip of the iceberg, however.

There were many other remarks West made which left political commentators and members of the public alike scratching their heads in disbelief (psychologists have suggested he suffers from bipolar disorder):

Political commentator S.E. Cupp observed that West, whose mental health punctuated by erratic behavior has often come under scrutiny, was “clearly not okay,” and wanly stated that the president is “willing to exploit” West’s condition for personal gain.

“He’s been a terrific guy,” Trump told reporters of West before departing the White House for Iowa. “You know, he loves what we’re doing for African-American jobs, for so many different things. Median income, as you see, at an all-time high. Poverty level at the best rate — meaning the lowest rate so far. And Kanye is a smart guy. And he sees that.”