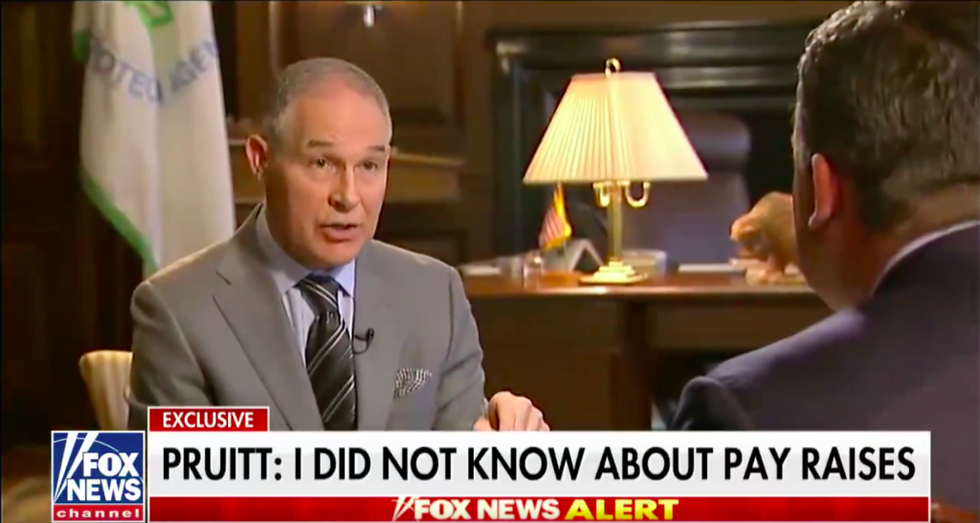 In an interview aired yesterday on Fox News, Scott Pruitt, President Donald Trump's administrator for the Environmental Protection Agency, denied that the EPA used its authority under the Safe Drinking Water Act to give two of Pruitt’s closest aides significant pay increases after the White House refused to authorize them.

The two staffers––Sarah Greenwalt and Millan Hupp––happened to be friends of Pruitt's from Oklahoma, and Pruitt claimed that they were due to receive pay raises anyway.

“If you’re committed to the Trump agenda, why did you go around the president and the White House to give pay raises to two staffers?” asked Ed Henry, who interviewed Pruitt yesterday.

“I did not,” Pruitt said. “My staff did. I found out about that yesterday and I changed it. I issued a statement yesterday walking back those pay raises that should not have been done."

“Is someone going to be fired for that?” asked Henry.

“There will be some accountability,” Pruitt replied.

“A career person or a political person?” Henry said.

"You don't know?" Henry said, appearing miffed. "You run the agency. You don’t know who did this?”

“I found out about this yesterday and I corrected the action,” Pruitt responded.

According to a report from The Atlantic, the staffers were set to receive a $28,000 pay raise and a $56,000 pay raise respectively:

According to a source with direct knowledge of the meeting, held in the Eisenhower Executive Office Building, staffers from the Presidential Personnel Office dismissed Pruitt’s application. The White House, the source said, declined to approve the raises.

So Pruitt found another way.

A provision of the Safe Drinking Water Act allows the EPA administrator to hire up to 30 people into the agency, without White House or congressional approval. The provision, meant to help expedite the hiring of experts and allow for more flexible staffing, became law in 1996. In past administrations, it has been used to hire specialists into custom-made roles in especially stressed offices, according to Bob Perciasepe, a former acting EPA administrator.

After the White House rejected their request, Pruitt’s team studied the particulars of the Safe Drinking Water provision, according to the source with direct knowledge of these events. By reappointing Greenwalt and Hupp under this authority, they learned, Pruitt could exercise total control over their contracts and grant the raises on his own.

ICYMI, from me and @lachlan: John Kelly called Scott Pruitt to ask if there was anything else he needed to know ab… https://t.co/a32WNYZ9cJ
— Asawin Suebsaeng (@Asawin Suebsaeng) 1522932612.0

The scandal, according to an EPA official who spoke to The Atlantic on condition of anonymity, "has completely gutted any morale I had left to put up with this place.”

The pay raises, other officials have said, are indicative of Pruitt's disregard for the White House's warnings and his tendency to play favorites with his staff members.

In a statement, EPA spokeswoman Jahan Wilcox claimed that Pruitt was "not aware" of the implications of his actions:

The Safe Drinking Water Act provides the EPA with broad authority to appoint scientific, engineering, professional, legal, and administrative positions within EPA without regard to the civil service laws.  This is clear authority that has been relied on by previous administrations. The Administrator was not aware that these personnel actions had not been submitted to the Presidential Personnel Office. So, the Administrator has directed that they be submitted to the Presidential Personnel Office for review.

But this wasn't all Ed Henry grilled Pruitt on––Pruitt also found himself defending his use of a Capitol Hill condo that he rented for $50 a night. Pruitt's use of the space is the target of ethical concerns because the condo is owned by J. Steven and Vicki Hart. Mr. Hart is a lobbyist in the healthcare arena.

“Is draining the swamp renting an apartment from the wife of a Washington lobbyist?” Henry asked.

I don’t think that’s remotely fair to ask that question,” Pruitt said. He noted that ethics officials have defended his actions and admitted paying only $50 a night for the condo.

When Henry observed that those who pay a mortgage on their home still pay for the house even when they don’t sleep there and referred to the arrangement as "a sweetheart deal," Pruitt was adamant that he only used the condo whenever he happened to be in Washington D.C.

“This is a tremendous difference. I wasn’t using the facility when I wasn’t there,” Pruitt said.

"Have you made mistakes?” Henry asked.

“I think this is something that needs to be corrected,” Pruitt said, in a response very similar to the one he gave when asked about staff pay raises. “It was a mistake by my team.”