Donald Trump Just Referred to Kim Jong Un as His 'Friend' in a Tweet, and Now People Keep Reminding Trump of All the Evil S**t His 'Friend' Has Done 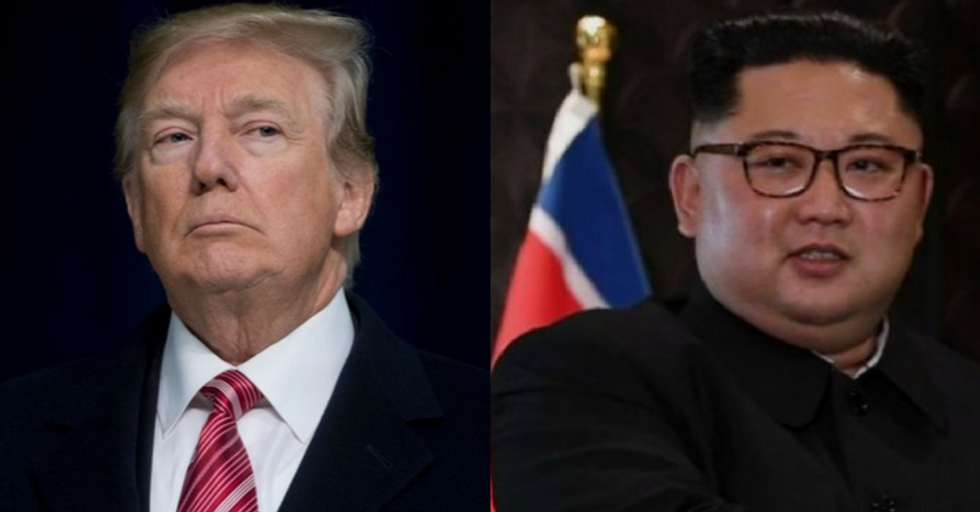 The world was watching President Donald Trump as he arrived in Hanoi, Vietnam for his summit with North Korean Dictator Kim Jong Un.

The US President tweeted a shout-out to his "friend", Kim Jong Un, talking about the "awesome" opportunity for North Korea if they denuclearize.

In case you missed it, Trump's buddy Kim Jong Un is a totalitarian dictator who ordered the assassination of his uncle and his half-brother, and who tortures and kills political prisoners.

Not everyone was as psyched about the president getting cozy with Kim Jong Un for that very reason, so they took to Twitter to remind him..

Trump calling a murderous dictator his “friend” and every Republican just nodding along is really an understated ab… https://t.co/BMPIhllsJD
— Dan Pfeiffer (@Dan Pfeiffer) 1551238259.0

Kim Jong Un and Trump have had a tumultuous relationship, with Trump calling Kim Jong Un a "madman" and Kim Jong Un referring to Trump as "mentally deranged U.S. dotard."

All's fair in love and denuclearization, though, and Trump and Kim's friendship has weathered the Twitterstorm, with Trump even calling Kim a "great leader" as they met in Hanoi on Wednesday.

That alliance, however, may not be the best news for the country Donald Trump has been tasked with representing.

@realDonaldTrump “Friend”? Kim Jong-un assassinated a family member with a nerve agent in an airport, murdered a yo… https://t.co/7COy5LQTfz
— Brian Klaas (@Brian Klaas) 1551235165.0