Trump Tears Into Media In Off The Rails Speech, Media Claps Back 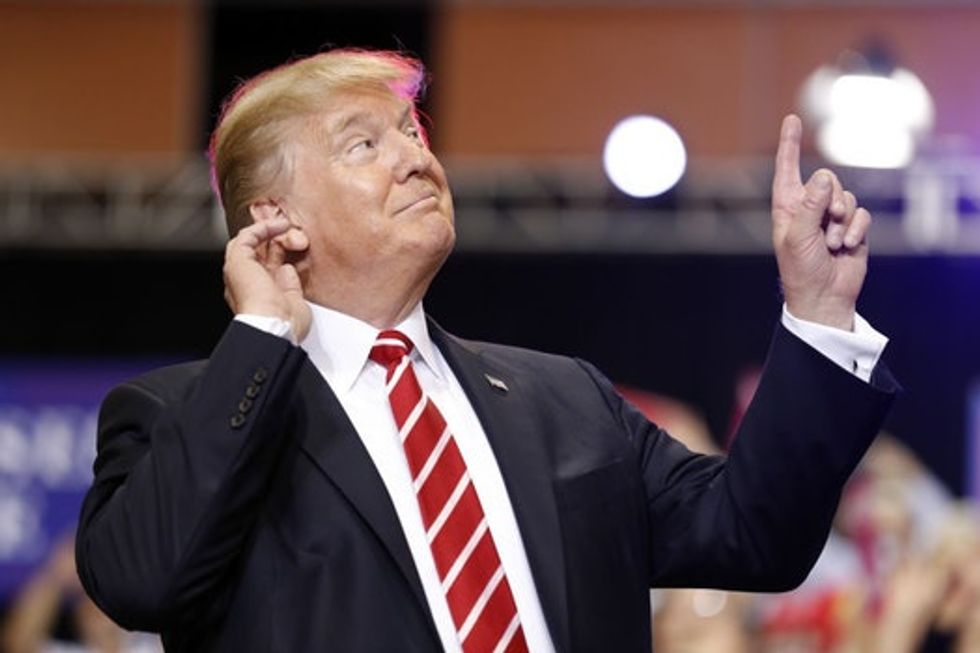 President Donald Trump tore into the media in a blistering off the rails speech at the Phoenix Convention Center, attacking coverage of his response to the violence which erupted at the "Unite the Right" rally in Charlottesville, Virginia.

“It’s time to expose the crooked media deceptions and to challenge the media for their role in fomenting divisions and yes, by the way, they are trying to take away our history and our heritage," he declared.

The president proceeded to read out his initial remarks on Charlottesville line by line, telling his audience: “I strongly condemned the white supremacists, neo-Nazis, and the K.K.K. They know it because they were all there. You know where my heart is. I’m really doing this to show you how damned dishonest these people are … I don’t want to bore you with this but it shows you how dishonest they are.”

He mocked the media, calling out “the failing New York Times” and The Washington Post, which he branded “a lobbying tool for Amazon."

“And then they say, is he a racist? And then I did a second one,” he said, referring to another statement he gave. “And then I said, racism is evil. Did they report that I said racism was evil? They all say what a bad guy I am. And then you wonder why CNN is doing relatively poorly in the ratings. They put seven people, all anti-Trump, and then they fired Jeffrey Lord!” he said, referring to the commentator who was fired after tweeting “Seig Heil” at a critic. (At this, the crowd booed loudly, breaking into a chorus of "CNN sucks!")

“The words were perfect,” Trump said of his own words about Charlottesville. “They only take out anything they think of, and all they do is complain. The media can attack me, but where I draw the line is when they attack you, the decency of our supporters. You are honest, hard-working, tax-paying—and you’re over-taxed, but we’re going to get your taxes down—Americans. It’s time to expose the crooked media deceptions and to challenge the media for their role in fomenting divisions. They are trying to take away our history and our heritage.”

“What we have witnessed was a total eclipse of the facts,” Lemon said. “Someone who came out on stage and lied directly to the American people. And left things out that he said in an attempt to rewrite history, especially when it comes to Charlottesville.”

“He’s unhinged, it’s embarrassing—and I don’t mean for us, the media because he went after us—but for the country,” Lemon added. “This is who we elected president of the United States.” He described the speech as being “without thought,” “without reason,” “devoid of facts,” and “devoid of wisdom.”

Lemon further admonished the president for inflaming racial hostilities, likening him to a “child blaming a sibling” for something he did.

“He certainly opened up the race wound from Charlottesville,” Lemon said, calling Trump “a man clearly wounded by rational people abandoning him in droves."

Trump "played all his greatest hits,” noted Tom Bevan of Real Clear Politics on Fox News. “Obviously, the crowd waited outside … the base is still there. They want to see the show he puts on.” Bevan did criticize Trump, however, for “relitigating Charlottesville."

"If he's going to cover any ground, I'm not sure he made any of that ground up tonight. He was talking to his base, his supporters about his agenda," he said.

"they don't like our country" - president delivering a message of healing and reconciliation
— Dave Itzkoff (@Dave Itzkoff) 1503456005.0

Thousands of people gathered outside the Phoenix Convention Center ahead of the president's speech to protest his first political speech after the violence in Charlottesville. Police used smoke bombs and tear gas on the crowds after plastic bottles were reportedly thrown. No arrests were made as of last night.