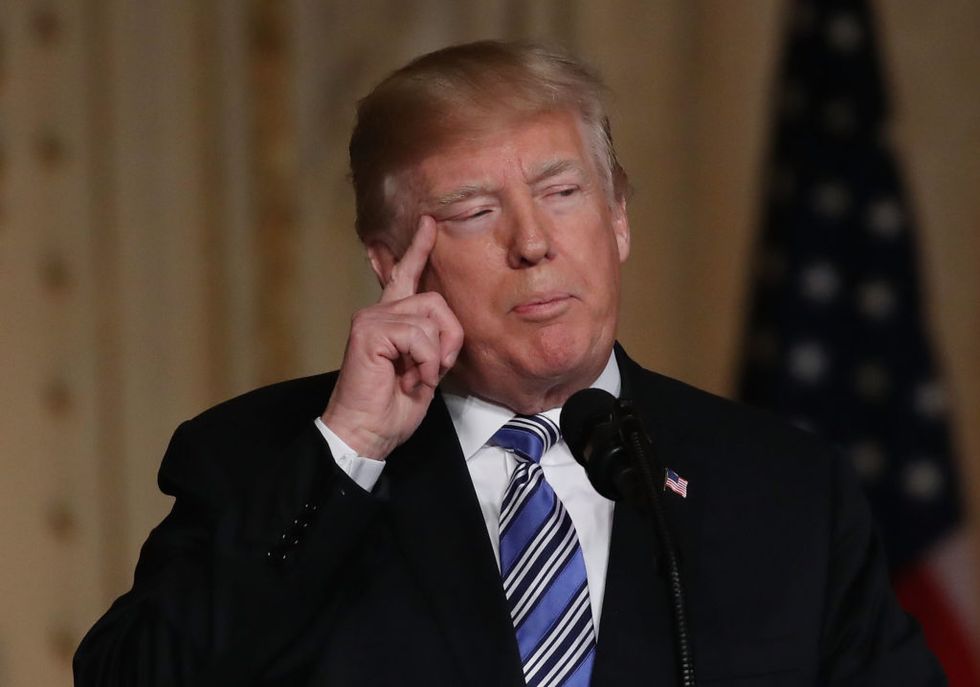 President Donald Trump lied his way onto the Forbes 400 list, according to investigative journalist and former Forbes reporter Jonathan Greenberg.

In a blistering Op-Ed in Friday's Washington Post, Greenberg alleges that in 1984, Trump posed as a Trump Organization official, "John Barron," who Greenberg said was trying to convince him of "how loaded Donald J. Trump really was."

Greenberg recalls that Trump's personal wealth in 1984 was evaluated at $200 million, even though Trump claimed to be worth nearly five times that amount.

In May 1984, an official from the Trump Organization called to tell me how rich Donald J. Trump was. I was reporting for the Forbes 400, the magazine’s annual ranking of America’s richest people, for the third year. In the previous edition, we’d valued Trump’s holdings at $200 million, only one-fifth of what he claimed to own in our interviews. This time, his aide urged me on the phone, I needed to understand just how loaded Trump really was.

While re-listening to his old recordings recently, Greenberg realized that "John Barron" was actually Trump.

When I recently rediscovered and listened, for the first time since that year, to the tapes I made of this and other phone calls, I was amazed that I didn’t see through the ruse: Although Trump altered some cadences and affected a slightly stronger New York accent, it was clearly him.

"Barron" explained to Greenberg that “most of the assets have been consolidated to Mr. Trump... you have down Fred Trump [as half owner] . . . but I think you can really use Donald Trump now.”

Trump, through this sockpuppet, was telling me he owned “in excess of 90 percent” of his family’s business. With all the home runs Trump was hitting in real estate, Barron told me, he should be called a billionaire.

Greenberg was immediately skeptical of the claim of Trump being a billionaire.

At the time, I suspected that some of this was untrue. I ran Trump’s assertions to the ground, and for many years I was proud of the fact that Forbes had called him on his distortions and based his net worth on what I thought was solid research.

Greenberg opines that in hindsight, Trump should never have been on Forbes' list when it debuted in 1982. Government documents wrote Greenberg proved Trump was grossly overinflating his personal fortune.

In our first-ever list, in 1982, we included him at $100 million, but Trump was actually worth roughly $5 million — a paltry sum by the standards of his super-monied peers — as a spate of government reports and books showed only much later.

"Trump was obsessed" with the list from its onset, Greenberg recalled.

The project could offer a clear, supposedly authoritative declaration of his status as a player, and while many of the super-rich wanted to keep their names off the ranking, Trump was desperate to scale it.

Trump's intent to mislead Forbes about his wealth was not the only time the future president would pose as another person in outlining his wealth.

Although Trump, posing as Barron, asked Forbes to conduct the conversation off the record, I am publishing it here. I believe an intent to deceive — both with the made-up persona and the content of the call — released me from my good-faith pledge. In a 1990 court case, Trump testified that he had used false names in phone calls to reporters. In 2016, when The Washington Post published a similar recording, Trump denied it was him.

It turns out, as it was revealed through a 1981 report from the New Jersey Casino Control Commission, Trump's income and assets were disclosed when he applied for a casino license in Atlantic City.

They found that he had an income of about $100,000 a year, while his 1979 tax returns showed a $3.4 million taxable loss. Trump’s personal assets consisted of a $1 million trust fund that Fred Trump provided to each of his children and grandchildren, a few checking accounts with about $400,000 in them and a 1977 Mercedes 450SL.

Nothing in the financial disclosure made any mention of Trump's alleged stake in his father's real estate company. Trump owned a few highly-leveraged pieces of land, "financed with $22.5 million in debt, all of it secured by his father’s assets."

He did not own a safe deposit box or stocks in publicly traded companies. In sum, Trump was worth less than $5 million, not the $100 million that I reported in the first Forbes 400.

In a letter to Forbes in 1989, Trump claimed to be worth $3.7 billion with $900 million cash on hand. “I am more liquid than any major developer in the United States,” Trump asserted, resulting in Forbes upping his reported net worth to $1.7 billion.

This, however, was again negated by a 1991 report by the New Jersey Casino Commission. Trump's entire liquidity was a mere $19 million.

By the end of 1990 Trump’s entire cash position — in both his business and personal accounts — was just $19 million. The amount was insufficient to pay the debt on his over-leveraged casino and real estate holdings while still covering his personal expenses of $1 million per month. His net worth, the commission estimated, was $205 million — less than 6 percent of what he’d told Forbes. In 1990, the magazine dropped Trump from the list and kept him off it for five years.

"But Trump was so competent in conning me that, until 35 years later, I did not know I had been conned," Greenberg wrote. "But he has never released his tax returns, and he has said that the core Trump Organization asset is the ownership of his brand — an ineffable marketing claim that is impossible to substantiate or refute."

Many folks on Twitter were unsurprised by Greenberg's story.

@washingtonpost Biggest con man there ever was now he has conned his way into the presidency
— Mary Langseth (@Mary Langseth) 1524231020.0

@washingtonpost Trump is so pathetic. He posed as a man named “John Barron” and then lied to Forbes Magazine in ord… https://t.co/Pt1rNAJdY5
— Andrea Junker (@Andrea Junker) 1524230963.0

@washingtonpost NOTHING NEW HERE. TRUMP was lying then.TRUMP has been lying since and TRUMP will keep on lying Day after Day.
— John Andrushkoff (@John Andrushkoff) 1524231108.0

Others called the Op-Ed fake news. The irony is rich. The White House and Forbes both declined to comment on this story.