The Trumps Arrived in Germany for the G20 Summit. It Didn't Go Well.

The president reportedly could not find a hotel room in time, violent protests halt his wife's plans. 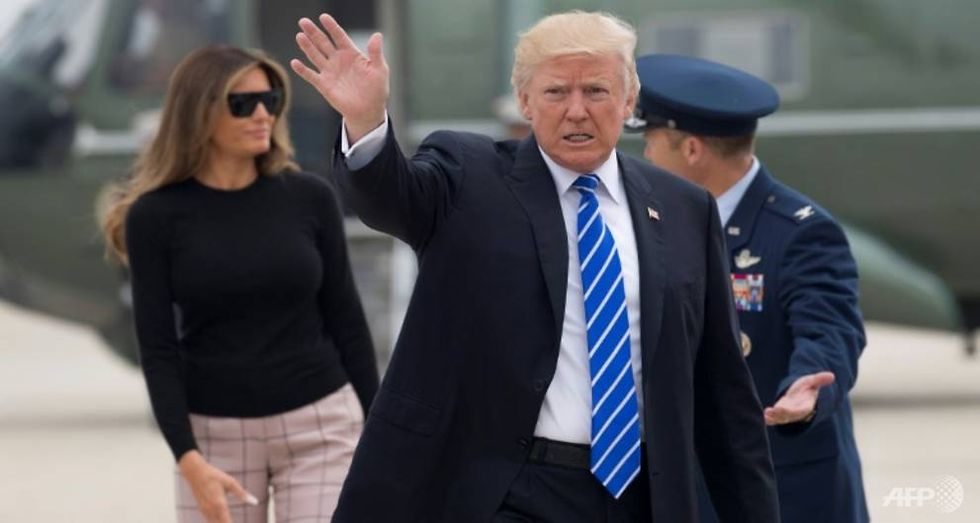 President Donald Trump owns hotels around the world, but it appears he can't book a room in Hamburg, Germany.

Ahead of G20 summit in Hamburg: Local media reports that Trump got rejected by city's top luxury hotel & has to stay in a state residence
— Mathieu von Rohr (@Mathieu von Rohr) 1498507695.0

As world leaders converge for the G20 summit, reports indicate that White House officials waited too long before reserving hotel rooms for Trump and his traveling staff in time for the international conference. Trump failed to find accommodations at the Four Seasons––his first choice––because of Saudi Arabia’s King Salman and his enormous entourage, which includes camels for fresh milk, and a golden escalator. Salman "booked all 156 guest rooms and suites, along with a number of rooms in the Hotel Renaissance and The Westin in the Elbphilharmonie, a concert hall," according to one report.

Weeks before the summit, reports suggested Trump might seek accomodations in Berlin, 180 miles away, and commute to Hamburg via helicopter. That plan also collapsed––and vacancies don't appear to be the issue. A spokesperson for the Berlin InterContinental who spoke to German newspaper Die Welt noted that the hotel typically doesn't comment on its guests, “But in this case, we say clearly: No, he does not stay with us.”

With the summit fast approaching, the city of Hamburg stepped in to remedy the situation, allowing the president to stay in the Senate guesthouse. Although officials would neither confirm nor deny details (only saying that "a summit delegation" is being accommodated), The Associated Press reports that the estate will host Trump and that the U.S. Consulate General in Hamburg will prepare to host Trump's staff.

First Lady Melania Trump also ran into some trouble. Although she was able to find a hotel room––she chose to stay elsewhere––security concerns stemming from ongoing protests outside the G20 summit prevented her from partaking in spouses events that traditionally take place during the gathering. The spouses had been scheduled to take a boat ride, gather for lunch and visit a climate control center with Joachim Sauer, the husband of German Chancellor Angela Merkel.

More than 10,000 people have stormed the streets amid President Trump's arrival. Some participants have attacked authorities, and at least 15 Hamburg police officers have sustained injuries in the unrest. German riot police have deployed tear gas, smoke bombs and water cannons to disperse the demonstrators. The First Lady later tweeted hopes for everyone's safety.