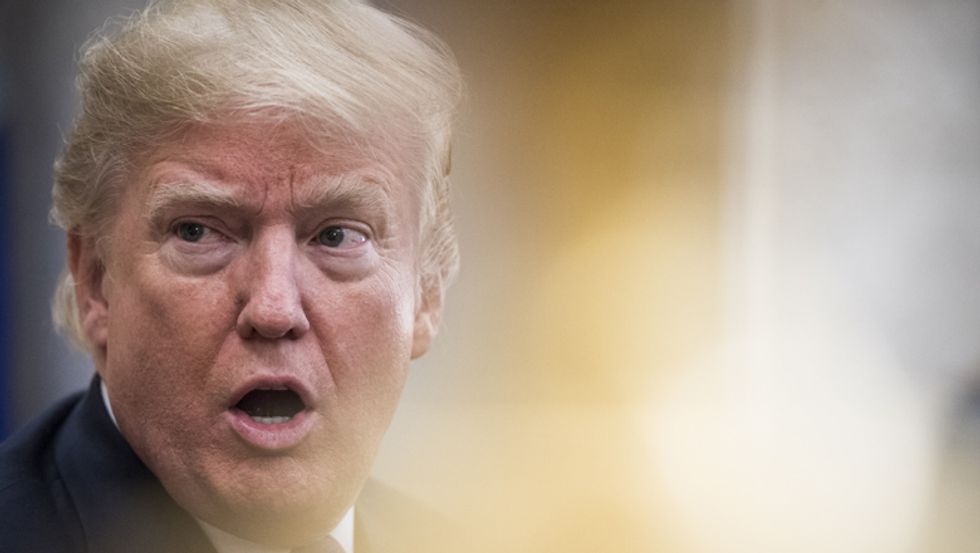 President Donald Trump speaks with Governor Ricardo Rossello of Puerto Rico during a meeting in the Oval Office of the White House in Washington, D.C. on Thursday, Oct. 19, 2017. (Jabin Botsford/The Washington Post via Getty Images)

President Donald Trump signed a Presidential Executive Order amending Executive Order 13223, which may signal a new war for the United States. The original executive order 13223 was signed into law on September 14, 2001, by then-President Bush following the 9/11 terrorist attacks carried out by al-Qaeda operatives.

The full text of the original executive order can be read here. In it, Bush suspended "certain laws relating to promotion, involuntary retirement, and separation of commissioned officers."

The one today, signed into law by Trump, extends the state of emergency and allows the federal government to recall into service any "retired member of the Regular Army, Regular Navy, Regular Air Force, or RegularMarine Corps."

The text can be interpreted as saying that Trump wants to go to war and wants to make sure no military personnel who have left lately or intend on soon leaving can leave. Unlike Bush, whose executive order forced service extensions on soldiers who were already serving when 9/11 happened, Trump is giving himself the power to recall anyone who's ever served in the military in the past.

Some have suggested that this is "the storm" Trump casually mentioned in front of reporters in early October. “Could be the calm before the storm,” Trump said. “From Iran?” asked one reporter. “On ISIS? On what?”

The full text of the new executive order by Trump can be read here.

Trump is not the first president to extend Bush-era 9/11 laws. USA Today writes, "Last month, President Trump became the third president to renew the post-9/11 state of national emergency, which allows the president to call up the national guard, hire and fire officers and delay retirements."

However, the amendment recalling troops is a new addition. The White House has yet to comment about the latest addendum.