Donald Trump Just Tweeted a Bonkers Claim About the Economic Recovery, and Twitter Is Bringing the Receipts 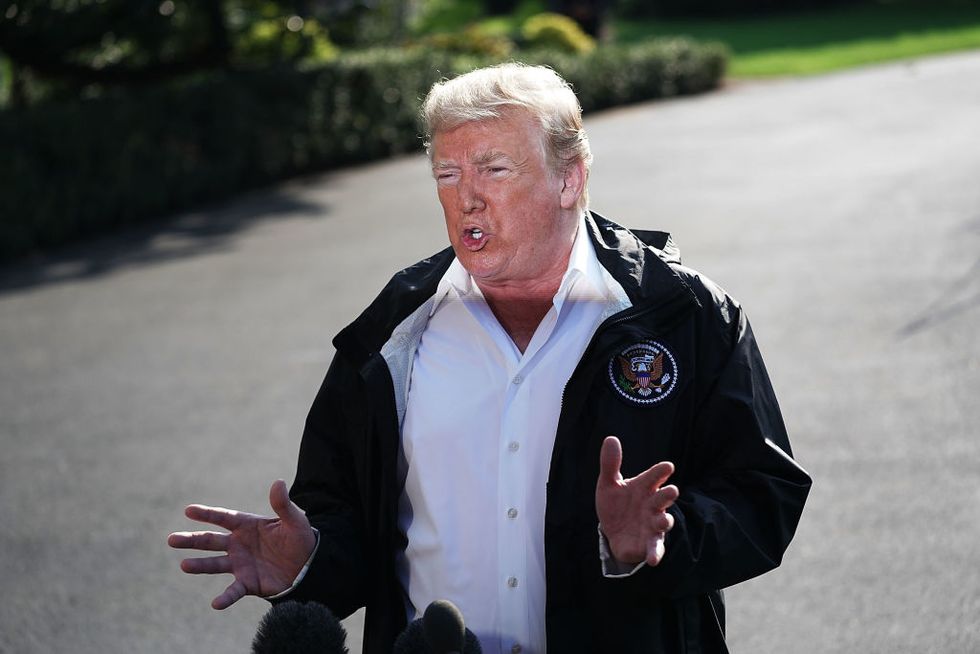 WASHINGTON, DC - SEPTEMBER 19: U.S. President Donald Trump speaks to members of the media prior to a Marine One departure at the South Lawn of the White House September 19, 2018 in Washington, DC. President Trump is traveling to North and South Carolinas to visit the area that was affected by Hurricane Florence. (Photo by Alex Wong/Getty Images)

President Donald Trump, in a couple of tweets earlier today, quoted Fox News contributor Peter Ferrara, who, in an appearance on "Fox and Friends"––the president's show of choice––claimed that the nation's economic recovery "got started on Election Day 2016." Ferrara, an attorney and policy analyst, credited Trump's "tax cuts and regulation cuts" for the healthy economy.

This claim was quickly shown to be incorrect. Digital strategist John Aravosis pointed out that economy actually grew faster under Trump's predecessor.

It was Aaron Sojourner, a labor economist and associate professor at the University of Minnesota's Carlson School of Management, who provided the most succinct counters to the president's claim.

Sojourner debunked Trump's claim, using data on everything from jobs...

@realDonaldTrump Check out the trend in the # of JOBS JOBS JOBS (graph). Can you see when the recovery really got s… https://t.co/dMnp1rYXtK
— Aaron Sojourner (@Aaron Sojourner) 1537359150.0

@realDonaldTrump Check out the trend in unemployment rates (graph). Can you see when the recovery really got starte… https://t.co/Ip4Eppwxkd
— Aaron Sojourner (@Aaron Sojourner) 1537359185.0

@realDonaldTrump Check out the trend in the # of job openings (graph). Can you see when the recovery really got sta… https://t.co/Rb0LszJOvv
— Aaron Sojourner (@Aaron Sojourner) 1537359224.0

...to the number of initial jobless claims...

@realDonaldTrump Check out the trend in the initial jobless claims (graph). Can you see when the recovery really go… https://t.co/y0KkhhyOSk
— Aaron Sojourner (@Aaron Sojourner) 1537359254.0

@realDonaldTrump Check out the trend in the GDP (graph). Can you see when the recovery really got started? https://t.co/6rWmMQaDLz
— Aaron Sojourner (@Aaron Sojourner) 1537359437.0

...and even real median household income.

@realDonaldTrump Check out the trend in real median household income (graph). Can you see when the recovery really… https://t.co/QNzATJIU4K
— Aaron Sojourner (@Aaron Sojourner) 1537359711.0

This is far from the first time Trump––and the White House––has attempted to obfuscate Obama's legacy.

Last month, in a tweet touting U.S. job growth under Trump, the White House accidentally put the strength of the economy into its proper context by amplifying a graph showing 94 months of consecutive job growth, going back to 2011.

This context is usually conveniently missing from Trump’s claims about the economy, of course. And if you click through to the whitehouse.gov article linked in the tweet, they once again do their best to conflate the record number of consecutive months of growth with the presidency of Donald Trump:

"The United States economy is continuing its longest streak of consecutive positive monthly job growth at 94 months, with 3.9 million jobs created since President Donald J. Trump was elected in November 2016."

And no, this didn't escape the eagle eyes of social media then, either.

Although Trump has often claimed that the economy has "never been better," economists have warned that U.S. job growth is largely the result of government borrowing, and there will be more borrowing as the federal deficit rises because of the president’s tax cuts. This progress, unfortunately, is unlikely to be sustainable after a few quarters. And although the United States is on track to add 2.6 million jobs this year, an Associated Press investigation found that the boom favors Democratic strongholds, not areas which Trump won in 2016.