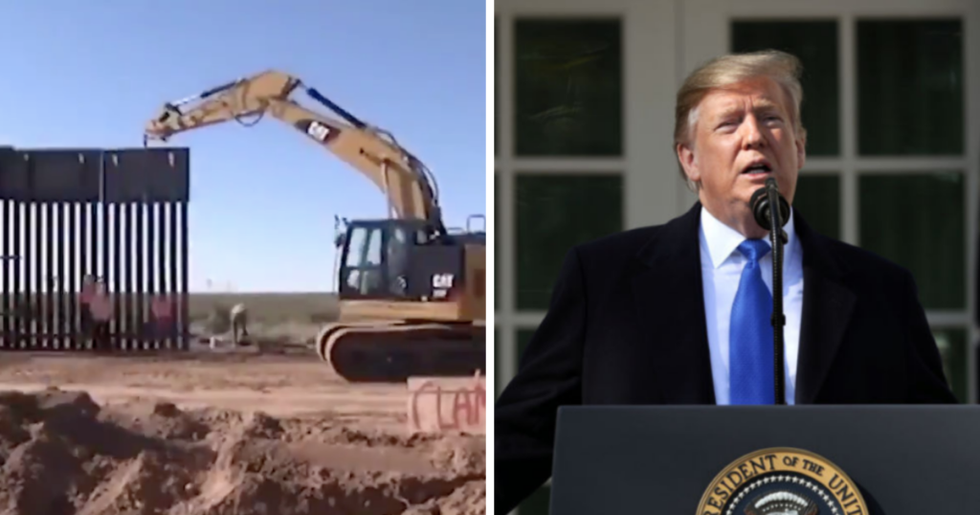 President Donald Trump claimed that a portion of his proposed border wall has been officially constructed, this section in New Mexico, introducing a new hashtag in the process.

"We have just built this powerful Wall in New Mexico. Completed on January 30, 2019 – 47 days ahead of schedule! Many miles more now under construction! #FinishTheWall," the president wrote beneath a time-lapse video of a construction crew mounting a steel slatted barrier into the earth.

He previously unveiled the phrase as a slogan at a rally in El Paso, Texas. It's likely he's hoping the hashtag catches similar momentum as #BuildTheWall did over the course of his campaign and and throughout his presidency.

The problem: No new sections of the border wall the president insists is so necessary for border security have been allotted. What construction that has happened has served to replace portions of other, existing barriers already in place and approved by Congress last year.

In October 2018, construction workers "put up the final panel of a new border barrier" in Calexico, California, according to The Los Angeles Times, which points out:

The estimated $18-million project replaced just over two miles of a 1990s barrier made of steel Vietnam War-era military aircraft landing mats with 30-foot bollards — poles placed close together to restrict entry but allow people on either side to see through. ...

Planning for the barrier replacement project began in 2009, but funding and construction came under the Trump administration. The only characteristic the new structure shares with Trump’s border wall prototypes is its height. At 30 feet, it towers over older fencing in the El Centro sector, which at the highest rises to about 20 feet.

A construction crew did complete a section of fencing in New Mexico––but that was in August 2018, per CBS DFW, for a project, valued at $73 million, that had begun four months prior.

Congress has never provided the funding for a border wall. The president (and his video) were swiftly called out.

@realDonaldTrump congratulations on not screwing up on the repair job on an existing barrier that was planned and b… https://t.co/gNpnMm0UGC
— Jeff Tiedrich (@Jeff Tiedrich) 1550689311.0

@ChatByCC @realDonaldTrump He hasn’t started building the wall. This is a repair job to existing fence that Obama a… https://t.co/Ebi6UpiBkL
— Snow (@Snow) 1550690703.0

@realDonaldTrump Only your dim-witted cult members are buying this ridiculous garbage, Donnie. Anyone with half a b… https://t.co/ozH0wtCpx8
— Charles Johnson (@Charles Johnson) 1550690389.0

The president's claim is misleading because last week he declared a national emergency to access billions of dollars to construct a wall at the U.S.-Mexico border after Congress denied his requests for funding. The declaration has ignited a dispute about separation of powers, and the president’s reasoning is likely to face legal challenges.

Many took the president’s statement as further evidence that he is seeking to bypass Congress to fulfill a campaign promise he made to his base. Although 16 states have filed a lawsuit challenging his national emergency declaration, the White House intends to move forward with plans to shift existing federal funds to pay for the wall's construction.

A source close to the White House said that the White House does not plan to spend any of the funds that "hinge on Trump's national emergency declaration" and will instead "focus on building new portions of border wall using funds from the Defense Department's drug interdiction program and Treasury Department's asset forfeiture fund, which do not rely on the national emergency declaration." Those funds total an approximate $3.1 billion.

Speaking to reporters yesterday, Trump said he's not worried about the lawsuits and claimed that the administration is already "working with the Army Corps of Engineers" to move forward with construction of more border fencing.

"I think we'll do very well. We have an absolute right to do that," Trump said. "We need strong borders. We have to stop drugs and crime and criminals and human trafficking and we have to stop all of those things that a strong wall will stop."