We Now Know How Much Donald Trump's Policies Are Really Costing Us, and Yep, There Goes the Deficit 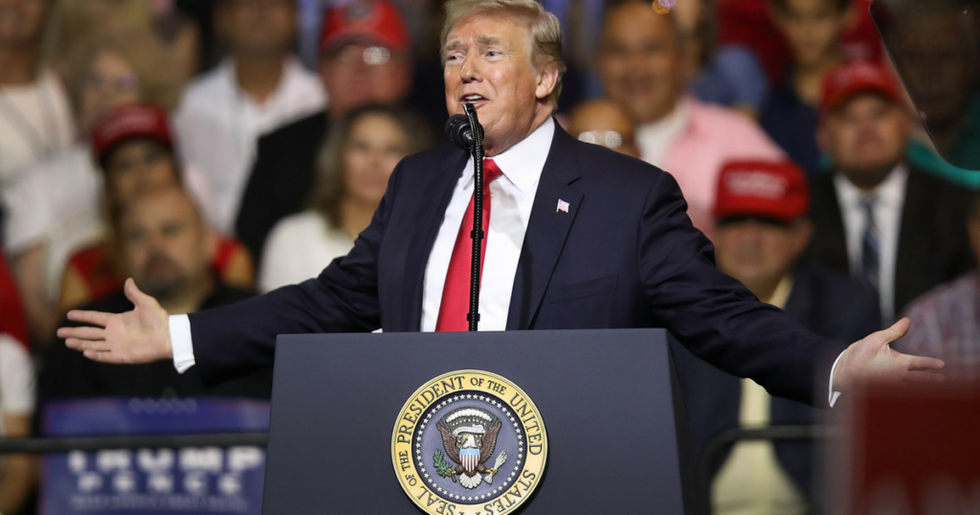 President Donald Trump's tax cuts have exploded the federal budget deficit according to a new report issued by the non-partisan Congressional Budget Office.

The CBO released its findings on Wednesday that the Tax Cuts & Jobs Act combined with increased spending will drive the deficit up to $793 billion by the end of 2018 and will push it to $1 trillion next year - a 20 percent increase over 2017's $666 billion deficit.

This is because the federal government borrowed $116 billion more this year than it did last year.

The rest of the report is bleak.

The CBO projected that if the federal government continues to be starved of revenue, absent spending cuts to offset lower tax rates, the United States will essentially be insolvent by the 2030s.

The CBO said that if tax rates remain the same through 2026, "federal debt would equal 148 percent of GDP in 2038 and continue to rise in later years."

If tax rates are again lowered after 2028 and revenue decreases compared to GDP, "debt would equal 151 percent of GDP in 2038 and keep rising thereafter."

Most alarmingly is the CBO's projection of the effect of another tax cut "after 2018," which calculated that the "debt would equal 165 percent of GDP in 2038 and keep rising."

In 30 years, the CBO projects, servicing the national debt will become the government's largest expenditure, surpassing Social Security and defense - and that's only on the interest.

Additionally, the CBO said that unchecked borrowing is "increasing the likelihood of a fiscal crisis—a situation in which the interest rate on federal debt rise abruptly, dramatically increasing the cost of government borrowing."

Granted, the economy grew by an impressive 4.1 percent in Q2 of 2018, however, growth would have to be much higher to reduce the deficit, the CBO said.

Concerned citizens on social media were quick to ask why Republicans, who claim to be debt and deficit hawks, seem unconcerned over the nation's ballooning debt and deficit.

@thehill Waiting for the Tea Party protests about our deficit climbing and saddling our children with debt. Or was… https://t.co/sJHCcjwwVO
— Royal Priest (@Royal Priest) 1533739704.0

Trump gets the blame because he's the president. And because he said his tax cuts would reduce the deficit.

@thehill Once again, @realDonaldTrump and the @GOP are taking America into the abyss of debt and deficits. This cos… https://t.co/VtnGZm7qPc
— Michael Rich (@Michael Rich) 1533740294.0

Of course, there is one possibility...

@thehill @SpeakerRyan where's the outrage Mr. Speaker? I guess deficits only matter when there is a black man in office???
— Erik Griffis (@Erik Griffis) 1533739554.0