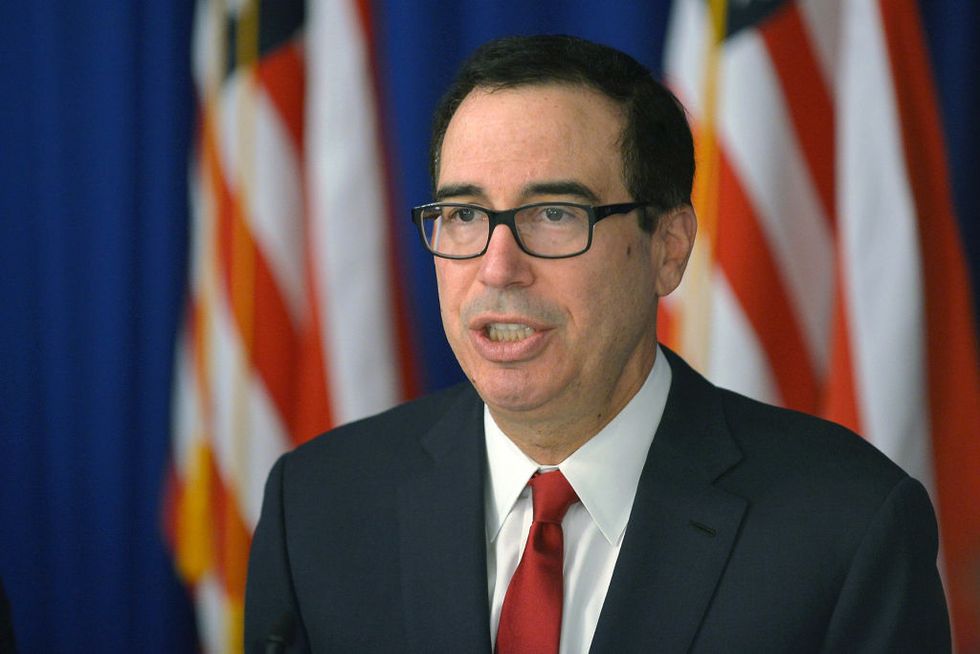 US Treasury Secretary Steven Mnuchin speaks during a briefing with the press in Buenos Aires, on July 21, 2018 in the framework of the G20 meeting of Finance Ministers and Central Bank Governors. - Mnuchin said he will be pushing China and the EU to agree to a more "balanced" relationship on trade when he meets with finance ministers at the Group of 20 convention in Buenos Aires. (Photo by STR/AFP/Getty Images)

The Dow Jones Industrial Average dropped 434 points today, a plunge of more than 2 percent, unnerving investors in what has been the most brutal week for U.S. markets in a decade. The S&P 500 and Nasdaq both fell at least 1.9 percent, too, and investors are concerned, particularly after Treasury Secretary Steve Mnuchin's call to bank CEOs backfired.

Mnuchin, who is on vacation in Cabo San Lucas, Mexico, held calls yesterday with the heads of the six largest U.S. banks to reassure investors that the markets are functioning properly.

A statement from the Treasury claimed that "The banks all confirmed ample liquidity is available for lending to consumer and business markets."

"We continue to see strong economic growth in the U.S. economy with robust activity from consumers and business," Mnuchin added yesterday.

Last Friday, a report that President Donald Trump was considering firing Federal Reserve Chair Jerome Powell, prompted Mnuchin and White House advisers to convince the president that he lacks the authority to fire Powell, a move seen as retaliation for Powell's decision to raise rates for the fourth time this year.

(1/2) I have spoken with the President @realDonaldTrump and he said “I totally disagree with Fed policy. I think th… https://t.co/pIHsfapnqk
— Steven Mnuchin (@Steven Mnuchin) 1545519761.0

(2/2) especially in light of my major trade negotiations which are ongoing, but I never suggested firing Chairman J… https://t.co/Oe5oqa3bvO
— Steven Mnuchin (@Steven Mnuchin) 1545519784.0

“It signaled a sense of panic and anxiety that didn’t need to be there,” said Brian Gardner, an analyst at the investment banking firm Keefe, Bruyette & Woods. “My first reaction when I heard it was what has happened over the last couple of days that the market does not understand or realize. Is there something that Treasury knows that the rest of us don’t?”

Political commentator David Frum suggested that Mnuchin was really "collecting quotes" from those the president respects and fears "about what firing Powell would do to markets."

Others, including journalists, legislators, and legal experts, have also criticized the move.

Tonight I "convened" with a handful of Wall St. executives and investors who are all genuinely puzzled by Mnuchin's… https://t.co/iUd7GIB0lB
— Cristina Alesci (@Cristina Alesci) 1545620988.0

I don't know why Treasury Secretary Steve Mnuchin sent his panic inspiring press release. But I do know he has acce… https://t.co/HPkKExdqwx
— Ted Lieu (@Ted Lieu) 1545674138.0

Economist Paul Krugman provided his own characterization of Mnuchin's blunder.

So many tweets going by that I can't remember who said this; but Mnuchin's intervention from the golf course yester… https://t.co/CSd3ieTpFu
— Paul Krugman (@Paul Krugman) 1545676649.0

As did comedian Matt Oswalt.

inspired by Steve Mnuchin I've decided to call my ex-girlfriend and reassure her I've totally moved on and that I a… https://t.co/BbPSHU99YT
— Matt Oswalt (@Matt Oswalt) 1545665290.0

Stock markets have soared, in part due to loose monetary policy.

"From the 2009 low to the September 2018 highs, US stocks have gained more than 280%," writesBusiness Insider's Callum Burroughs, who observes: "Slowing global growth, a trade war, and hawkish Fed policy is helping usher in what looks to be a new era for stock markets."

But none of Mnuchin's interventions appear to have had an effect on the volatile president, who renewed his attacks against the Federal Reserve in a tweet earlier today.

"The Fed is like a powerful golfer who can't score because he has no touch - he can't putt!" the president wrote.

Paul H. O’Neill, who served as Treasury secretary under President George W. Bush, says that Mnuchin is ill-equipped to handle the president––or his tempestuous personality.

“The president apparently is blaming Mnuchin for the markets going south, which is a fairly strange thing,” he said.