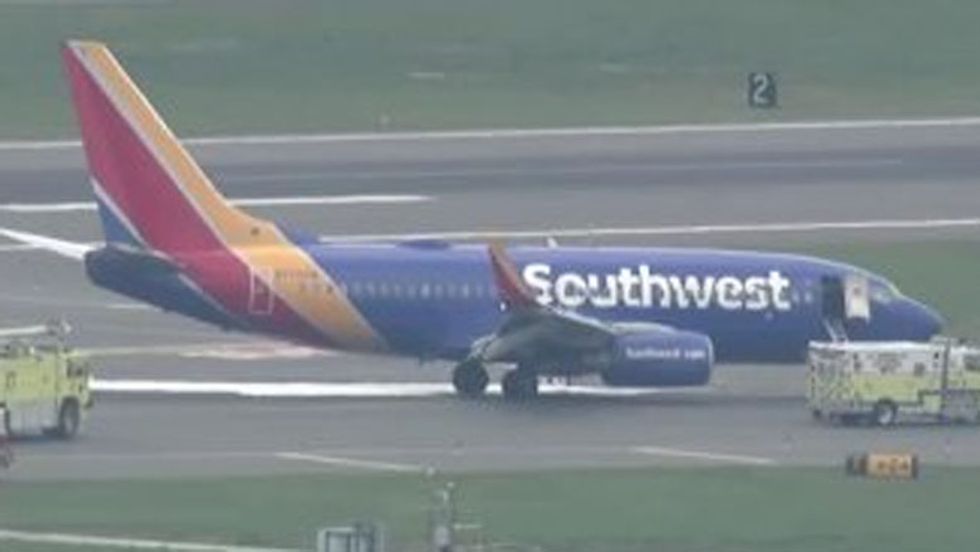 That woman has been rushed to a local hospital. Fox Philadelphia's Dave Schratwieser reports that the woman suffered head trauma and was initially listed in critical condition. Schratwieser goes on to says that seven more people suffered injuries.

The plane, a Boeing 737-700, was carrying 143 passengers and five crew members from New York's La Guardia Airport and Dallas. New York City-based pastor Timothy Bourman told the Inquirer about his experience on board, "All the sudden, it felt like we dropped 100 feet. Everybody knew something’s going on — ‘This is bad, like really bad.’ A lot of people started panicking and yelling, just real scared. We were kind of out of control for a while. It seemed like the pilot was having a hard time controlling the plane. Honestly I think we just all thought we were going down...

Passenger Marty Martinez posted on Facebook during the flight, "Something is wrong with our plane! It appears we are going down! Emergency landing!! Southwest flight from NYC to Dallas." Martinez posted two videos showing the ordeal:

Martinez added in one of his Facebook posts that a woman had a heart attack during the landing. The Inquirer report says that "shrapnel reportedly pierced the body of the aircraft."

In a statement, Philadelphia International Airport said, "Southwest Airlines flight #1380 update: Flight from LGA to Dallas Love Field landed safely at PHL and passengers are being brought into the terminal. Flights are departing and arriving but passengers should expect delays. Check flight status with your airline."

Passengers could be seen on television pictures being escorted from the flight, some on crutches. In a statement via CBS News, Southwest said, "We are in the process of transporting customers and crew into the terminal. The aircraft Boeing 737-700 has 143 customers and five crew members on board. We are in the process of gathering more information. Safety is always a top priority."