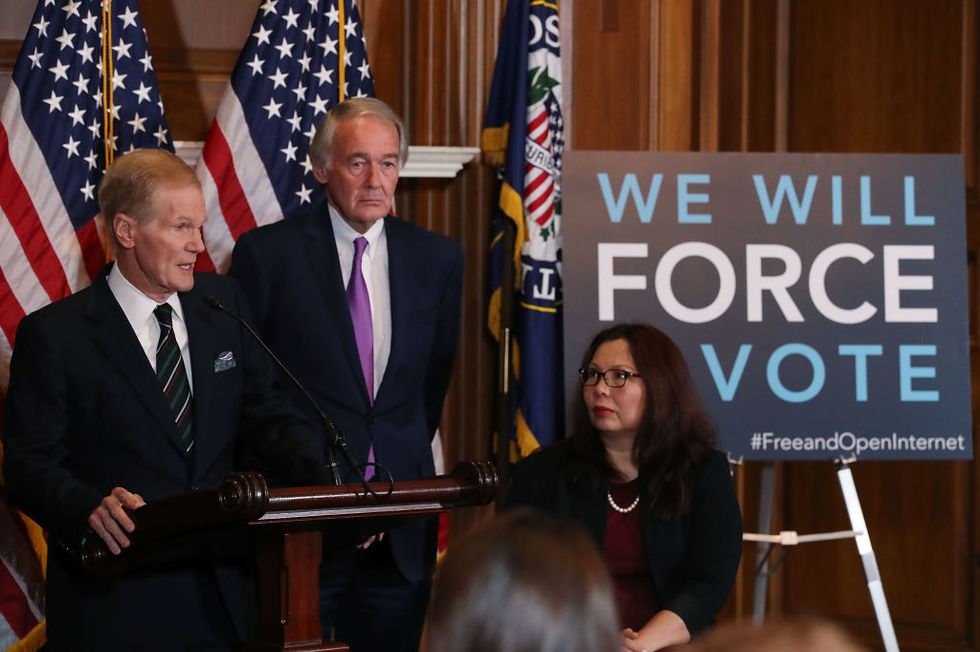 Collins announced through a spokeswoman, Annie Clark, that she would join the opposition to the deregulation of internet service providers. “She believes that a careful, deliberative process involving experts and the public is warranted to ensure that consumers have strong protections that guarantee consumer choice, free markets and continued growth," Clark said.

Joining Collins is fellow Maine Senator Angus King, who issued a prepared statement of his own: "The FCC’s recent action to repeal net neutrality threatens to undermine its positive impact by stifling innovation and putting access and connection speeds for sale to the highest bidder,” said King. “It is crucial we defend net neutrality and I will work to ensure that this misguided repeal is never implemented.”

I support @SenMarkey’s bill to defend #NetNeutrality, which is critically important to a free and open internet. My… https://t.co/FDy0wVGyWd
— Senator Angus King (@Senator Angus King) 1515510366.0

The legislation, being pushed by Senator Ed Markey (D-MA), a longtime consumer advocate on technology issues. would use Congress’s authority under the Congressional Review Act (CRA) to reverse the FCC's rollback.

The CRA empowers Congress to review, by means of an expedited legislative process, new federal regulations issued by government agencies and, by the passage of a joint resolution, to overrule a regulation. The CRA also prohibits the reissuing of the rule in substantially the same form or the issuing of a new rule that is substantially the same “unless the reissued or new rule is specifically authorized by a law enacted after the date of the joint resolution disapproving the original rule” once a rule is repealed.

"We’ve reached the magic number of 30 to secure a vote on the Senate floor, and that number will only continue to climb,” Markey said in a statement yesterday, shortly after McCaskill signaled she'd support the measure. “Republicans are faced with a choice — be on the right side of history and stand with the American people who support a free and open internet, or hold hands with the special interests who want to control the internet for their own profit.”

Lawmakers have 60 legislative days after the FCC submits its regulations to Congress to pass the CRA. The Office of Management and Budget is reviewing the repeal order. The bill will face an uphill battle due to Republicans controlling both chambers of Congress, but Democrats see a silver lining in forcing GOP legislators to take an official stance during an election year on the consumer protections, which polls indicate are popular among voters.

“Today’s news shows that lawmakers from both parties cannot hide from their constituents on this issue,” said Evan Greer, an activist with the group Fight for the Future, which has positioned itself at the forefront of the battle to squash the FCC's repeal. “Every member of the U.S. Senate will have to go on the record, during a tight election year, and either vote to save the Internet or rubber stamp its death warrant.”

Senator Chuck Schumer (D-NY), the Senate Minority Leader, said Democrats will ensure that net neutrality remains a key issue in this year's midterm elections––particularly among young voters, who have been the most outspoken about the FCC's controversial decision. "We’re going to let everyone know where we stand and they stand,” Schumer said at a Capitol Hill news conference.

Six Senate Democrats have not yet lent Markey's measure their support.

Here are the six Senate Democrats not yet signed on as co-sponsors of the #NetNeutrality-saving resolution of disap… https://t.co/Wd80UlmcJV
— Craig Aaron (@Craig Aaron) 1515559016.0

Senator Brian Schatz (D-HI) remains optimistic. "After I saw millions of people fight for net neutrality Last year I thought I understood the passion behind it. But the momentum for this legislation to save net neutrality has surpassed my most optimistic expectations," he wrote. "We can win this Senate vote."

After I saw millions of people fight for net neutrality Last year I thought I understood the passion behind it. But… https://t.co/3fB4DzL9aZ
— Brian Schatz (@Brian Schatz) 1515531977.0

FCC Chairman Ajit Pai has not commented on any of these developments. Pai sparked criticism ahead of the FCC's vote after he appeared in a video uploaded by the conservative website The Daily Caller in which he, dressed as Santa Claus, mocks his opponents, accusing them of overreacting to the possibility of repeal. Dancing alongside him was Martina Markota, a video producer for The Daily Caller who promoted conspiracy theories about a Democrat-operated child molestation ring run inside a Washington D.C. pizza shop in a blatant lie which eventually became known as “Pizzagate.”