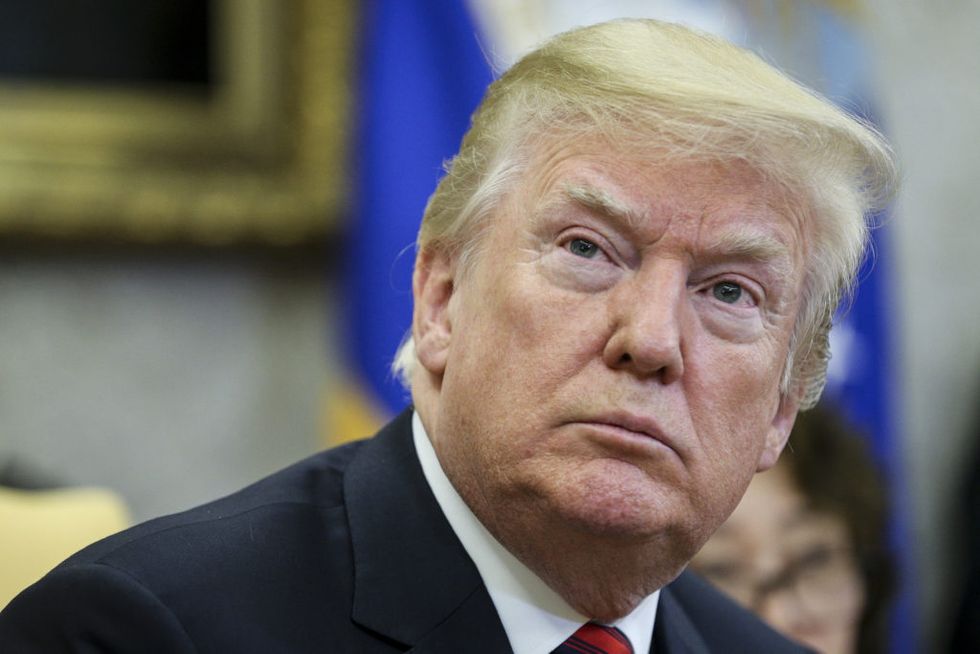 WASHINGTON, DC - MAY 22: President Donald Trump listens during a meeting with South Korean President Moon Jae-in, in the Oval Office of the White House on May 22, 2018 in Washington DC. (Photo by Oliver Contreras-Pool/Getty Images)

The Scotsman, Scotland's national newspaper, published a particularly scathing editorial denouncing President Donald Trump ahead of his visit to the United Kingdom.

"The 45th US President is an appalling human being," the editorial staff observes, before launching into an exhaustive list of Trump's transgressions.

Trump, among other things The Scotsman notes:

The Scotsman's editorial team also takes Trump to task for his penchant for decrying the media as "fake news," a mantra which many believe galvanized a gunman who killed several people at the headquarters of Maryland's Capital Gazette while already embroiled in a lawsuit against the paper.

But the president, long criticized for projecting his own guilt onto others, according to a Washington Post analysis that The Scotsman cites, "lies an average of 6.5 times a day." The Scotsman adds that The New York Times has "also tried to make a definitive list of his numerous falsehoods," and it's a list that grows each time the president composes a tweet for his millions of followers. The Scotsman quotes Rex Tillerson, who summed up the president's habit of lying in a speech he gave shortly after he was fired from his position as Secretary of State:

If our leaders seek to conceal the truth, or we as people become accepting of alternative realities that are no longer grounded in facts, then we as American citizens are on a pathway to relinquishing our freedom.

Referring back to their observation that Trump is a "sexual abuser" (or at the very least someone who gloats about fantasies in which women forfeit their consent), The Scotsman's editorial staff reminds its readers of Trump's statements on the infamous Access Hollywood tape: "When you're a star, they let you do it," he said, providing justification for groping women whenever he pleases. When the tape emerged, The Scotsman reminds us, Trump downplayed his comments, saying they were just "locker room talk." And when multiple women came forward to say he had assaulted them, Trump accused them of lying.

"Our political leaders might hide their distaste in the coming days in an attempt to get a much-needed post-Brexit trade deal," The Scotsman concludes, "but we should not forget what kind of man Trump really is."

The Scotsman's editorial went viral after it was shared by Scottish author Mark Leggat, who called the editorial "Unprecedented in 193 years of daily publishing."

The Scotsman editorial, observes one social media user, is representative of a pattern, mainly that people no longer respect Trump for the office he holds:

I think we passed a point today, where folks no longer offer any respect for Donald Trump as a result of the office… https://t.co/86CQ6nkeTz
— Daniel Sofer (@Daniel Sofer) 1531462019.0

@Mark_Leggatt Excellent article. Each time our "leaders" fail to call him out I see Chamberlain and his piece of pa… https://t.co/Pn1E8w62Nx
— isabell bowcrisp (@isabell bowcrisp) 1531476324.0

The Scotsman's editorial comes just a day after Trump said, "I think they like me in the UK" despite the threat of protests.

Galvanizing the protesters: A blimp depicting Trump as an orange, angry baby wearing a diaper which is now flying outside of British Parliament.

Trump has said he would avoid London as much as possible.

“I guess when they put out blimps to make me feel unwelcome, no reason for me to go to London,” he told The Sun newspaper. “I used to love London as a city. I haven’t been there in a long time. But when they make you feel unwelcome, why would I stay there?”

Demonstrators have inflated their Trump baby baloon in central London. The balloon is scheduled to soar over the H… https://t.co/kKfUVdOVvi
— On Demand News (@On Demand News) 1531475851.0

The president has also denied criticizing Prime Minister Theresa May, the day after he, in the same interview with The Sun, said she "wrecked" Brexit negotiations. The president dismissed the interview as "fake news."