Announcing Planet 9 from Outer Space… and it’s not Pluto 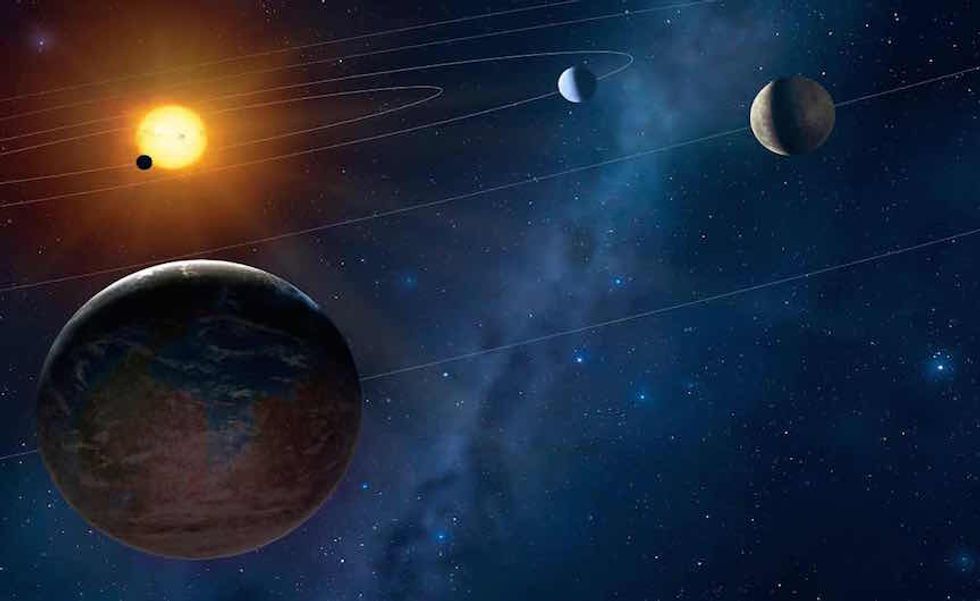 The science corner of the Internet is buzzing with news of a newly discovered planet. Billions of miles beyond Neptune, there is likely a ninth planet of significant size within our solar system, one that is most definitely not Pluto. No one, however, has seen it. We do not yet have the technology to see anything at such a distance. So how can astronomers claim the planet is out there? The same way that astronomers have done for thousands of years: by watching the collective movement of other objects surrounding the area where the new planet is assumed to be.

A ninth large planet, illustrated here, is thought to be gaseous similar to Uranus and Neptune yet smaller than both the ice giants. Credit: Source.

Ancient civilizations charted the skies and created calendars, named constellations and chronicled seasonal patterns without mega telescopes and observatories. Those early astronomers used only physical observations to make educated guesses about the universe. The ancient Greeks brought astronomy from observational science to full scientific theory, and thousands of years later, modern science confirms the historical findings. With this new ninth planet, astronomers may have more tools at their disposal, but they still must make educated guesses based on observations. While they cannot actually see the new planet, they can tell that one is there based on patterns of movement, light, the effects of gravity on the light and the movement of other interstellar bodies in the Kuiper belt.

To date, the new planet is theoretical. It cannot be officially recognized until someone spots it through a telescope. Experts say they are 90 percent certain a planet is there, but must await completion of a telescope that will allow them to view it. Currently, the world’s most powerful telescope is the Hubble, launched into low Earth orbit in 1990. A new, mightier telescope is in the works in Hawaii, set to be operational in 2022. Dubbed the TMT for “thirty meter telescope,” it will have 144 times the light collecting area of the Hubble, which may be enough to see the new planet. NASA’s Director of Planetary Science, Jim Green, reminds us of the words of the late Carl Sagan, “Extraordinary claims require extraordinary evidence.” In other words, if it is there, find it.

A small handful of astronomers took on that challenge. Chad Trujillo, an astronomer from Hawaii’s Gemini Observatory, and Scott Sheppard of the Carnegie Institute of Science, were the first to notice the patterns of movement that indicated a possible planet, and published their theory in Nature in 2014. Astronomers from the California Institute of Technology, Konstantin Batygin and Mike Brown, read the article and were dubious. Batygin and Brown (also known as @plutokiller, the man behind the demotion of Pluto from planet to dwarf planet) began the project in hopes of debunking the idea, but instead made an astonishing

discovery. The astronomers were able to infer the existence of the “massive perturber” by recognizing a pattern of movements of dwarf planets and other bodies that indicate a mass with large gravitational influence, most likely a planet. Provisionally named Planet 9, it is estimated to be two to four times larger than Earth and 20 times farther from Earth than its next closest planet, Neptune. The planet is estimated to have a 20,000-year-long orbit around the sun. Brown and Batygin speculate that Planet 9 may have been tossed out to the far reaches of the solar system by the gravitational force of the large gas giants, Jupiter and Saturn.

What happens next will depend on how well and how quickly technology can meet new demands. Due to the vast distance between Planet 9 and our sun, even the most powerful telescopes may not produce adequate visibility.

It may take years to build a telescope strong enough to view Planet 9, and astronomers will need to wait until the planet comes to a more visible spot in its unusual, oblong orbit.

Usually, the first person to definitively prove (through visual confirmation) the existence of a planet or other celestial body is given naming rights, so there is an incentive in the race to see Planet 9. People on the internet are already petitioning to name the planet after the late David Bowie, but ultimately the choice will lie with whoever sees it first.