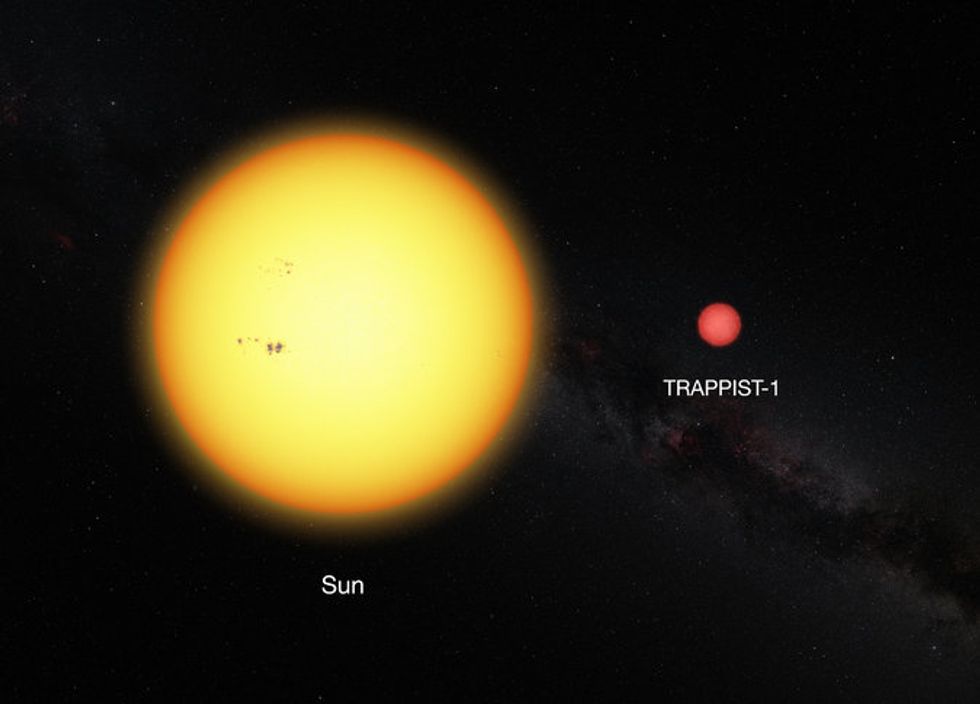 Goldilocks appears to have many sisters in the Trappist-1 System.
"Finding a second Earth is not a matter of if, but when," according to Thomas Zurbuchen, associate administrator of the Science Mission Directorate at NASA in a press conference this afternoon.

NASA announced that astronomers from the University of Liege in Belgium have found seven new planets using NASA's Spitzer Space Telescope. All of the planets may have liquid water and three of the seven planets are in area astronomers call the "habitable zone," or the area within a star's solar system that would allow the temperatures on those planets to sustain life.

The plants are part of TRAPPIST-1 about 40 light-years (235 trillion miles) away from Earth. The system was first discovered in Chile last May as a star with three orbiting planets. Today's announcement, published in Nature, brings the number of planets to seven. What astronomers thought was the third planet was, in fact, four additional planets.

The NASA press release quotes Michael Gillon, principal investigator and lead author of the paper, as saying, "The seven wonders of TRAPPIST-1 are the first Earth-size planets that have been found orbiting this kind of star. It is also the best target yet for studying the atmospheres of potentially habitable, Earth-size worlds."

These seven planets are around the same size as Earth and their density means that they are likely to be rocky. Astronomers will continue studying them to determine the makeup of their atmospheres and the possibility that the same side of the planet may always face the TRAPPIST-1 star. This would result in very different weather patterns than those on Earth.

Because of the distances involved, astronomers cannot simply look at a star and find an exoplanet (a planet orbiting a star beyond our solar system). Instead, they have to watch for the times the planet moves between the star and Earth during its orbit.

It took 21 days of almost constant observation with the Spitzer Space Telescope and additional observation from telescopes in Morocco, Hawaii, South Africa, Spain and England to identify the seven planets announced today. Astronomers used these observations to determine the planets' distance from the sun and their size. They were also able to approximate the mass and density of some of the planets.

The planets are all closer to the TRAPPIST-1 star than Mercury is to our sun, but their star is an ultra-cool dwarf star colder than our sun. This is what would allow all seven planets to have liquid water. They are also so close to one another that a person standing on one would have a view "like seeing the features you're able to view on our moon from Earth," according to NASA's Twitter account.

Researchers are already using the Hubble Space Telescope to continue learning about the discovery. They anticipate obtaining even more valuable data from the James Webb Telescope scheduled for launch in 2018. The Webb telescope will be able to detect the chemical components of the planets' atmospheres and will provide more detail about the temperatures and surface pressures. This information will be key to learning more about whether the planets are habitable.