Sarah Sanders Just Defended Donald Trump's Claim That You Use an ID at the Grocery Store, and It's Classic Sarah Sanders 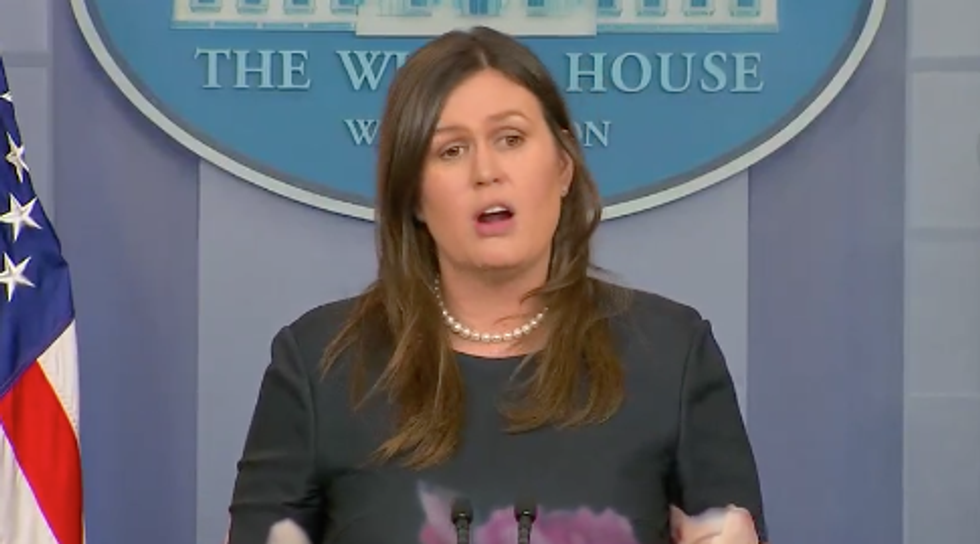 Though White House press briefings are becoming increasingly rare, Sarah Huckabee Sanders found herself taking questions at the podium on Wednesday, the day after President Donald Trump's raucous campaign rally in which the President claimed that Americans need an ID to buy groceries as a way to bolster support for restrictive Voter ID laws.

Sanders was subsequently asked at Wednesday's press briefing about the President's last time in a grocery store.

"Certainly, if you go to a grocery store and you buy beer and wine, you're certainly going to show your ID."

And when asked why he would buy beer and wine at a grocery store when he doesn't drink, Sanders replied "He's not saying every time he went in. He said when you go to the grocery store."

The President's full remarks were:

Sanders defended him, insisting that anyone who'd been to a grocery store and purchased beer or wine most likely had to show identification. And in what's become her standard method for evading a question, Sanders redirected the reporter to another entity, though this time it didn't seem as smooth, with Sanders saying, "If they didn't show ID, that's probably a problem with the grocery store."

While it's true that grocery stores are supposed to request identification in transactions involving beer or wine, Press Secretary Sanders didn't address why the president said "groceries" instead of simply "alcohol."

Sara Huckabee Sanders @PressSec contends all trips to the grocery store include purchases of beer and alcohol and t… https://t.co/fIQIlaysEz
— LW (@LW) 1533151091.0

Even if that's exactly what Trump meant, using the regulation of alcohol as an argument for greater regulation of voting isn't exactly apt.

Comparing voting restrictions to the regulation of a controlled substance is an oversimplification commonly made with voting.

After the Supreme Court of the United States struck down a crucial clause of the Voting Rights Act in 2013 that required states with a history of voter suppression to register changes of voting laws with courts, many of these states saw an uptick in restrictive voting measures, many of which included increased ID laws.

Hispanics are affected the most: Turnout is 7.1 percentage points lower in general elections and 5.3 points lower in primaries in strict ID states than it is in other states. Strict ID laws mean lower African American, Asian American and multiracial American turnout as well. White turnout is largely unaffected.